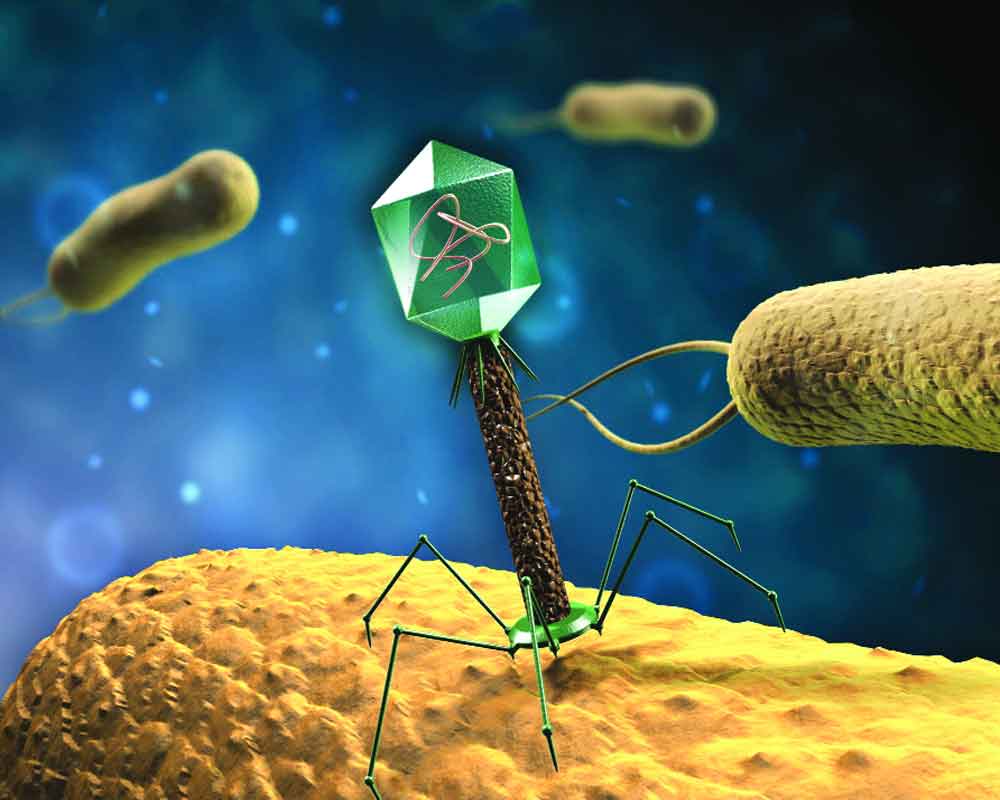 Bacteriophages are used to infect and kill pathogenic multidrug-resistant bacteria. ARCHANA JYOTI brings you a report on how the therapy has become talk of the town

Like many hospitals across the world, Vellore-based Christian Medical College (CMC) too is grappling with infectious bacteria (Supebugs) that resists anti-biotics.

The doctors at the CMC hospitals have decided to try Phage therapy, wherein nature’s anti-biotics — Bacteriophages are used to infect and kill pathogenic multidrug-resistant (MDR) bacteria. The therapy is already in use in various countries like Russia and Georgia but in India there is no regulatory framework.

“Every year we are losing at least 30-40 per cent of our patients to the Superbug. Since there is no regulation for Phage therapy here, we will approach regulatory bodies — Indian Council of Medical Research (ICMR) and Drug Controller General of India (DCGI) to conduct clinical trial on our patients suffering with bacterial infections to ascertain therapeutic potential of Bacteriophages on bacteria like escherichia coli, klebsiella pneumonia and enterobacter cloacae,” Dr Biju George, Professor of Hematology, CMC says.

“We plan to collaborate with the Vellore Institute of Technology (VIT), Vellore,” says Dr George. However, CMC hospital is not the only medical institute that is trying to explore Phage therapy to save patients afflicted with drug-resistant bacteria. Scientists and researchers are conducting trials at the institute and university level on Phage therapy as an alternative to antibiotics.

Found in the wastewater treatment plants as well as in sewages where bacteria also harbour, Phages are the only therapeutic agent that amplifies itself at the sites of infection and is cleared when the infectious bacteria have been killed.

“We are excited about this therapy. We need to have national repositories of diverse and well-characterised virulent Bacteriophages  that can kill drug-resistant clinical isolates and purify them for therapeutic standards and do clinical trials. Phage-derived enzymes (lysins) are also being developed as promising antimicrobials,” she says adding that concerted efforts are required from all the stakeholders to understand the challenges and to begin with, facilitate this therapy for those patients who don’t respond to antibiotics anymore.

Dr Gopal Nath from the Microbiology Department at the Banaras Hindu University (BHU) has used Bacteriophages to treat chronic wounds that don’t respond to standard treatment. “The creation of a biofilm by the bacterium is the problem as this does not allow the antibiotic to penetrate the wound.  To work around this, we used a cocktail of customised Bacteriophages effective on Escherichia coli, Staphylococcus aureus, and Pseudomonas aeruginosa isolated from the wounds of 20 patients between the ages of 12 and 60,” he explains.

Ramesh Nachimuthu, Assistant Professor at the VIT says, Phage therapy is not a new phenomenon. It was first explored more than a century ago and is still used in Russia, Georgia and other European countries. The developed nations like the US and the UK ditched it in favour of antibiotics. However, with AMR becoming a tough nut to crack, the western world too is showing interest in this new weapon against the bacteria.

Last year, Belgium and France also took a decision by permitting the Bacteriophages as antibiotic treatment isn’t getting anywhere for the pharma companies not much research is going on in the sector.

“It is time to turn to Phage  therapy.  But unless we have a clearer legal framework in India, all the research work will remain confined within the labs only,” Nachimuthu says.

Talking about how the Phage works, he explains that by making a cocktail of Phages, it would become easy to treat a wide variety of bacterial infections that are otherwise resistant to the latest generations of antibiotics. At the same time the versatility of Phages would allow us to use the antibodies against the bacteria that have been displayed on the Phage surface.

Similarly a protective antigen could be delivered as a DNA or Phage display vaccine. So, a mixture of Phages that are modified genetically would be more helpful in addressing all these problems.

Pranav Johiri who is the first Indian to have undertaken treatment of Bacteriophages in Georgia has set up Vitalis Phage Therapy in partnership with the Eliava Phage Therapy Center to help people get this therapy when anti-biotics fail.

“We are also working towards tying up with local diagnostic laboratories to conduct Phage sensitivity tests on bacterial cultures. This will reduce the time taken for testing and make it easier for patients suffering from bacterial infections to take Phage therapy,” he says and tells you that they have facilitated both ways of treatment for Indian patients — in-clinic as well as distance.

The cost of the treatment is almost equivalent to the amount spent on anti-biotic treatment.

Dr Nath opines that more doctors should come forward to accept the phase therapy for the benefit of their patients suffering with bacterial infections.

Shrikant Pawar, scientist from Pune based National Centre for Microbial Resource which has been given the mandate to implement the National Mission on AMR on behalf of the Science and Technology Ministry, terms the Bacteriophages as a promising technology as it can get rid of resistance culture that might be residing in someone’s body. People suffering from urinary tract infections, kidney infections and prostatitis have taken Phage therapy and have seen successful eradication of their infections.

Besides, there are some concerns about its use such as safety and efficacy issues, as well as immune response to the administered Phages. Growth optimisation and purification strategies of Phages are also some issues that needs to be addressed.

But that will be possible only if we start working on this important therapy that have enormous potential to give relief to the patients infected with deadly bacteria, say the scientists.