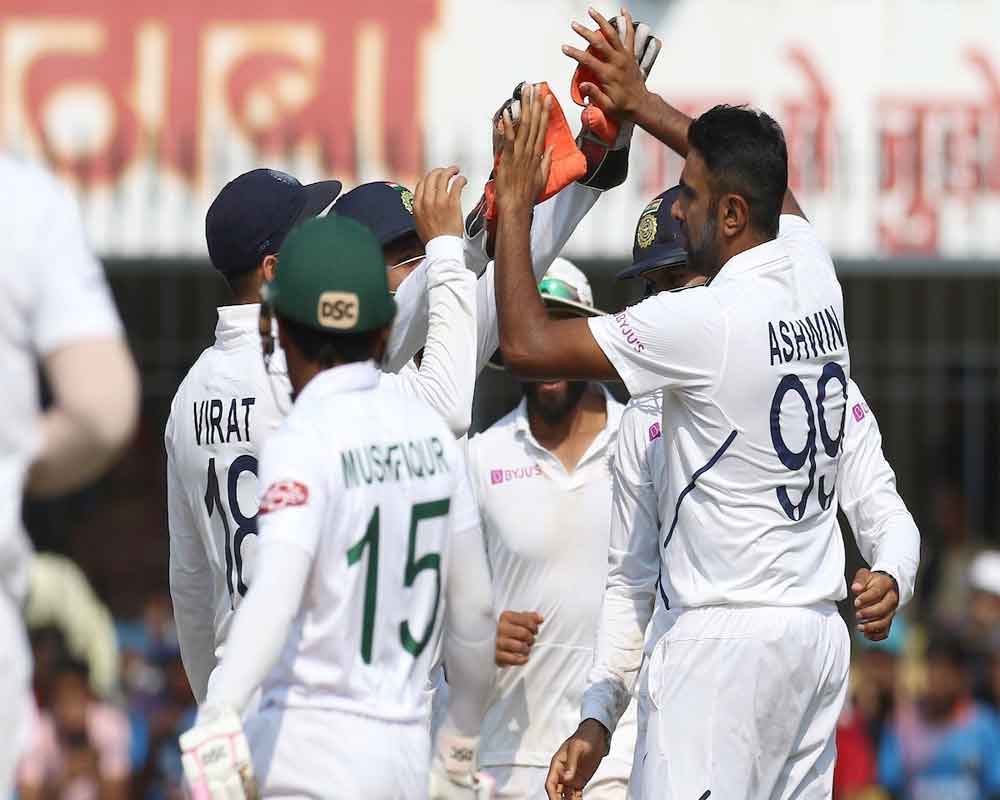 Senior-most player Mushfiqur Rahim scored a gritty half-century as Bangladesh delayed India's march to victory, reaching 191 for 6 at tea on the third day of the first Test here on Saturday.

India declared their first innings at overnight score of 493 for 6 to let their pace attack make effective use of the conducive conditions and the move paid off as Bangladesh still need 152 runs to avoid innings defeat.

Mushfiqur went into the break undefeated on 53 off 114 balls in company of Mehidy Hasan Miraj, batting on 38 off 54 balls. The duo has added 56 runs for the seventh wicket. The other significant stand was 63 between Mushfiqur and Liton Das (35).

After conceding a 343-run first innings lead to India, it was another horrendous start by the battered Bangladeshi batsmen as Umesh Yadav (1/42 in 11 overs), Ishant Sharma (1/31 in 11 overs) and Mohammed Shami (3/25 in 11 overs) kept the visiting batsmen on tenterhooks.

In the post lunch session, Shami got his third wicket, removing Mahmudullah (15), who gave a regulation catch to Rohit Sharma in the slip cordon.

Liton and Mushfiqur played the spinners well in the post-lunch session as the wicket eased out. However, Liton paid for his impetuosity, giving Ravichandran Ashwin his 360th Test wicket.

In the morning session, it was Umesh's perfectly pitched outswinger (inswinger for left-hander), that got rid of Imrul Kayes (6), who looked like getting out to every delivery that he faced. The ball tailed in and uprooted the leg-stump.

Young Shadman Islam (6) was beaten by both pace and movement with Ishant getting one to nip back from length as it hit the top of middle-stump.

Bangladesh's best bet, skipper Mominul Haque (7) was jittery from the start and survived a DRS call while trying to leave a delivery pitched on off-stump. However, when Mohammed Shami angled one into him, Mominul was adjudged plumb in-front even though Virat Kohli had to take a review which was successful.

Shami then hurried Mohammed Mithun (18) with a beautiful short ball that he grew big on him as he tried to play the pull shot. The result was a simple catch to Mayank Agarwal at mid-wicket.

The two senior-most players Mushfiqur Rahim (9 batting) and Mahmudullah (6 batting) shakily continued till the lunch session to delay the inevitable.

It could have been five-down had Rohit Sharma not dropped Mushfiqur in a regulation catch in the second slip off Shami's bowling. The catch was coming straight towards Kohli but Rohit instinctively moved towards left and it popped out of his hands.