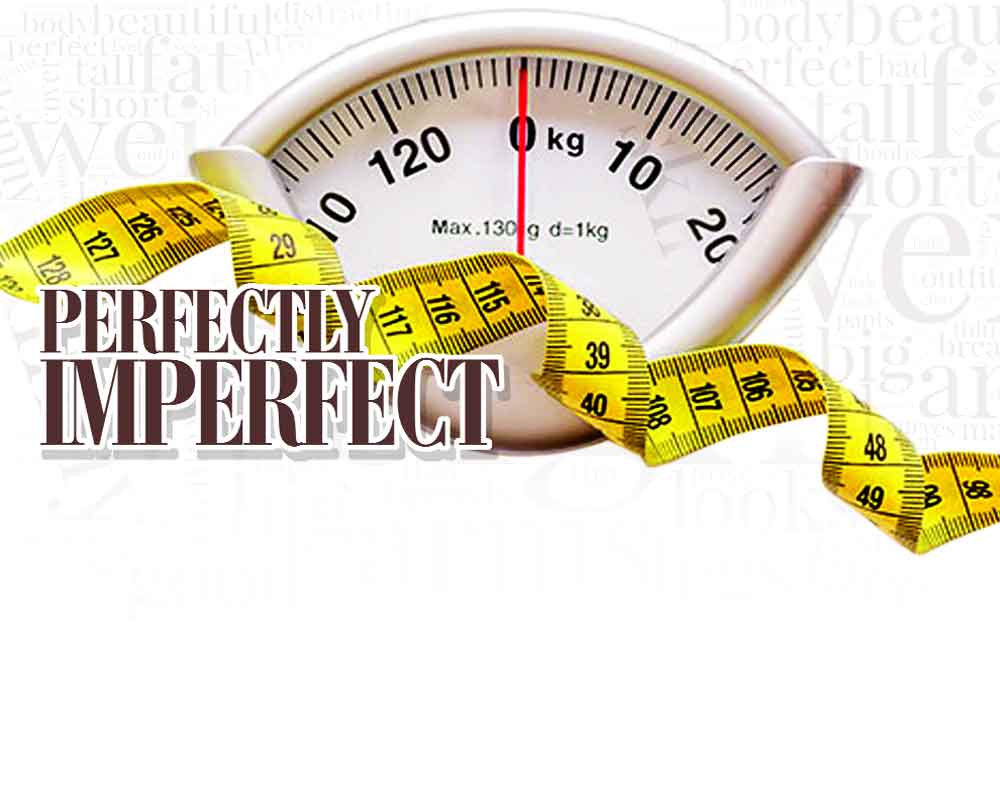 In a world driven by social media appearance pressure, being thin does not necessarily translate into being healthy and vice versa. It is time to own up to ourselves, stop body shaming and focus on lifestyle corrective measures that promote good health, writes Kavita Devgan

Probably half the world thinks they are fat. And this day and age, when vanity scores over everything else, a feeling such as this may weigh heavily on many bodies and mind. We live in an image-heavy society — online and in person — where social media, advertisements in magazines, newspapers, billboards, shopping windows, and everything around us ensures that focus on appearance is stronger than ever. And because our society loves thin, be it in print ads, movies, music videos, pictures etc., seeing something different isn’t considered fashionable. Often, not meeting the criteria induces inadequacy among people, especially the youth and now even middle-age.

So rampant is the negativity arising from the ‘perceived’ faulty body size that it works both ways. People too thin are feeling the pain as well. The greetings these days are punctuated with a comment (and scrutiny) on one’s ‘weight’. And that does not apply to the ones getting married! The modern Indian obsession of “when are you getting married?” is now replaced with “What are you doing with your weight?”.

Shamed at home and by the world

Let’s accept it, body shaming is of two types: direct (criticising overweight people), and indirect (both subtle and blatant messages that the society throws via environmental cues and via media — visualise toothpick thin models here?).

Even the “well wishers” tend to go wrong here. More often than not, body shaming starts at home — a sister shaming her brother into lose weight so he can score a good-looking girlfriend; a father packing off her 24-year-old daughter who has just finished her medicine studies for a strict three month ‘get thin’ programme at a health farm, as he intends to find her a match soon; a friend poking fun of someone’s losing battle with weight in public or a colleague sniggering at someone going for a second helping of the dessert… These are all real life instances that one has encountered in one’s practice as a nutritionist. The effect on a person’s body image and self esteem is an instant negative.

Contrary to what that “well wisher” may believe, fat shaming does not help people stop and reconsider their lifestyle patterns. On the contrary, it makes them eat even more and throws them in a vortex of hopeless diets, which actually worsens the situation. Studies suggest that there is a profound psychological impact (harm) of the condition. It can induce severe stress in the body, cause depression, eating disorders, reduced self-esteem and raise the risk of all sorts of mental problems.

Alexia Michel knows this all too well. This French national corporate stalwart quit her lucrative job to start a foundation ‘I am not my anorexia’ recently. Michel struggled with anorexia all through her growing years, till recently when she managed to leave her disorder behind with the help of yoga and transcendental meditation. Through her foundation, she is now working to help others suffering from an eating disorder. The foundation extends help to support recovery and prevent these disorders via a natural, holistic and empowering programme, both online and offline. To this effect, she recently organised her first knowledge sharing seminar at Maharishi hospital in Delhi and has a retreat planned in Delhi and Rishikesh in October.

Then of course there are the market forces that stand to gain from this insecurity. While fat to fit may be a good mantra for leading a healthy lifestyle. Fit is being deliberately replaced by thin. The paranoia to gain a certain figure or size is causing wellness, fitness and aesthetic industry to grow. Conceded not all institutions falling under these heads follow dubious processes, but there are some that push people into spending by playing with their insecurities.

Trisha Khanna was referred to a leading dermatologist in the city by a physician for the treatment of alopeacia. The dermatologist, as she discovered, also runs a swanky aesthetic and wellness centre in an upmarket locality. “To my surprise, before I could even utter a word, the doctor had suggested I could shed off excess weight around my waist, chin and arms using one of their fancy machine treatments and gave me a fat quote! She was not even interested to find out my medical condition or the real reason why I was there in the first place,” shares Khanna. The facility, she adds, was buzzing with women of all age  booking for treatments including fillers and body sculpting procedures. Khanna went home with a shampoo and conditioner worth Rs 10,000 and is hoping that her condition will get treated soon.

“A lot of people want to lose weight quick without putting any effort,” says Dr Priyanka Tyagi, a Delhi-based dermatologist and aesthetician. “Obesity is a condition and what would work for someone suffering from an acute condition is definitely not recommended for someone who is otherwise healthy but has a few fat pockets that the body has cultivated to fight toxins and other conditions. Same applies to their skin. The race to get that flawless skin is often tempting people to use products that are otherwise meant to treat serious infections.”

As a nutritionist and weight management consultant, I have personally treated cases where perfectly healthy patients have been suffering emotional trauma and feeling of worthlessness due to a certain shape of body that they may own.

Own up to yourself

Because we all need to understand that we are not defined by just our weight alone. We walk and live as ‘us’ which is a sum of a lot of our facets — our personality, our achievements, our disposition and the vibe we emit. Definitely, how we look is a part of this package. Only, we seem to have made it our complete being.

For starters, this is what you must do — keep your weight and appearance aside, and flaunt your other assets and plus points, and see how others pick up on that. You’d be amazed to see the how a chain of positivity is triggered.

Two, there is a big misconception about the thought process. There is a big section of people who believe that by being super critical of their bodies, they might be able to push themselves into losing weight. Called ‘body hate’, it is now acknowledged by the experts as a mental epidemic. A lot of these people end up hurting themselves as a result of faulty diets, extreme exercises, stringent detoxes and negative self talk. It actually works the other way around. The weight actually piles up, instead of shedding. Even worse, their mind gets trapped in an eating disorder (like anorexia, bulimia or binge eating). The more you chain yourself in stringency, the more the mind and the body will rebel. Train your mind to think healthy and work on your lifestyle and see the change.

Body positive is a movement. And this is not to be confused with encouraging an unhealthy lifestyle. There are people like Shuchi Singh Kalra who are writing against body shaming. Kalra’s 2016 book ‘I am Big. So What!?’ is about a plus-sized girl and her journey from an insecure teen to a confident young woman. Her story explores body image and self-esteem issues, and how she navigates the society at different stages of her life, wearing her size proudly on her sleeve.

Incidentally, Kalra herself was the inspiration for the book. “Having been at the receiving end of it, as several of my friends and people I know, it was my voice to the plus sized girls,” she shares. True, plus-sized girls have been severely under-represented in Indian mainstream fiction, but writers like Kalra are making sure that the pattern is broken.

‘Body Respect’ by Linda Bacon and Lucy Aphramor speaks of body insecurity and how it is time to overcome the shame and distress surrounding it. And to show everybody respect. Another book, ‘The Gifts of Imperfection’ by Brené Brown holds powerful messages surrounding body image.

Written word has an impact, both negative as well as positive. Kalra shares that she was most touched by an email from a father who bought the book as a gift for his daughter who lacked confidence because of her weight. It shows that the thought pattern is changing and people are reaching out to those affected.

Women magazines with photoshopped women on cover, celebs talking about their ‘diets’ and pursuit for thin-ness, fitness articles taking about the latest fad diets, movies showing heroes falling for thin, pretty girls, all leave a mark on developing psyches of children and teenagers.

Amidst this seemingly popular content, celebs talking about their struggles lend an insight into real situations. Actor Richa Chadha deserves kudos for coming out as a bulimic in 2016 (bulimia is a disorder when people purge out the food via vomiting or by using laxatives in an attempt to not gain weight) when no one expected her to, simply because she wanted to help remove the stigma the eating disorders face in our society. She disclosed details of her battle with the disorder and how she alternated between feeling guilty about being hungry, then staying hungry for long hours and breaking off only to binge on protein bars. Not everyone is that strong though. She is now writing a book on it.

Taapsee Pannu, an actor known for her selection of intelligent roles (her role as an undercover operative in Baby had the audiences floored), is very clear on the subject. During an interview on how she got her new svelte self, she confessed to being unaffected by any of the drama surrounding fitness and doing her own thing. “How can you let others decide whether you are thin or fat, pretty or ugly? These are subjective terms and hardly important. Ideally, we should aim to feel healthy from within, and active and energetic throughout the day. That is the only thing that is important,” she says.

The process of weight correction cannot and should not be stressful. In fact to be successful, it has to be far from that. And body shaming (leading to punishing diets and self inflicted pain) works in exactly the opposite direction. While good and correct information is important, no one needs a sermon in self-improvement (eat well, sleep well, exercise right etc). What works best is to begin a journey on the path of improvement, slowly but surely by informing oneself right. Sedentary lifestyle is the biggest bane of all and main culprit behind failing health. Correct your lifestyle patterns. Work on nutrition rather than diet. Set your own goals, your own pace with the only condition being not to fall off the path. And make it happen.

Most important, change your thought process — the way you look at people, what you consider healthy. Stand up for a friend who is being picked on for her (big or small) size, stay clear of businesses that body shame and sell “ideal body type” to people. There is no ideal body type. Just that you are either healthy or not.

— The writer is weight management consultant, nutritionist and autho