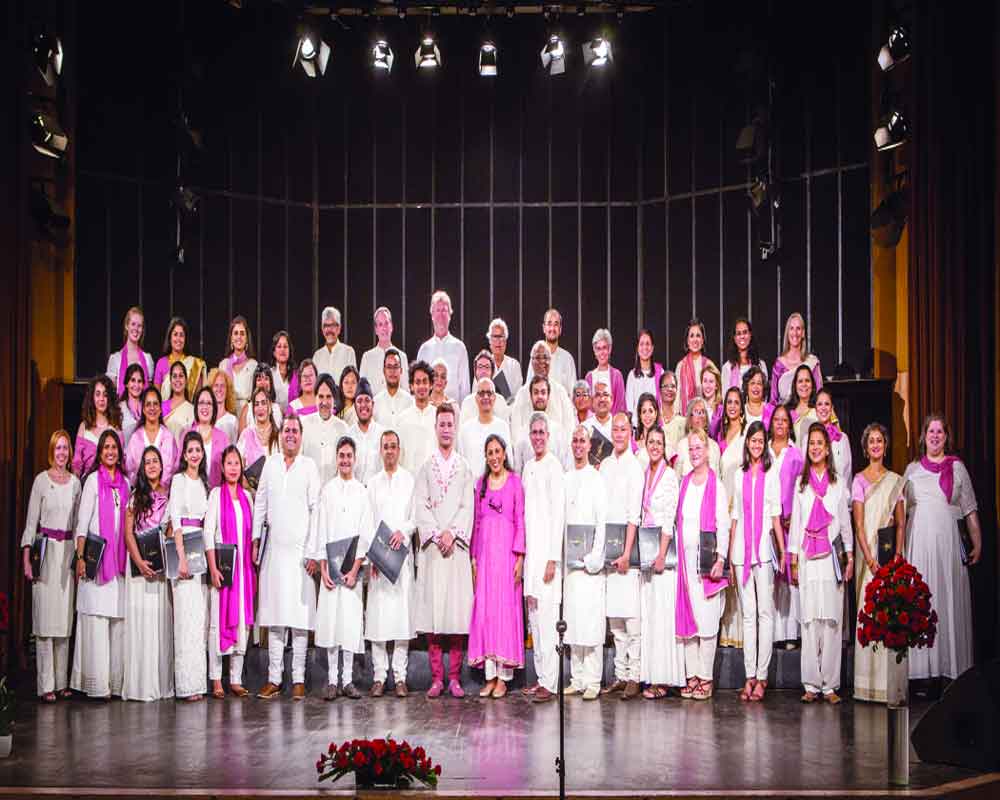 The Capital City Minstrels is celebrating its 25th anniversary. SHALINI SAKSENA speaks with singers and the conductor about the growing popularity of choir singing

Think of choral singing and one would imagine a church. But one couldn’t be more wrong. The Capital City Minstrels (CCM) which is celebrating its silver jubilee in the Capital is a case in point that choir singing is not just restricted to churches anymore. The journey of how CCM from 10 members stands at 60 singers, is an interesting one.

Back in 1994, when the Women’s International Choir (WIC) performed their last concert, most people thought it was the end of the choir scene in Delhi. But some of the singers decided to band together and meet once a week for rehearsal to fill the gap left by the WIC. Led by Zohra Shaw, a pianist, the small group of 10 people met over tea and snacks and practiced a Christmas repertoire, in the hope that they would get the chance to perform at one of the many Christmas functions in the city. Not long after they received their first invitation to sing, performing in Delhi on December 14, 1994.

News spread and new singers joined and The Capital City Minstrels was born. Shaw, founded and conducted the group until 2000, after which the choir has been led by various conductors from across the world each leaving their mark on this diverse group. It has been 25 years and the group has grown from 10 members to 60 choristers, ranging in age, profession and nationality.

Over the years, there have been 12 conductors who have led the group The best part of this silver jubilee celebration is that the choir will see the return of some of them. From America: Alex Heetland and Diane Pritchett; from Great Britain: Fiona Hedger-Gourlay; from Hungary: Gabriella Boda-Rechner; from Germany Carolin Remy and from Russia: Nadya Balyan. They will be conducting some of their popular work. Besides this, several singers from across the world also returned to join the present choir in concert.

Sharmila B Livingston, who is on her third stint as a conductor for the CCM tells you that she joined the group 22 years back as a singer.

“Shaw started the choir. She is an accomplished musician. She wanted to start a choir of her own. It all began with performing at small gatherings. Interest grew and attracted people from all walks of life from doctors to lawyers to engineers to students to diplomats. Also, over the years, the choir has been conducted by conductors from Korea, France, Hungary, Germany, Great Britain and even the US. During Zohra’s the used to sing sacred classical music. Over the years, it has expanded to all kinds of choral singing,” Livingston says. She tells you that she started with Shaw as part of the choir and a  soloist. Then came a time when the group needed a conductor and Livingston stepped in. “I did a season and then I left since I didn’t want to conduct back then. Recently, the group called me back and has done three seasons which spans one-and-a-half years. The group has a summer and a Christmas concert,” Livingston says and tells you that this time the theme is Joy: A Season to Celebrate.

There are a few reasons why CCM has survived for so long is for a couple of reasons. First, it is secular in nature and other styles of music. Second, people who enjoy music are looking for opportunities to have an outlet and exposure to learn and experience music. There are very limited opportunities where people can sing if they are not a soloist. The beauty of a choir is that one doesn’t have to be a soloist to sing. You just need to have joy and love for music and contribute to the overall sound. This is a freeing aspect of choral singing.

Livingston tells you that over the years, the audiences have changed but people have not. “Audiences have changed since people today travel all over and have been exposed to all kinds of singing and enjoy a wider spectrum of music. What has not changed is people who had limited choices before, will come in to expect a certain kind of singing and be disappointed if they don’t hear what is familiar to them. There are some who come in and want to hear new sounds. We have to cater to bother sides,” she says.

Annie Sinha, a choral singer, tells you that after her retirement, she is now devoted to the choir. I joined the group 11 years back. I have always been interested in music but was waiting for my daughter to complete her Class XII. Though I have not had a formal training in music, I do know how to read the music notes. It was not very difficult for me to get into the group but had to give an audition,” Sinha says.

Some of the changes that have taken place are: The soul of the choir has grown. “The activities have become streamlined. There is an executive committee that meets to organise the concerts. I was the president of the choir for four years till I vacated the seat last December,” she says.

According to Sinha, the growing popularity of choir singing is the genre of music they present. “It is not only classical or just pop. There is mixed fare which appeals to all kinds of people. We sing with a lot energy and are able to connect the audiences. The fact that a choir won India’s Got Talent Khoj 2 meant that people are familiar with choral singing. Word of mouth and social media has also helped,” Sinha tells you.

Abhishek Gogna, is a piano teacher with Theme Music, Gurugram. “I was studying Physics when a junior, who was part of the choir, introduced me to CCM in 2016. But due to academic reasons I had to defer it to 2017,” Gogna says.

While the sheer numbers of the choir can be daunting, the good part, Gogna tells you is that everyone looks out for the other instilling a sense of the community. Gogna who joined the choir as a singer, but stepped up when the choir needed a pianist. “Beginning of this season, they needed an accompanist full-time. However, I will also be a part of the choral singing,” Gogna tells you.

He has been part of this style of singing since his school days. “I have never been a soloist. Even dueing my school, I was part of a choir. So I have had a fair bit of experience of choral singing,” Gogna says.