Vastu for a good match

Vastu for a good match 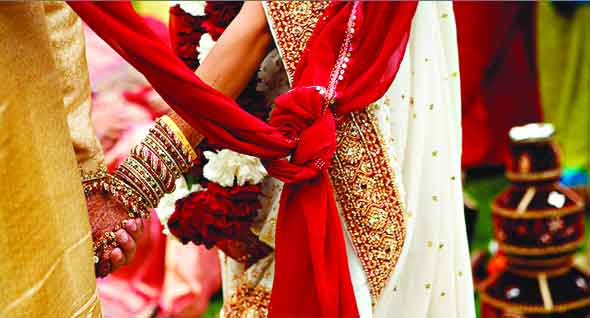 For those stressing over delay in marriage, Vastu Shastra offers some tips, writes Sagar Chug

According to Vastu Shastra, every emotion that arises within you is generated by the energy emitted through the 16 zones or directions of your home. These zones are governed by the five elements (Panchtattva) — Earth, Fire, Water, Air and Sky. It is believed that these elements are responsible for creating a harmonious environment, in turn influencing everything around us. When these elements are out of proportion, they lead to negative forces overriding the positive ones; creating a field that makes your thoughts and actions negative, resulting in delays.

South-West is the zone of relationship, family, marriage and stability in life. If this zone is disturbed by a toilet, anti-activity, or an anti-element, then it will not only delay marriage, but can even spoil a marital relationship. First strengthen the South-West zone; if this corner is missing, then the marriage proposals will not be successfully finalised. A kitchen in this area will also destroy marriage possibilities and disturb the relationships established.

The South-East is the zone of fire. This zone should be treated, as it has the sacred fire that binds two people in marriage and blue colour from this zone must be removed as it will delay in marriage and disturb relationships. If this corner is cut or missing, or if there is an anti-fire activity in it, in such cases, a possible engagement will not convert into marriage. Here’s how it flows: the relationship may start well as the South-West (SW) is fine, but since the South-East (SE) zone energy is poor, it will not continue or end properly.

Without the support of a partner, no relationship can exist. And this comes from a well-activated and healthy North-West area. This is the third significant vastu zone for the marriage area. You must also clear North-East vastu zone. Doing so would remove adamant thoughts of getting married to a very specific personality and family. If the North-East is clear, clarity will be maintained about what you really want.

Placing a pair of Love Birds in South-West zone would attract the right person into your life. A picture of a loving couple may also be placed along with the Love Birds. The bedroom direction of a girl plays a crucial role in her marriage timing. As per vastu, a girl of marriageable age should sleep in the West Zone of gains. Choosing to sleep in the South-South-East area would make her more confident and having a bedroom in the South-West area would make her a desirable partner for her future husband. She should, however, never have her bedroom in South-South-West zone of disposal. In addition, if the girl sleeps in attraction’s zone of North-North-West, it will help her get new marriage proposals.

Similarly, North Zone is zone of opportunities, bachelors should preferably choose this space to sleep. Always avoid having a water tank in your house’s South-West zone of relationships as this could lead to delay in marriage.

The writer is an astrologer and Vastu expert