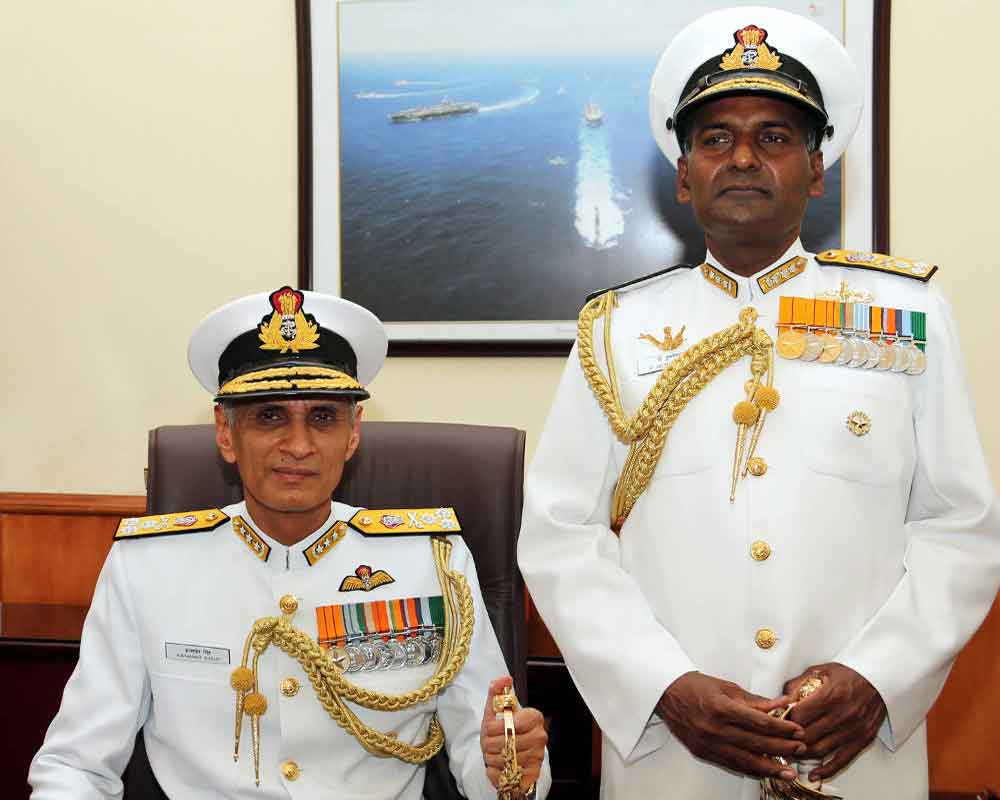 Admiral Karambir Singh on Friday assumed charge as the 24th chief of the Indian Navy, becoming the first helicopter pilot to helm the force.

He succeeds Admiral Sunil Lanba who retired after a distinguished career spanning over four decades.

Before appointed to the top post, he served as the Flag Officer Commanding in Chief (FOC-in-C) of the Eastern Naval Command in Visakhapatnam.

As Navy chief, Admiral Singh's immediate priority will be to expedite the long-delayed modernisation of the Indian Navy, including by inducting new warships, submarines and aircraft.

Admiral Singh is also expected to focus on expansion of India's presence and overall influence in the Indian Ocean region where China has been fast increasing its presence.

His promotion was challenged by Commander-in-Chief of the Andaman and Nicobar Command Vice Admiral Bimal Verma on grounds of seniority.

However, the Defence ministry rejected Vice Admiral Verma's petition following which he approached a military tribunal.

The Armed Forces Tribunal here allowed Admiral Singh to take charge as the new Navy chief, holding that his continuation will depend on the final outcome of the case. The next date of hearing in the case is July 17.

Admiral Singh is scheduled to continue in the post till November 2021.

An alumnus of the National Defence Academy in Khadakwasla, he held various key positions in the Navy in a career spanning over 39 years.

Commissioned into the Indian Navy in July 1980, he earned his wings as a helicopter pilot in 1981 and has flown extensively on the Chetak (Alouette) and Kamov helicopters.

He is a graduate of the Defence Services Staff College, Wellington and College of Naval Warfare, Mumbai.

He has also served as the Fleet Operations Officer of the Western Fleet. Ashore, he has served at Naval Headquarters as the Joint Director Naval Air Staff, and as Captain Air and Officer-in-Charge of the Naval Air Station at Mumbai.

On promotion to flag rank, the Admiral was appointed as the Chief of Staff, Eastern Naval Command.

In the rank of Vice Admiral, he was also the Director General of Project Seabird, looking after infrastructure development of the Navy's modern base at Karwar.

His other important flag appointments include Chief of Staff of the Tri-Services Unified Command at Andaman and Nicobar Islands and Flag Officer Commanding Maharashtra and Gujarat Naval Area (FOMAG).

He is the first helicopter pilot to become Chief of Naval Staff.

Admiral Lanba, who retired on Friday, was an ardent supporter of tri-services Jointmanship and was instrumental in harmonising the efforts of the three Services in a number of critical areas.

The Navy chief retires after a three-year tenure or after attaining 62 years of age, whichever is earlier.