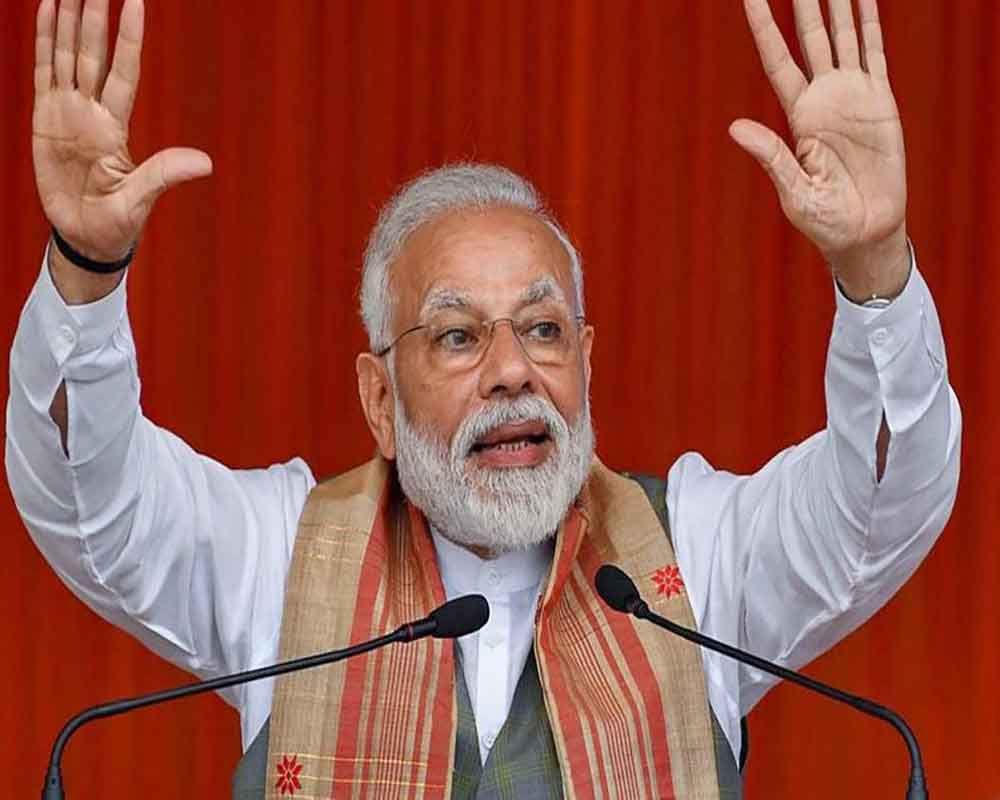 Prime Minister Narendra Modi Tuesday appeared treading on sensitive ground, as he asked first-time voters to dedicate their vote to those who carried out the air strike in Balakot.

"Can your first vote be dedicated to those who carried out the air strike," Modi said, appealing to first-time voters at a poll rally here in Latur district of Maharashtra.

"I want to tell the first-time voters: can your first vote be dedicated to the veer jawans (valiant soldiers) who carried out the air strike in Pakistan).

"Can your first vote be dedicated to the veer shaheed (brave martyrs) of Pulwama (terror attack)," Modi said.

The PM said the first-time voters should remember that their first vote is something which they will remember for the rest of their lives. "You will always remember to whom did you vote and in which election," Modi said.

"Should not you vote for 'healthcare for all' and the Ayushman Bharat scheme," Modi said.

Stepping up his attack on the Congress, Modi said had its leaders acted wisely, Pakistan would not have been created.

Pakistan would not have been born in 1947 had Congress leaders acted wisely in the pre-Independence era, Modi said. The Congress party's manifesto speaks the same language as that of Pakistan, he added.

Referring to National Conference leader Omar Abdullah's remark, Modi accused the Congress and its ally NCP of standing with those who want a separate prime minister for Jammu and Kashmir.

Hitting out at NCP chief Sharad Pawar, Modi wondered if it behoved the Maratha strongman to join forces with the parties holding such a view.

Under the BJP's watch it is the policy of 'New India' that it will kill terrorists by barging into their dens, he said.

Modi said the opposition parties were questioning the valour of the security forces after the Pulwama terror attack and the air strike in Balakot.

Attacking the Congress, the prime minister alleged that corruption was the only activity which the party does "with honesty" after coming to power.

"You must have seen how boxes full of currency notes are being recovered from the houses of Congress courtiers. Buying votes shows their political culture. They are saying for the last six months that the watchman is a thief but from where have the notes come out and who is the real thief?," Modi said.

Modi's remarks came after the recent income tax raids at several locations, including in Delhi and Madhya Pradesh, against close aides of Madhya Pradesh Chief Minister Kamal Nath and others on charges of tax evasion and hawala transactions.

"Those who talk such things, can you trust these people? Can these people safeguard the country," Modi said.

Modi hailed the BJP manifesto, released in Delhi Monday, and said the party is committed to national security and farmers' welfare.

"Your trust is my biggest accomplishment in the last five years," Modi told the crowd.

He also said his objective is to rid India of naxal and Maoist menace.

Modi referred to Thackeray as his "younger brother" and eulogised Shiv Sena founder late Bal Thackeray, whom he lauded for not occupying the chief minister's post and not installing Uddhav, his son, either in that chair.

Parties like the Congress who encourage dynastic rule should learn from Balasahab (on this aspect), he said.

Addressing the poll rally with Modi, their first since the Shiv Sena and BJP announced their tie-up for the Lok Sabha polls, Uddhav Thackeray asked the PM to deal Pakistan such a blow that nothing remains of it to mess with India.

He also welcomed the BJP's manifesto.

Modi reached the rally stage at this town in Latur district of Maharashtra holding hands with Thackeray. Both the leaders were later garlanded together with a large garland.