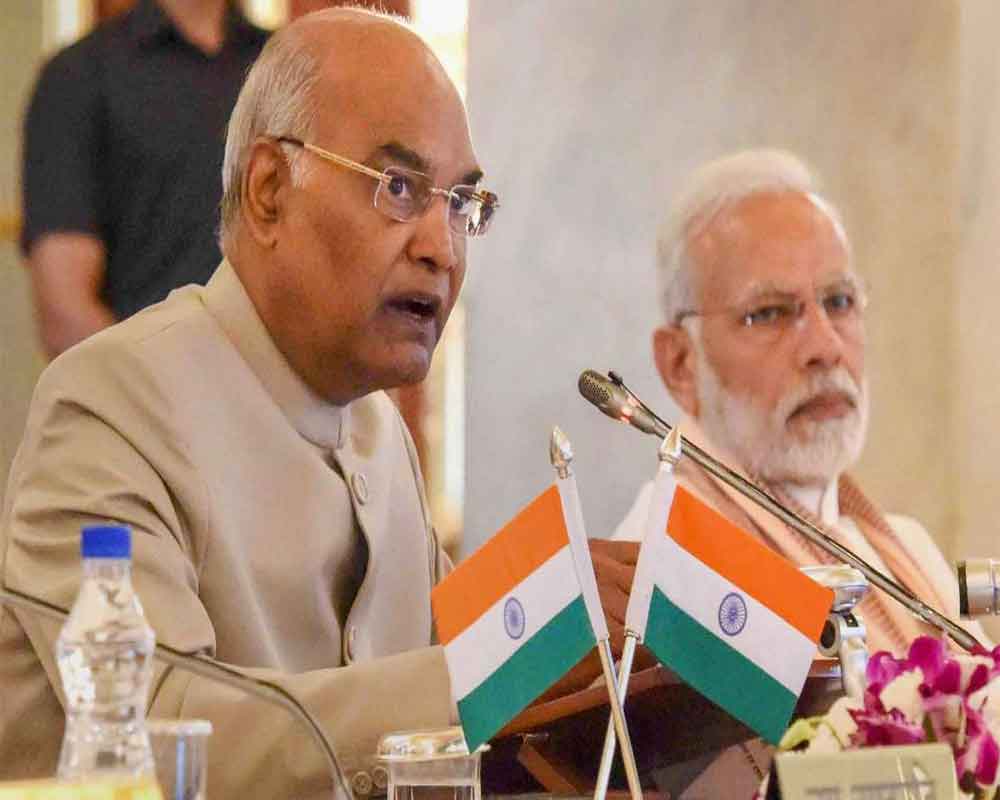 The decisive mandate to Prime Minister Narendra Modi is a call of the people for a new India where there is progress for all and the country transforms itself as an engine of global growth, President Ram Nath Kovind said.

He was addressing a banquet in honour of the heads and representatives of foreign governments attending the swearing-in-ceremony at Rashtrapati Bhavan on Thursday.

Kovind said the verdict is an affirmation of Modi's visionary leadership to build a New India, not in a distant future, but here and now.

"This mandate is a call from our people for an India where there is progress for all and no one is left behind; an India that is on course to eliminating extreme poverty in the coming decade, and to realising the potential in every girl-child; an India that is at work to harness new-age technology and the limitless energy of its youth," he said.

It is call for an India that wishes to connect deeper with its rich cultural past even as it draws the contours of its promising future, and an India that is fast transforming itself as an engine of global growth and a centre of global power-relations, the president said.

"They constantly yearn for a better life for themselves and their children. There is no let-up in their demand for good governance, equal opportunities and efficient and equitable delivery of public goods and services," the president said.

Modi leads a government that will continue to work selflessly and tirelessly to fulfill these aspirations and enable a life of dignity and respect to our citizens, he said.

Kovind said India's dreams are not for it alone.

"As we work for our progress, we remain deeply conscious of the support we draw from our close friends and our close neighbours. From the warm waters of the Indian Ocean to the earnest embrace of the Bay of Bengal and further to the shared cultural affinities and economic opportunities of Central Asia, our people embody similar hopes and aspirations," he said.

Over the centuries, India has been the centre-piece of a great trading system that has run from the heartland of Central Asia right to the Indian Ocean, the president said.             "This is our legacy, and this is also our future. For all our people and for the global community, we must work together to foster peace and prosperity in our region and beyond. Our countries remain stakeholders in each other's progress and wellbeing," Kovind said.

The highest ever number of 8,000 guests, including VVIPs, attended the swearing-in ceremony of the prime minister and his Council of Ministers Thursday.

Dal Raisina, a speciality of Rashtrapati Bhavan's kitchen, is cooked for about 48 hours and its main ingredients are brought from Lucknow. The preparation to cook Dal Raisina had started on Tuesday.