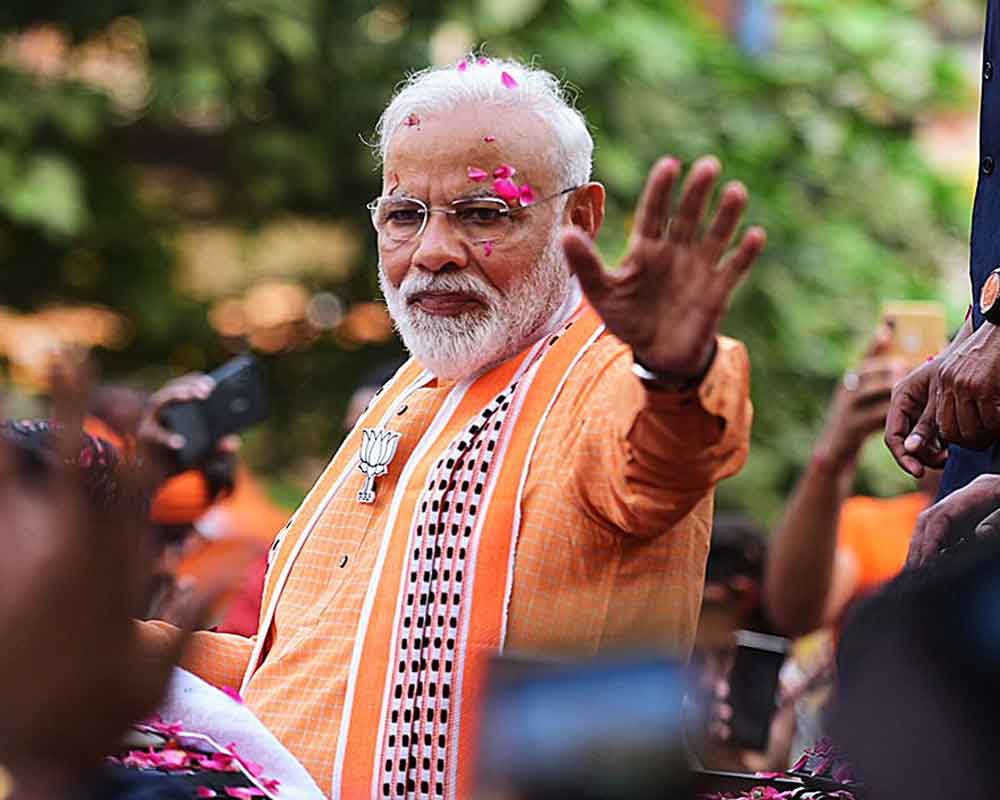 Prime Minister Narendra Modi Saturday said his government's Budget for 2019-20 lays down a roadmap for nearly doubling the size of the Indian economy to USD 5 trillion in five years by raising per capita income, boosting consumption and increasing productivity.

Speaking at the launch of his party's membership drive here, he warned the countrymen to be wary of "professional pessimists" who out of habit will criticize rather than provide solutions for achieving a target.

"Size of the cake matters. The larger the cake, larger pieces are what people will get. So we have set a target of making India a USD 5 trillion economy. Larger the size of the economy will be, the larger the prosperity will it bring for the country," he said.

Citing international examples, he said countries have leapfrogged from developing  to developed status on the back of a jump in per capita income.

"India can also do that. The target is not difficult," he said. "When per capita income rises, there is a corresponding increase in purchasing power which triggers a rise in demand. To cater to this rise in demand, productivity increases and there is an expansion in services. All this creates new opportunities for employment. Per capita income rise also leads to an increase in savings."

Modi said some people even question the need to become a USD 5 trillion economy. "They are what I call a professional pessimists. They are detached from the common man and if you go to them for a solution, they will put you in crisis."

While there should be debate and criticism on ways and means, questioning the target of building a USD 5 trillion economy is wrong, he said. "The country needs to be vigilant of these pessimists."

The Prime Minister said the Union Budget presented on Friday did not make big announcements about the allocations made under different heads but laid down a path for the economy to achieve the USD 5 trillion target.

It provides for boosting farm and fisheries exports, making Rs 100 lakh crore investment in infrastructure such as roads and ports in next five years, constructing houses for all, promoting domestic manufacturing and cutting imports, he said.

While the country is self-sufficient in food grain production, the Budget lays emphasis on turning farmers into exporters of farm produce and value-added products. For this, investment in food processing has been stepped up, he said, adding shipments of vegetables and fruits from this town have increased after setting up of facilities for perishable commodities

"We are going to frame an export policy for farm products," he said.

Also, farm productivity can be increased by using drip irrigation and generating electricity from solar panels, with the surplus being sold to the grid to generate additional income for farmers.

The focus would also be on raising export of fisheries, Modi said.

The government's effort on cleanliness will boost tourism, which is the cheapest form of creating employment, he added.

"The economy will not pick up pace unless infrastructure is good. We are building infrastructure from crop storages in villages to modern facilities in cities. Highway, railway, airways, waterways, i-ways, digital infrastructure, broadband in villages... Rs 100 lakh crore will be invested in five years," he said.

To boost housing, the Budget has given an additional Rs 1.5 lakh income tax exemption on the purchase of affordable houses. Also, the government will build two crore houses to meet the target of housing for all by 2022, he said, adding that the Centre will draft a model tenancy law and send it to state governments to boost rental housing.

All these, he said, will boost employment, create demand for steel, cement and other goods.

While the Budget has given incentives to the brick-and-mortar industries, it has also cleared tax ambiguities around startups. Besides, there is an emphasis on small and medium enterprises, the Prime Minister said.

The Budget contains proposals to boost the manufacturing of solar panels and batteries and also provides tax exemption to electric vehicle manufacturers, he said. These would help bring down oil imports and save precious foreign exchange, Modi emphasised.

"India spends Rs 5-6 lakh crore every year on oil imports, on petrol and diesel," he said. "So if it is reduced, it will be a big relief to the country."

Reduction in imports will strengthen the economy and would lead to savings. The emphasis would be to meet the country's energy needs from resources within such as coal, solar energy, wind power and hydroelectricity. Generating electricity from waste and biofuels from crop residue is also a priority, he said.

Modi said the country has become self-reliant in food grain and pulses production and next it should look at bringing down the import of edible oil. "If farmers dedicate a tenth of their land for cultivation of oilseeds, we can cut the import dependence," he said.

The Budget also provides for social stock exchange for social organisations to raise funds, he added.