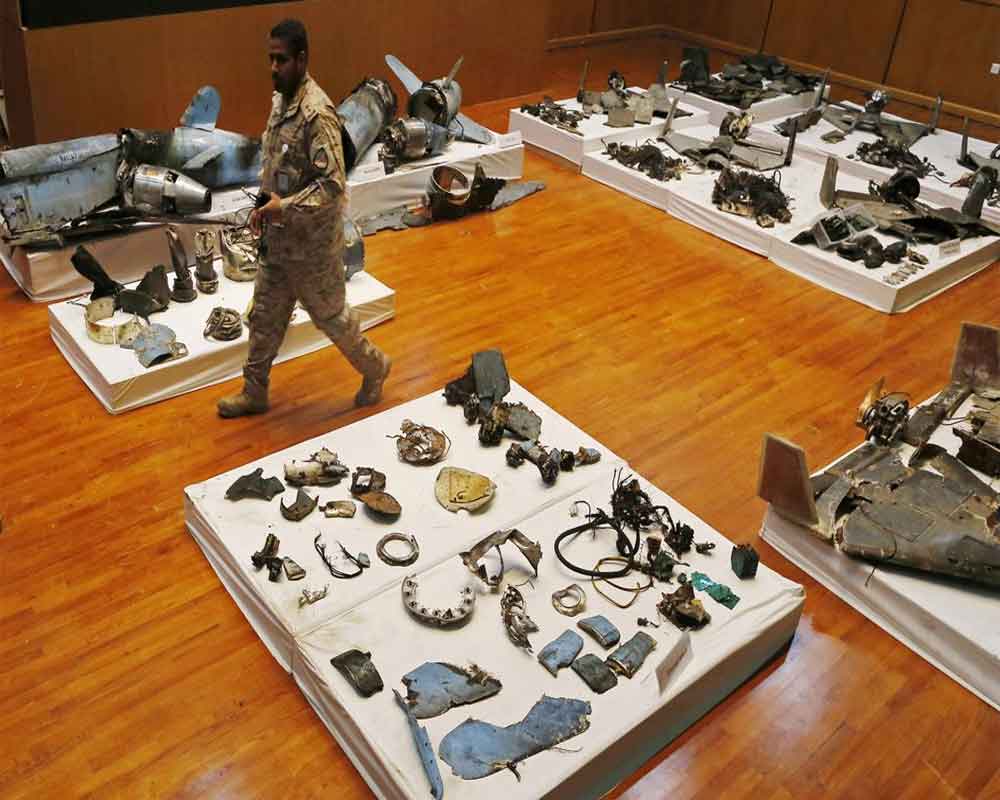 US Secretary of State Mike Pompeo has called the attack on Saudi Arabia's oil installations an "act of war" against the kingdom by Iran, as the Saudis displayed missile and drone wreckage and cited other evidence they said shows the raid was "unquestionably sponsored by Iran."

Iran, which has denied involvement in the attack, warned the US it will retaliate immediately if it is targeted.

President Donald Trump, meanwhile, said he is moving to increase financial sanctions on Tehran over the attack.

At a news conference, Saudi military spokesman Col. Turki al-Malki said the attack Saturday that did heavy damage to the heart of the Saudi oil industry was "launched from the north and was unquestionably sponsored by Iran."

Yemen lies to the south of Saudi Arabia, Iran and Iraq to the north. Al-Malki stopped short of accusing Iran of actually firing the weapons itself or launching them from Iranian territory.

Yemen's Iranian-backed Houthi rebels have claimed responsibility for the attack, saying it was in response to the yearslong Saudi-led war in Yemen that has killed tens of thousands of people.

At the news conference, the Saudis displayed broken and burned drones and pieces of a cruise missile that Al-Malki identified as Iranian weapons collected after the attack. He also played surveillance video that he said showed a drone coming in from the north.

Eighteen drones and seven cruise missiles were launched in the assault, Al-Malki said, with three missiles failing to make their targets. He said the cruise missiles had a range of 700 kilometers (435 miles), meaning they could not have been fired from inside Yemen.

"This is the kind of weapon the Iranian regime and the Iranian IRGC are using against the civilian object and facilities infrastructure," Al-Malki said, using an acronym for Iran's Revolutionary Guard.

He added: "This attack did not originate from Yemen, despite Iran's best effort to make it appear so."

Pompeo, who landed in Saudi Arabia shortly after the news conference, took a harder line, telling reporters: "The Saudis were the nation that was attacked. It was on their soil. It was an act of war against them directly."

He said en route to Saudi Arabia that "it doesn't matter" whether the Houthis claim they were behind the attack. "This was an Iranian attack," he said on Wednesday.

"It doesn't change the fingerprints of the ayatollah as having put at risk the global energy supply," Pompeo said, referring to Iran's Supreme Leader Ayatollah Ali Khomenei.

The attack came after a summer of heightened tensions between Iran and the US over Trump's withdrawal from the 2015 Iranian nuclear deal.

Iran sent a note to the US via Swiss diplomats in Tehran on Monday, reiterating that Tehran denies involvement in the aerial attack, the country's state-run IRNA news agency reported. The Swiss have looked after American interests in Tehran for decades.

"If any action takes place against Iran, the action will be faced by Iran's answer immediately," IRNA quoted the note as saying. It added that Iran's response wouldn't be limited to the source of the threat, suggesting it would inflict damage beyond what it had suffered.

The US State Department had no comment on the Iranian warning.

Trump separately tweeted Wednesday: "I have just instructed the Secretary of the Treasury to substantially increase Sanctions on the country of Iran!" He did not elaborate, and it was not immediately clear what further means are available since he has already cut deeply into Iran's oil market. National Security Council officials declined to comment.

IRNA separately reported that Iran's delegation to the annual UN General Assembly meeting had not left Iran because the US has yet to issue the necessary visas.

Foreign Minister Mohammad Javad Zarif was to travel to New York on Friday, with Iranian President Hassan Rouhani following on Monday. The UN meeting had been considered as an opportunity for direct talks between Rouhani and Trump.

Asked in Los Angeles whether Rouhani will come to New York, Trump said, "I really don't know. If it was up to me, I'd let them come." "I've always felt the United Nations is very important," he added. "I think it's got tremendous potential.

I don't think it's ever lived up to the potential it has. But I would certainly not want to keep people out if they want to come." As the host of the UN's headquarters, the US is required to offer world leaders and diplomats visas to attend meetings there. But as tensions have risen, the US has put increasing restrictions on Iranians like Zarif.

In Tehran, Rouhani told his Cabinet that Saudi Arabia should see the weekend attack as a warning to end its war in Yemen, where it has fought the Houthi rebels since 2015 and sought to restore the internationally recognised government.

Rouhani said Yemenis "did not hit hospitals, they did not hit schools or the Sanaa bazaar," referring to the Saudi-led coalition's airstrikes.

He said the Houthis were responsible for the attack on the oil installations: "They attacked an industrial center to warn you. Learn the lesson from the warning."