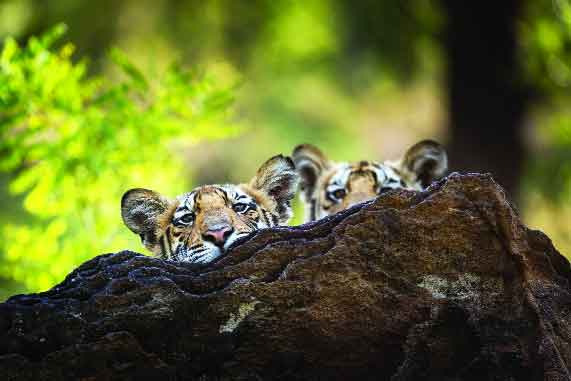 Production consultant of Dynasties, Dhruv Singh, says that tiger is one such animal that can freeze for unimaginable lengths of time. By Team Viva

Production consultant Dhruv Singh was involved in the epic wildlife series — Dynasties. He was vital in liaising with the Forest Department and local community in Bandhavgarh to make the filming happen. He also spent several days on the field filming with the production crew, given his expertise and awareness of the local scenario and challenges.

Tell us about your journey. How did you get into this profession and how many wildlife shows have you been a part of?

Since my childhood days, I have been interested in wildlife, all thanks to my parents, who pioneered the wildlife and ran one of the first wildlife lodges of the country in Bandhavgarh, Bhopal in 1978. I was brought up in Bandhavgarh and had been exposed to tigers since childhood. Initially, in this profession I was a wildlife photographer. I can still recall the day I got an opportunity to work on a wildlife documentary and since then I never looked back. So, I have been working on such documentaries since the year 1996. My first film was the Lands of the Tigers (1997), which was a groundbreaking film of BBC on the Indian sub-continent and it was one of my most enjoyable experiences in life. That’s how my passion for tigers and wildlife grew and turned into a profession.

What is that one trait of a tiger that is distinct from other animals?

The trait that appeals me the most is the patience, especially when they are about to hunt. And because I have spent all my life  with tigers, I have observed them. A tiger can absolutely freeze for unimaginable lengths of time. There will be absolutely no movement. One can never sense that the animal is around them. So when a tiger is inquisitive, it would just freeze in any position. And you can see that in some of the parts of Dynasties.

How difficult was it to shoot in Bandhavgarh Reserve for the show?

It was a struggle that we knew we were getting into. I would like to advice people, who want to make a film or a documentary on the animal — do carry a few pills for blood pressure because it’s a real challenge. Actually, filming wildlife itself is a challenge as it’s among one of  a few professions or maybe the only type of genre, where the subject you’re going to film is completely uncertain. There is no surety whether you’re going to see a tiger or not. There could be days when you wouldn’t see a tiger at all. There was a part of the shoot, where out of three weeks, for two weeks we didn’t find a single Raj Bhera, the tigress. It was a very stressful moment for the entire crew. However, shooting in Bandhavgarh, we had the best possibility of seeing them because it has the highest numbers. We knew the territories, which part of the park to find them. So we had the best knowledge and that made Bandhavgarh the perfect location to film the show.

What is the current situation of tigers in India? Is it better than before? If yes, then how and what more can be done to help conserve the tiger?

I would answer that in two ways. The number of tigers is undoubtedly far better than before but even that is worse. Where will they go and how can we create a space for them is a challenge. And to answer that further, the government of Madhya Pradesh has taken bold steps. Because of their conservation efforts, the numbers have increased. And this is a problem that they have foreseen that when the numbers will grow, where would the tigers go. They have made efforts by making headway into programmes by which they can keep them evenly. They can move them from parts which are big in numbers to areas that have smaller number of tigers. It was very successfully in Panna, where the numbers had drastically dropped. They were able to repopulate by bringing them from other tiger reserves.

Does filming in proximity in the jungles disturb the animals?

The reason why I agreed to work with Sony BBC Earth for Dynasties was that they deeply respect the space for animals. And It was very clear that this film about tigers in their habitat, living a natural life. And that is what was exciting as well as a challenge. In order to make a successful film, we need to have a safe distance. The tiger must not feel your presence, which is a hard thing. So it was all possible because of the lenses we used. The ethics of the channel are very clear. The entire team behaved in a certain manner in which they should. To shoot the tigers, there should not be any disturbance, and the team adhered to it. Because the minute a tiger is disturbed, the shot is of no use to us.

What are the ground realities in the jungles that contribute to extinction of animal species including tigers? What can a common man do to help in tiger conservation?

I feel that people of the country are very responsible as they understand what does it mean to be cruel towards animals. That is why most of the species animals have survived in India. Even though India being the most populated country in the world, there is still room for animals. And that is not only because of education or conservation efforts, it is because people care for animals and that for me is the essence of conservation. It is our duty, me as a filmmaker and every other individual as common person to understand their manner of living. Giving them freedom is what matters the most as everybody likes to live in their natural habitat and live a life as they want. If we let them live on their own terms, this simple means that we care enough to protect them. In a nutshell, the biggest responsibility to have is to fidget nature, national parks, reserves and spend time with animals.

What drove you to the world of wildlife? Tell us your scariest moment while assisting in filming the tiger?

A lot of people find get scared when something happens. However, while filming wildlife, it’s scariest part is when nothing is happens. It means that it is scary when you can’t find anything to shoot. When a tiger sleeps, it sleeps through out the day. The longest we have gone without seeing a tiger is two and a half weeks, almost 18-20 days. It was so dreadful. It’s really difficult because the entire crew’s patience is tested to extreme levels. And that’s where the production plays a big role in keeping the morale of the team high and keeping them excited.