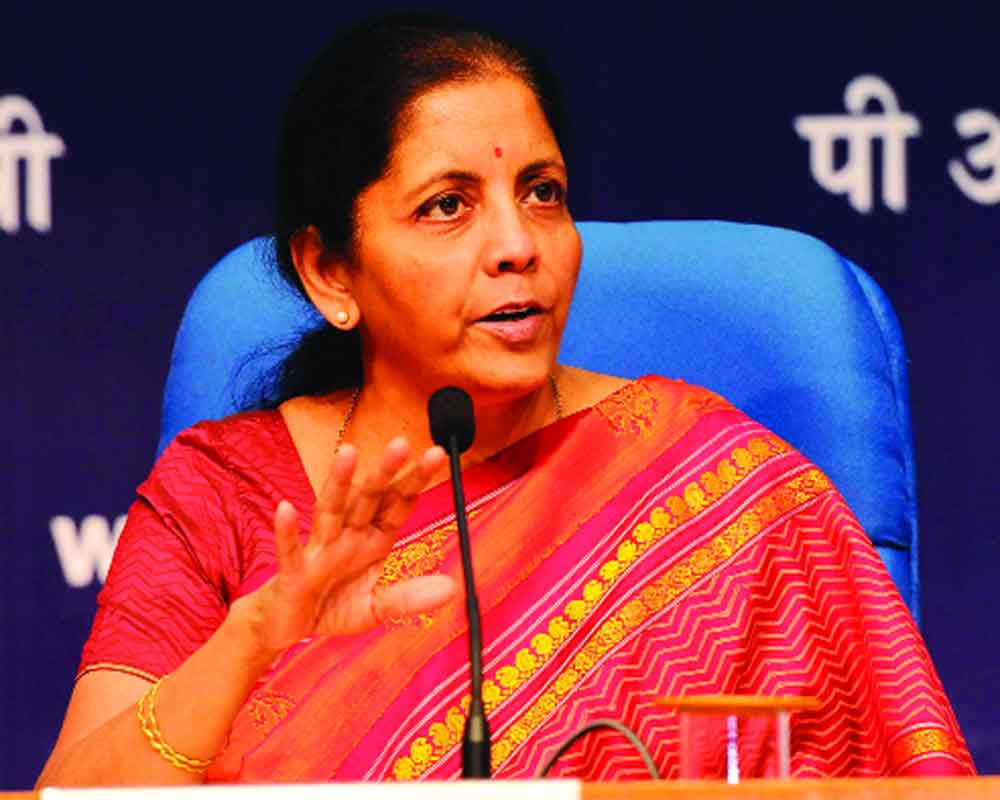 Finance Minister Nirmala Sitharaman on Saturday said the Central government is plugging the loopholes in the Good and Services Tax (GST) with the use of technology and is working towards eight per cent growth rate.

She also said micro, small and medium enterprises (MSMEs) can make a complaint if banks deny them loans without reason.

Sitharaman was here to explain the Budget proposals to traders, industrialists, economists and the media.

According to her, during the last three months the GST collections have exceeded `1 lakh crore.

She said at the GST Council, State Finance Ministers had said that owing to loopholes tax revenue is not increasing and now that is being plugged.

According to Pandey, the Government is taking various measures like use of data analytics, data from Income Tax filings, exports and imports and identify where taxes are not being paid.

Pandey said if the tax paid and the tax due difference is large than the taxpayers and also tax officials are notified.

“This has resulted in higher tax collections,” he said.

According to him, the government will continue to use targeted approach and also use data analytics and artificial intelligence.

When asked about the pending GST dues of `4,000 crore to Tamil Nadu, Sitharaman said it would be setting in two months and the due is not targeted at the state alone.

On bringing petrol and diesel under GST regime she said the GST Council consisting of state Finance Ministers have to decide on that and once they agree then it would be done.

Pandey also said once the Finance Bill is passed by Parliament the government will put out the procedure to be followed under ‘Viwad Se Vishwas’ scheme for settling pending direct tax issues.

He also said where the tax department of the government has filed an appeal against the taxpayer then that would be withdrawn.

Queried about the new tax slab rates that would turn India from a saving economy to spending economy, Sitharaman said that an earning individual with additional money on his hands can decide what to do with it and the government need not guide his savings through tax deductions.

According to her, it is just eight days since the Budget for 2020-21 was presented. It will take some time to see whether demand boosting measures stated in the Budget would give results.

Earlier addressing the traders and industrialists, Sitharaman said micro, small and medium enterprises (MSMEs) can complain if banks deny them loans without reason.

Sitharaman said if the banks are denying loans without reason then the MSMEs can send a complaint to the special centre to be announced shortly.

She said a copy of the complaint should also be sent to the concerned bank manager. Sitharaman said the foreign exchange reserves are at a high level as the fundamentals are good. On her long Budget speech, Sitharaman said that officials had worked hard to come out with proposals for all sections of society.

Stressing that the macro economic fundamentals are good Sitharaman said the focus is on creating assets and investing in infrastructure.

“It took four years for us to set right the NPAs,” she said.

Sitharaman said lessons have been learnt on how to prevent such a situation again.

She said public expenditure should go for infrastructure.