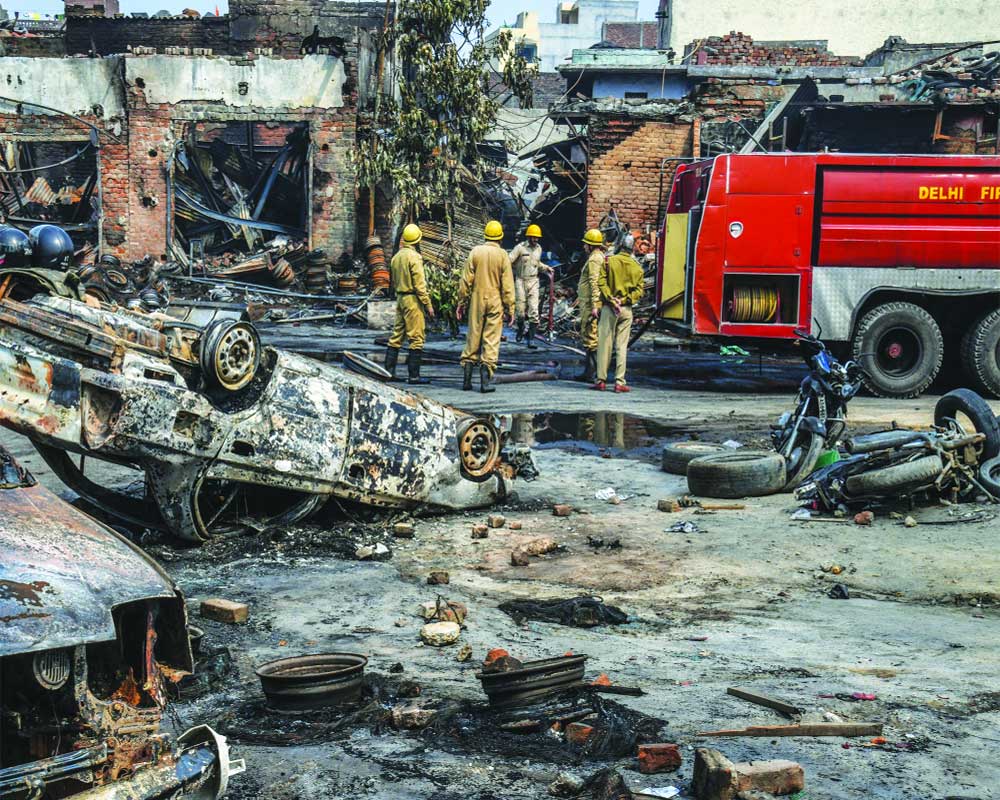 The impact of the riots is not restricted to lost lives and economic opportunities. Its reverberations have also been felt in the way in which the global community has responded

History tells us that the myth of Roman emperor Nero fiddling while Rome was burning was just that, a myth. For one, the fire that burned Rome to the ground occurred in 64 AD and the violin was invented in the 12th century, more than a thousand years after Nero’s reign. So, whatever Nero may have played, if he really did play something, it certainly wasn’t the fiddle. There is, however, no such doubt about what Prime Minister Narendra Modi was doing while Delhi burnt recently. His obsequious fawning over US President Donald Trump and his family was there for all to see on prime television and along with Delhi’s reputation as a progressive Capital, Narendra Modi’s own standing as a statesman on the global stage turned to mud and ashes.

Funnily enough, his fall from grace was best reflected on American late night talk shows, such as John Oliver’s Last Week Tonight, where Modi became a butt of low humour. Moreover expressing anger over the issue at this late stage, as some papers suggest he has done, only adds to his credibility problem, as trust is no longer a tradable commodity available to him.

However, the seriousness of this tragedy can best be understood once we look at the issue in its larger perspective. Forty-seven dead and counting is the official death toll with over 250  injured. And, as in most such cases, the likelihood of gross underestimation cannot be ruled out. Even using official figures, the seriousness of the incident can be gauged from the fact that while over the last 70 years 90-odd souls have perished in all the previous Hindu-Muslim conflagrations in Delhi, more than half that number perished in just the 72 hours of rioting that we recently witnessed. Crucial 72 hours, in which the Delhi Police added to its glorious tradition of utter ineptness, shame and unprofessionalism as men in uniform waited for the murderous rage of the unhinged to spend itself. If allegations are to be believed, some of them even joined in the mayhem. Certainly, they are undeserving of the uniform they don, especially of the former Police Commissioner, whose inaction just days prior to his retirement showed him up as wholly unworthy of respect or that rank. Sadly, 40 years of a wasted legacy to leave behind.

As is often the case, violence, especially mob violence, tends to be motivated by fear of the unknown and a dread of the other. True to form, here, too, fear has been the key that has been used to divide communities, consolidate hate and finally to destroy lives and livelihoods.

Among politicians and even civil society, there are no innocents here. Many among the Opposition parties, supported by the anti-BJP  set, went about stoking terror among minorities, suggesting that the Citizen Amendment Act (CAA) was just the first step towards their exclusion from citizenship, without a shred of evidence to support their accusations. They are as much to blame for the targeting of the Muslim community as those non-entities from the BJP, who encouraged goons to resort to violence and whose only claim to fame is being second generation politicians. Thus, their only hope of impressing Modi was through a display of zealous fealty. Of course, for some of them, revenge was certainly a motive after the drubbing the BJP got in the Delhi Assembly Elections, despite the saffron party’s best efforts.

It was patently obvious to most, except the politically-illiterate, that the CAA was an ill-conceived attempt by the BJP to win brownie points in Assam, after it had committed hara-kiri in the manner that it went about organising the National Register of Citizens exercise there. The fact that the Home Minister continues to vociferously support the CAA suggests that the obvious fact that the issue in Assam is not about religious identity but ethnicity, has been beyond his comprehension.

It is only a matter of time before their wishful thinking that CAA will help them in the Bengal elections turns out to be a mirage, despite the pathetic performance of the Trinamool Congress till date. As that old proverb goes, “for want of a nail a kingdom was lost.”

Just as following the money trail helps catch fraudsters, the body count clearly points to those who were responsible for this conflagration. It is bound to haunt them for times to come, despite all denials. What it does also reveal is that the leadership that permitted such violence was utterly bereft of common sense. To initiate such attacks when President Trump was visiting, with the Western media being focussed on the country, shows a spectacular lack of foresight with regard to timing. More so, when the economy that is in the doldrums stares at a unique opportunity to turn things around because of Chinese manufacturing having been stymied by the effects of COVID19. But now the nation finds itself held hostage by the very violence that was permitted to be unleashed. Unfortunately, the impact of these riots is not restricted to lost economic opportunities only, as its reverberations have also been felt in the manner in which the international community has responded with outrage, especially our friends in West Asia.

Given the fact that over the last few years Modi had expended a fair amount of energy on improving and expanding ties with both Saudi Arabia and its allies, as well as with Iran and its friends, the violence has meant taking two steps backwards.

This attention to the region paid handsome dividends when Modi decided to act in Jammu and Kashmir to abrogate Article 370, in all but name. While Pakistan attempted to exert pressure in the international fora on the issue with the help of Malaysia and Turkey, its actions were largely unsuccessful because of the position taken by both Saudi Arabia and Iran.

However, the ongoing detentions in Jammu and Kashmir and the anti-CAA protests across the country finally forced Saudi Arabia to accede to calling a meeting of Foreign Ministers of the Organisation of Islamic Cooperation (OIC) in April 2019, to discuss Kashmir and the CAA, much to the Modi Government’s discomfiture.

We really need not hold our breath over how the Saudis will react to these riots. In any case, we now have the Iranian Foreign Minister, Javad Zarif, an extremely good friend of India, out rightly denouncing the violence by tweeting, “Iran condemns the wave of organised violence against Indian Muslims. For centuries, Iran has been a friend of India. We urge Indian authorities to ensure the well-being of all Indians and not let senseless thuggery prevail. The path forward lies in peaceful dialogue and rule of law.”

Strong words indeed and while the Government summoned the Iranian Ambassador Ali Chegeni and protested his Foreign Minister’s condemnation of the incident maintaining that it was an “internal matter”, the truth is that the Government finds itself on the back foot with the Foreign Minister becoming a laughing stock as he attempts to defend the indefensible.

Finally, leave alone our interests in West Asia, we seem to have made a mess of things closer home as the Bangladesh Government attempts to come to terms with the fallout of our intemperate actions. All that we now need is a Democrat in the White House and Modi’s cup of joy will overflow.

(The writer is a military veteran and consultant with the Observer Research Foundation and a Senior Visiting Fellow with The Peninsula Foundation, Chennai)