Decoding the future of jobs

Decoding the future of jobs 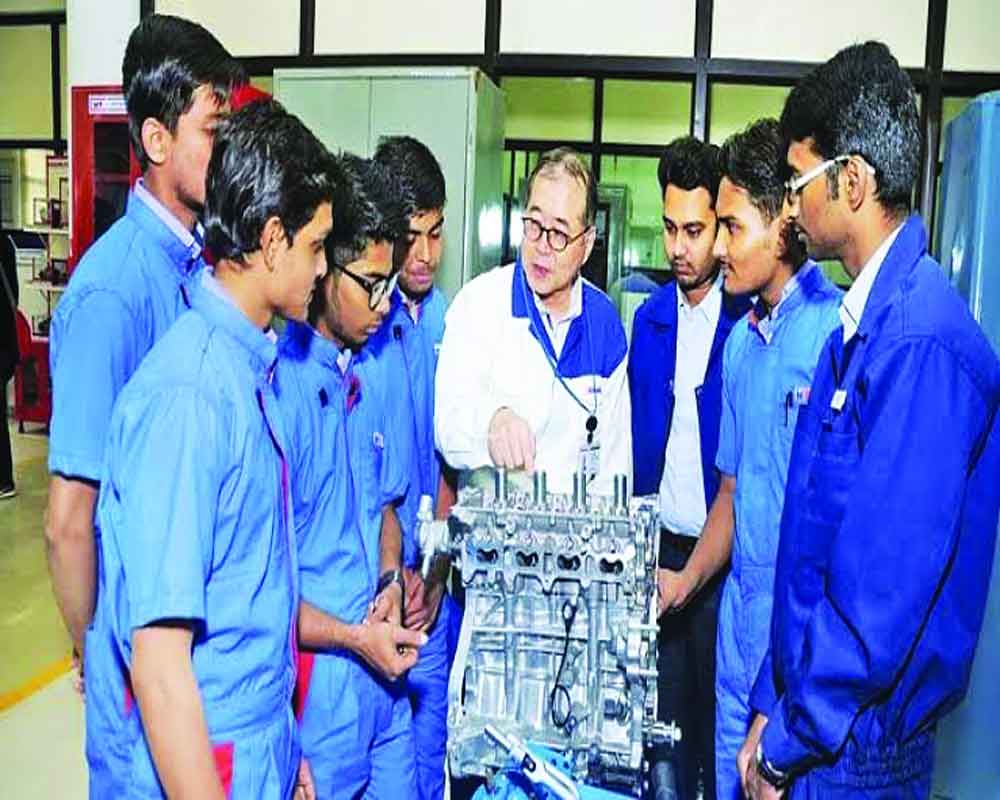 India is facing a unique challenge owing to new job opportunities, reduced employability due to archaic education, changes in the workplace and poor learning capabilities caused by malnutrition

Goal 8 of the UN Sustainable Development Goals looks at decent work and economic growth. One offshoot of this should be an improvement and sustained growth in the country’s state of jobs. But India is facing a unique challenge on this front, owing to a combination of evolving job opportunities across sectors, reduced employability due to the gaps between the education system and the dynamic changes in today’s workplace and deficient learning capabilities due to legacy nutrition challenges. Even though the NSSO data estimating India’s six per cent unemployment rate at a 45-year high was contested due to its narrow sample-size, the labour force participation rate and work participation rate (those in working-age looking for work and finding it, respectively) declined between 2012 and 2018, as per a paper by the Azim Premji University. The Grameen Foundation India’s (GFI’s) State of the Jobs in India report underscored the urgency to create jobs for over 15 million youth who are expected to enter the workforce each year. The question is which avenues can create net new jobs?

A more enduring challenge is the fact that our educated workforce often lacks the requisite employability skills to meet the emerging demands of today’s jobs, be it on knowledge, competencies, technologies, processes, critical thinking and analytical abilities. Our archaic education pedagogy is not making our youth employable. This is causing a mismatch between aspirations and abilities, between income and consumption and a delay in realising India’s demographic dividend. The need to push the right skill set and education to meet the evolving nature of jobs is perhaps even more imminent.

The investment in human capital for most of our population has been low from infancy which has caused legacy nutrition issues like stunting and undernutrition. Research suggests stunting and undernutrition impacts the brain’s development and thus abilities to learn new knowledge and skills which renders us unemployable. No quick-fix skill training can address this vexed issue.

The GFI recently brought together corporates, policymakers, researchers, think-tanks, innovators, skill-developers, financiers, NGOs and the youth to deliberate on the current situation, identify trends and opportunities and seek the best recourse as the way forward. One priority was to address the issues surrounding the major employers of the workforce, i.e. agriculture and micro, small and medium enterprises (MSMEs). The discourse on these sectors often gets shadowed by the buzz surrounding start-ups and technology as the new engines of job growth; however, these two remain the mass employers.

With net income growth from farming moving south — a minuscule growth of 0.44 per cent per annum between 2011 and 2016 as per a NITI Aayog paper — coupled with chronic debt due to expensive chemical inputs and natural phenomena like varying rainfall, floods and droughts, it is no surprise that sectoral employment declined by 27 million between 2012 and 2018. This is manifesting in mass migration from rural regions, led by youth. While the Government’s efforts to bridge the knowledge-gaps of new farming methods and technologies with extension and technical training have been in the right direction, there is a need to devise a reverse-migration strategy to bring back the youth to the farms. This can be done by incentivising low-cost, sustainable farming, setting up rural-based industries, facilitating farmer producer organisations (FPOs), ramping up social collateral-based rural credit, introducing technologies to scale up crop productivity, reduce damage, facilitate storage and transport and encourage the agri-entrepreneur ecosystem. That would also help revive the Bharat consumption story, a selling point of India’s growth story that has hit headwinds.

The manufacturing sector, where MSMEs dominate in terms of people employed, saw employment decline by 3.5 million between 2012 and 2018. While this was led by a sluggishness in the construction sector, it is also worth noting that only about 50 million out of the 62-63 million MSMEs are said to be operational and most are struggling to scale up. The challenges include their inability to adopt new technologies, digitalisation and production processes and the failure to reinvent their competitiveness given the new sources of competition and trade-wars. A concerted mix of technology influx, policy support and funding measures is needed to build their long-term competitiveness and create better outcomes through sustained business and job growth. That presupposes their workforce is also made capable on skills to leverage the new technologies.

The debate on sustainability and climate change is turning loud following the increasing awareness of consumers and investors. Stakeholders are concerned how these risks impact businesses, economies, natural and social ecosystems, and that is driving a new category of jobs, i.e. green jobs. Most of these did not exist till some time back, ergo their existing workforce migrated from other roles. That implies a demand for upskilling to fill their knowledge gaps. New graduate courses dedicated to these avenues are also required.

Renewable energy, circular economy, waste recycling, water treatment, sanitation, green transport and so on are the avenues picking up speed. Social enterprises that seek broader social goals and not just shareholder returns, are another. While these are still in their infancy, they could be instrumental in creating much of the new jobs the country needs. Since these sectors still require partnerships between corporates, Governments and communities to establish scalable operating models, these linkages could create job opportunities even with other stakeholders.

The Fourth Industrial Revolution, led by breakthrough technologies, is changing the way we work. That means new types of jobs, replacement of erstwhile jobs and new skills. It is important to understand that technology is becoming a job-enabler across sectors and not just a job by itself. Thus, to grow in any sector or function, the workforce will need to build technology skills. This includes sectors which we rarely associate with technology, like agriculture and textiles. It is also important to understand that upskilling on technology is not only to save oneself from the discomfort of becoming redundant but to make one competent to leverage newer opportunities of business (and job) growth. We not only need more people to devise innovative technologies, we also need thinkers to devise how those innovations can help us redefine our target market, expand customer base and markets. That means building our critical thinking and analytical skills as well.

A growing awareness among working professionals to remain relevant and avoid layoffs is driving the demand for upskilling. Institutionalising upskilling programmes that are quick, low-cost and convenient for all would depend on the employers’ initiatives and the strength of public-private partnerships. A frequent method of upskilling are skill programmes by the employers themselves. This may need partnerships with state authorities to develop content or recognised certifications. The employers’ role enables relevance of the pedagogy. Such programmes could also be revenue-generating if they enrol outsiders. Certification courses could be developed separately by specialised skill providers as well, leaving employers free to focus on their core business.

This upskilling and critical thinking would also boost growth of startups as  many ventures are still in the red despite several years in operations. The era of startups delivering me-too products without a distinct competitive advantage is ending. Critical thinking and innovations would be instrumental in making their business models competitive, generating operating cash flows and turning their books black.

Inclusiveness in the workforce by bringing in more women and specially- abled could help the job market incrementally, while driving economic gains. Almost half of India’s specially-abled are literate and in employable age, a potential workforce India could leverage with market-based vocational training and appropriate roles. Addressing the socio-cultural challenges that women face at homes, on the streets and at the workplace could help reduce the gender gap.

Several sectors hold promise to create new jobs, provided the necessary policies, technologies and funding converge in time. In the near-term, there is a need to drive relevant skilling and education content that must be monitored, measured and backed with appropriate apprenticeships, entrepreneur-incubation or job functions so that the migration from skilling to relevant jobs occurs. That presupposes measures to improve the nutritional status of our households, especially in the rural and peri-urban regions. One has to watch how India addresses all these requirements. Without these investments in human capital development, the going would only get tough.