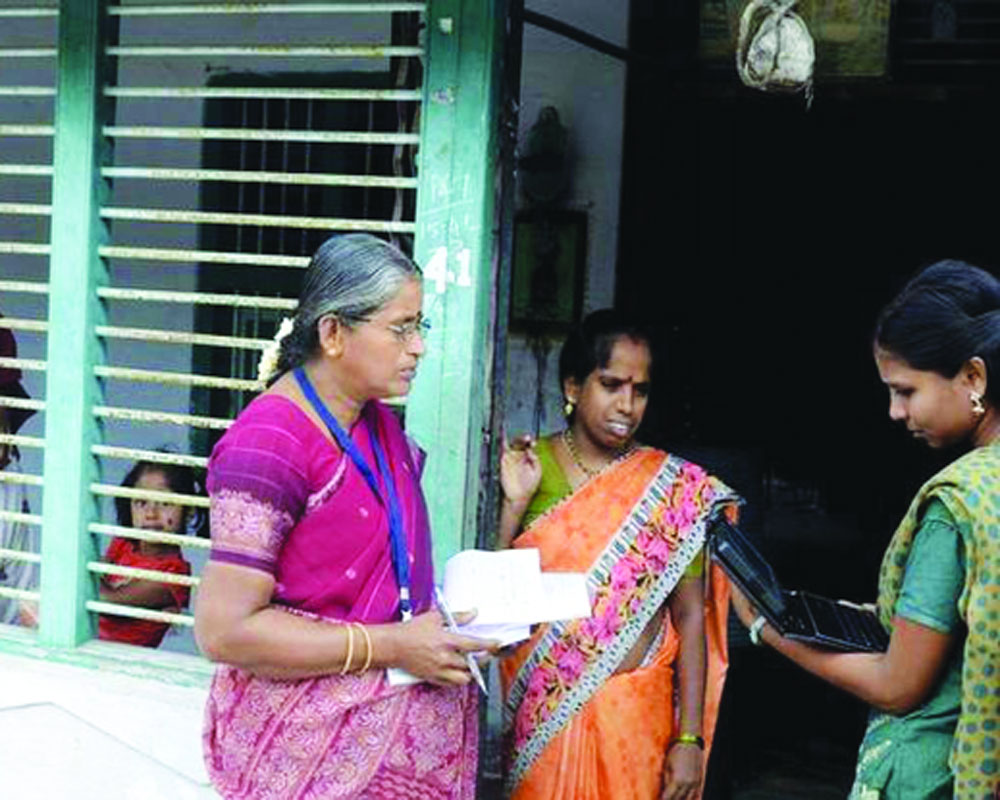 The challenges for data posed by the pandemic, CAA-NPR-NRC and the reluctance of the Government to release official figures need to be tackled urgently

Owing to the lockdown necessitated by the COVID-19 pandemic, the Centre has deferred the National Population Register (NPR) updation exercise and the first phase of Census 2021, both of which were scheduled to start in April. Census operations in India had hitherto been conducted in an unbroken chain since 1881. The only exceptions were in Assam in 1981 due to Statewide protests against illegal immigration from Bangladesh and in Jammu and Kashmir in 1991 due to law and order problems.

India’s census, comprising house listing operations, where all the houses, irrespective of use, are identified and population enumeration, is one of the largest administrative exercises undertaken anywhere in the world. In the present context, given how the virus is spreading its tentacles, it is impractical to send census enumerators to households to collect and validate any information.

The census-NPR debate: Before the pandemic struck, the emphasis on conducting a joint census and NPR updation exercise, riding on the house listing operations, had faced considerable debate and criticism owing to the recently-enacted Citizenship Amendment Act (CAA) intertwined with the Government’s open commitment to the National Register of Citizens (NRC).

Linking of the census and NPR raises technical and operational questions. In 2011, the NPR tagged to the house-listing schedule had serious coverage issues, with about 60 million people missing. The fact that the NPR data is certainly not required for targetting purposes, the question that arises then relates to its utility since it is collected at enormous physical and financial costs when Aadhaar-based biometric identification numbers with higher coverage are already available. Moreover, since the Government has not revealed the existing NPR to public scrutiny, all insistence on its accuracy is merely a conjecture, validating apprehensions over the NPR being the base for the NRC. The census-NPR debate has become intertwined with other controversies over official Government data. This has portrayed the present decade as disastrous for public data in India and warrants an urgent response to uphold the integrity and credibility of our statistical institutions.

The political economy of official data and harnessing ICT: Experiences from recent years suggest that the Government itself shied away from accepting various official statistics on employment, consumption, sanitation, and so on, owing to the inability of the Government, NITI Aayog and other departments to produce credible reports on account of method and comparability, adhering to the consistent macro picture. Apart from concealment and postponement of Government reports, if and when these are released, they are done so with multiple disclaimers.

As a result, the entire process makes the reports virtually unusable. This is further amplified by blatant withholding of administrative data often managed by big private consultants. For several years, not much has been done to fix this lacuna.

To reform the Indian statistical system, the present Government prepared the Draft National Statistical Commission (NSC) Bill, 2019. This Bill is aimed at empowering the NSC to effectively formulate policies, priorities and standards on statistical matters. Further, a Five-year Vision 2019-2024 for the National Statistical System has been published by the Ministry of Statistics and Programme Implementation (MoSPI). The NITI Aayog on its part has proposed a National Data and Analytics Platform (NDAP). These efforts demonstrate a growing acknowledgement of the need for the use of digital technology, which would democratise access to holistic and coherent public Government data on a real-time basis.

A departure from the past census exercise for census 2021 is that these operations will be carried out with handheld devices for prompt scrutiny and transfer of data to secure centralised servers. While this is certainly a progressive move, India must further take a cue from the experience of many countries in their responses to COVID-19 to tackle data-related exigencies concerning citizens registries.

In the US, the ongoing census 2020 (https://2020census.gov/) operations have been made fully online, ensuring accountability and credibility. Importantly, this has made the exercise open, inclusive and incorporative of citizens in these challenging times. No wonder, the census exercise in the US appears more as a celebration on social media, where its citizens are proudly enrolling and actively participating, whereas, in India, the whole exercise displays apprehensions and policy vacuum.

There is no time to lose. The existing initiatives by the Government on harnessing ICT, such as Pro-Active Governance and Timely Implementation (PRAGATI), Digital India and JAM Trinity, need to be leveraged to carry out and continue the historic census exercise of 2021, as well as to restore the credibility of our statistical institutions.

COVID-19, data and the State: There is no denying that the pandemic can only be fought with real-time information and aggregated data collected using cutting-edge technology and with the use of the internet, phones, ICT, location data and so on. This will help in the mandatory surveillance of each citizen in the extended lockdown period to enforce the necessary social distancing, isolation, tracing, delivery of essential services and welfare, the functioning of the economy and society and, more importantly in ensuring health and medical facilities.

This calls for a full-fledged citizen digital literacy programme under Digital India, utilising the lockdown time to handhold each citizen. In other words, the time for ensuring universal digital literacy, learning and application is now or never. During the pandemic, the amount of constructive and willing enrolment and support from each citizen, community, private sector and civil society, which will provide for such universal enumeration and registry by the Government, will be enormous and worth attempting. For now, the fallout of non-withdrawal of the State’s power over data and surveillance remains a valid yet distant worry.

The way forward: The fight against the pandemic has taught us the real importance of data and statistical systems with a robust ecosystem for innovation and accountability. Empowerment of the severely-underfunded and understaffed Indian statistical system requires urgent and large investments in technical and human resources.

Also, a real-time and dynamic database of unemployed, migrant and informal sector workers would immensely help in aiding the most vulnerable and marginalised sections that are excluded from any support from the Government in the absence of their up-to-date registry. This would, in future, help to avoid situations like the current plight of internal migrants trekking along the highways to reach their home villages and small towns, in the face of the transportation and economic lockdown.

The census provides migration data at the district and town level, so holding it every five years instead of the present decadal system should be considered.  Organising an intercensal survey, as done in many countries, can also mitigate this deficiency in the Indian data system to a large extent.

Improving the credibility of official statistics would take a broad consensus and effective leadership. Disentangling the overlapping functions of statistical bodies like the NSC and MoSPI and creating coherence and cohesiveness in their duties and responsibilities is required.

To enable evidence-based policymaking, planning and implementation, adapting ICT at par with global standards is required by the system of official statistics in India. A universal digital India push now can lay the foundation of real-time data and modern architecture. This will go a long way in realising the vision of ‘New India’ and a $5 trillion economy. Further, postponement of NPR and only doing the first phase of the 2021 census work will be a logical step to ensure that the timeline for the population count in March 2021 is not altered. The challenges for data, posed by the pandemic, CAA-NPR-NRC and the reluctance of the Government to release official data, needs to be tackled urgently. Besides this, the NSC should be made an independent and dynamic body led by professionals to ensure availability of credible, accessible and legible statistics to empower policymakers with quality data to make India the world guru.

(Kumar is Director, IMPRI and  Mohanan is former acting Chairperson of the NSC and mentor, IMPRI.)