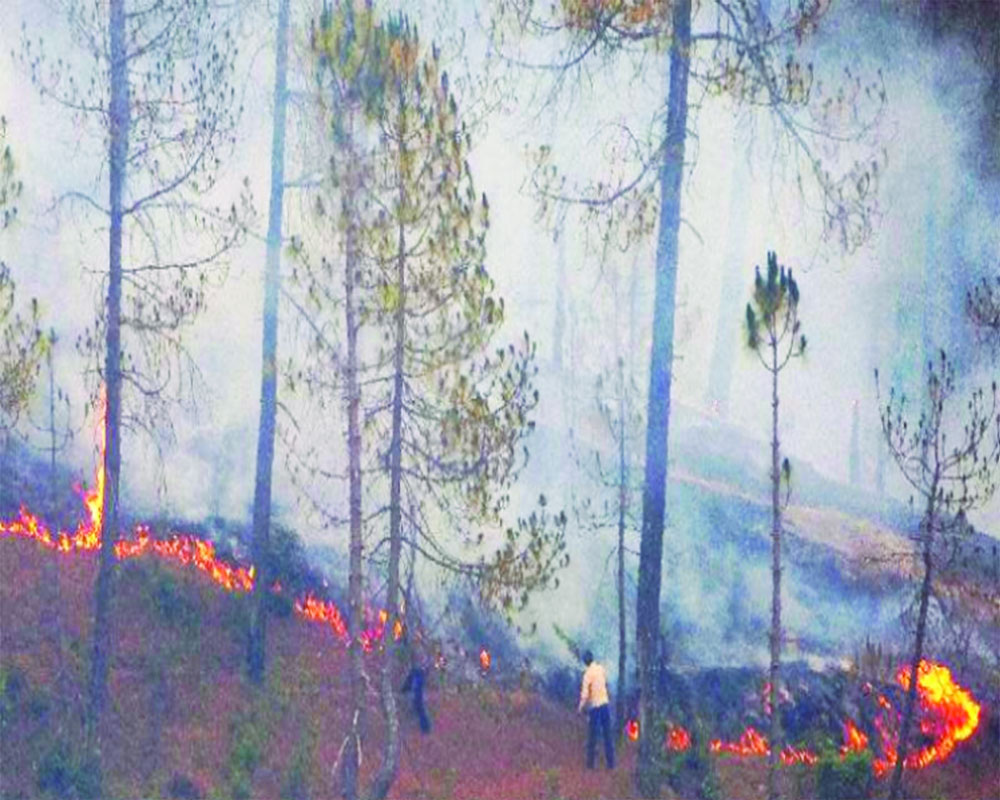 As this piece is being written, forest fires are burning at a number of places in Uttarakhand, and perhaps in a few other parts of India as well. According to a report by Lalmani Verma in The Indian Express of December 6, 2020, Uttarakhand had recorded 185 wildfires between October 1 and December 1 this year. This was more than the number of fires that occurred between mid-February and mid-June, which is the season for forest fires in the State. But then, the number of conflagrations in this year’s fire season was incredibly low. The report quotes Man Singh, Chief Conservator of Forests, Forest Fire & Disaster Management, as saying: “The number of fire incidents in forests from February to June this year was almost 10 per cent of the average number of incidents that occurred in the past 20 years. In October and November, only a negligible number of forest fires had occurred in the past years, but there was a sharp rise in these months this year after the unlockdown process. It leads to the conclusion that such incidents occurred due to carelessness of humans who moved out after the unlocking process.”

This tends to corroborate the belief, held by many, that the sharp fall in the number of fires in this year’s season was a result of the COVID-19 outbreak and the lockdown, and that the numbers will soar at an unprecedentedly high rate as normal activity picks up. This prospect must cause serious concern because of the severe damage that forest fires cause. They destroy entire forest ecosystems, kill wildlife, drive endangered species towards extinction through the destruction of their habitats and burn trees and the undergrowth. Spreading out, they destroy human settlements, houses, property and kill people. Environmentally, they are a major source of greenhouse gas emissions. A report by Daisy Dunne, datelined July 14, 2020, and titled “How climate change is affecting wildfires across the world” in Carbon Brief, states that they are responsible for 5-8% of the 3.3 million annual premature deaths from poor air quality.

At least a billion animals and birds are estimated to have perished in Australia’s devastating forest fires in the late 2019 and early 2020. The actual number may turn out to have reached trillions if the estimates had taken into account bats, frogs and invertebrates like insects, worms and spiders. According to a CNN report by Jessie Yeung titled “Australia’s deadly wildfires are showing no signs of stopping. Here’s what you need to know”, last updated on January 14, 2020, the catastrophic forest fires in Australia destroyed 1,588 houses and damaged 650 others in New South Wales, the country’s most populated State.

In the United States, the State that has suffered most over the years is California. Things were, doubtless, better in 2019 than in 2018. In late October last year, however, forest fires forced 2,00,000 people to leave their homes and led to the declaration of an emergency. The period from January 1 to November 22, 2019, witnessed 46,706 wildfires compared to 52,080 in the corresponding period in 2018. About 4.6 million acres perished in the same period in 2019, compared to 8.5 million acres in 2018. Towns, property and houses have been destroyed and people killed.

The situation is grim in India which, on an average, loses Rs 1,176 crore a year to forest fires. The Forest Survey of India (FSI) detected 29,547 fires in 2019 using the Moderate Resolution Imaging Spectro-radiometer (MODIS) system. In a written response to a query, Minister of State for Environment Babul Supriyo told the Lok Sabha on September 23, 2020, that an area of 2,56,710 hectares was affected by forest fires in the country in 2019. What is also alarming, a report by the FSI submitted in 2019 has it that 1,52,412 out of India’s 7,12, 249 square kilometres of forest cover, 21.40 per cent, is highly fire-prone, with the forests of Mizoram, Chhattisgarh, Manipur, Odisha and Madhya Pradesh being the most vulnerable.

The prospects are forbidding. For one thing, global warming is conducing to an increase in the number of forest fires. Many experts consider it to have been an important factor aggravating the circumstances leading to the Australian and American forest fires referred to above. This is hardly surprising. Global warming makes vegetation highly inflammable through enhanced evaporation, which causes fires to spread rapidly and become more intense. It has also caused the length of fire seasons — when conflagrations are most frequent — worldwide to increase by 19 per cent between 1979 and 2013.

It is a cyclical process, with global warming conducing to forest fires and the latter contributing to global warming. The way things are, the Paris Agreement on Climate Change’s call for holding the increase in global average temperature in this century to well below 2°C above the pre-industrial revolution level and for trying to limit it to 1.5°C above it, is not going to be achieved. More, according to the Special Report on Global Warming of 1.5°C, released by the Intergovernmental Panel on Climate Change (IPCC) on October 7, 2018, the adverse effects of climate change would not be reduced even if the increase is limited to 1.5°C. What is particularly alarming, this level, according to the report, is likely to be reached sometime between 2030 and 2052.

With global warming continuing to aggravate — and make more potent — the circumstances leading to forest fires, the actual spark is sometimes provided by lightning strikes or friction between dry branches of trees or bamboo fragments. The main factor, however, is human activity which is responsible for 95 per cent of the forest fires in India and 90 per cent in the case of the United States. In the latter, some human-caused fires result from campfires left unattended, the burning of debris, downed power lines, negligently discarded cigarettes and intentional acts of arson.

In Brazil, farmers and ranchers have been setting large tracts of the Amazon rain forests aflame while the Government is accused of being either indifferent to, or encouraging of, their doings. According to India’s State of Forest Report 2017, people in this country set fire to forests for, among other reasons, clearing areas for shifting cultivation, non-timber forest produce collection and for hunting/poaching purposes. Another reason is making room for growing towns and villages.

Preventing forest fires will, therefore, require action on multiple fronts. The National Action Plan on Forest Fires by Forest Protection Division of the Ministry of Environment, Forests and Climate Change, released in 2019, makes a number of recommendations. These include a vigorous strategy for spreading awareness of the implications of forest fires, ensuring the participation of local communities in forest  management, enhanced training and specifically designated policies to increase the capacity of local communities to prevent and control forest fires, increasing the resilience of forests to withstand fires through management intervention and the rooting out of invasive weeds like Lantana, which contribute significantly to the outbreak of forest fires and threaten native biodiversity.

For their part, the Union and State Governments need to enhance their preparedness to act early against fire outbreaks. This would have to include an effective communications network, the use of modern technologies and products like drones to identify the exact location of forest fires and the directions of their spread, deployment of adequate manpower in fire-prone areas through the filling of all vacancies in the ranks or frontline forest officials.

All this will require money. The provision of Rs 50 crore in the 2020-21 Union Budget is not going to be enough. The argument, however, will be that even the last budget’s allocation of Rs 46.58 crore was not fully spent. While the Union Government must play its part financially and administratively, State Governments, which are responsible for forest management on the ground, need to pull up their socks.