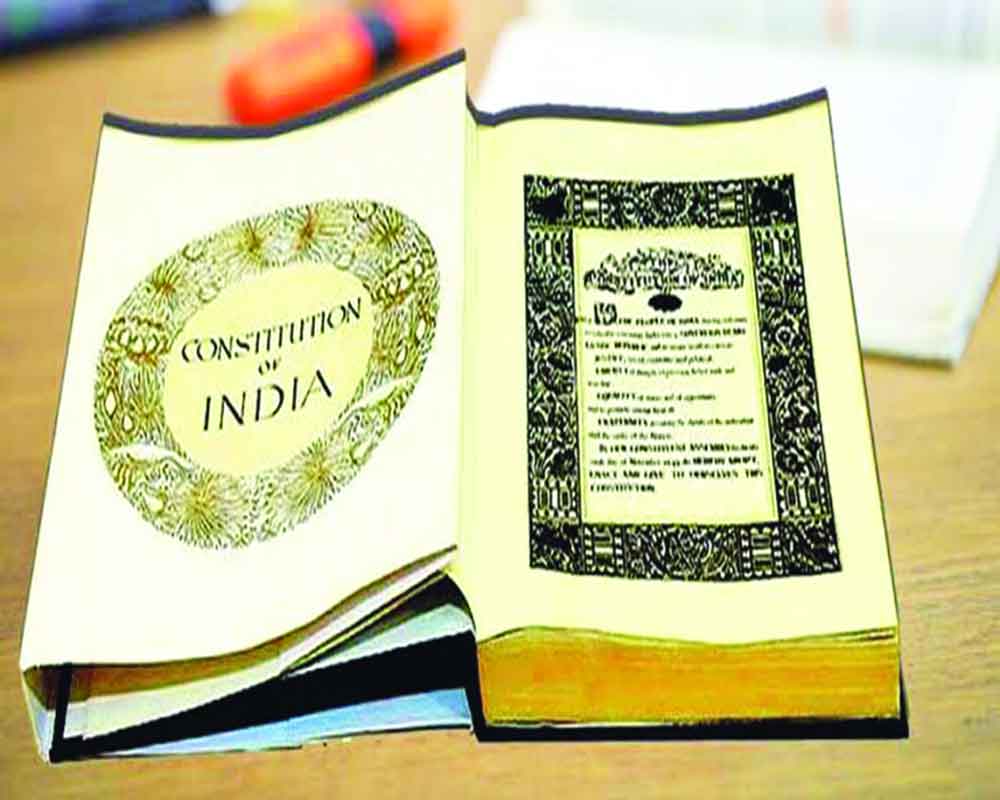 Thou art weighed in the balance and found wanting.” These words from the Holy Bible were used by Sir Winston Churchill in 1938 to criticise Neville Chamberlain, the then British Prime Minister, for signing the Munich Pact with Hitler. They can be used for the judiciary, too, for failing to protect the fundamental rights of Indians, its sacred and solemn duty under the Constitution.

The Indian Constitution, promulgated in 1950, had a part containing certain fundamental rights of the people. These fundamental rights incorporated the theory of the English political philosopher John Locke in his Second Treatise on Civil Government that every citizen had certain “natural” rights, which even the king could not violate. This theory was the basis of the Bill of Rights in the US Constitution, as well as the Declaration of the Rights of Man in 1789 by the French National Assembly during the French Revolution. Under the Indian Constitution, these fundamental rights were rights which even the legislature or the executive could not legally violate.

But who was to ensure that they were not violated? This was the job of the judiciary, which was meant to be independent of the legislature or the executive. The Supreme Court (SC) and High Courts (HCs) were set up inter alia to act as guardians of the Constitution and protectors of the fundamental rights of the people. Their judges take an oath to uphold the Constitution.

Thus, in the State of Maharashtra vs Bhaurao Punjabrao Gawande, the SC observed that while the first objective of the founding fathers was to give to the people a Constitution whereby a government was established, their second object, equally important, was to protect the people against the government.

The court observed: “The imperative necessity to protect the people’s rights is a lesson taught by all history and all human experience. Our Constitution-makers had lived through bitter years of the freedom struggle and had seen an alien government trample upon human rights which the country had fought hard to preserve. They believed, like Jefferson, that ‘an elective despotism was not the government we fought for’. And therefore while arming the government with large powers to prevent anarchy from within and conquest from without, they took care to ensure that these powers were not abused to mutilate the liberties of the people.”

In one of its early decisions, State of Madras vs VG Row, the SC held, “As regards the fundamental rights the court has been assigned the role of a sentinel in the qui vive.” This expression (‘sentinel on the qui vive’) has been reiterated in several decisions of the court. For instance in the IR Coelho vs State of Tamil Nadu; Navtej Singh Johar vs Union of India; Shakti Vahini vs Union of India; C Ravichandran Iyer vs Justice AM Bhattacharjee; Padma vs Hiralal Motilal Desarda; Bachan Singh vs State of Punjab; Indra Sawhney vs Union of India and so on.

As observed by the SC in C Ravichandran Iyer vs Justice AM Bhattacharjee, “Under the Constitution, it is the judiciary which is entrusted with the task of keeping every organ of the state within the limits of the law. The judiciary must protect the citizen against violation of his constitutional or legal rights and it must stand between the citizen and the state as a bulwark against executive excesses and misuse or abuse of power by the executive.”

In the Shakti Vahini case, the court observed, “Once a fundamental right is inherent in a person, intolerant groups cannot scuttle the right by leaning on any kind of philosophy, or self-proclaimed elevation.”

This being the settled Constitutional position, we may now ask whether the SC of late has been doing its solemn duty of protecting the rights of the people? The impression which has been created by its recent verdicts, orders and actions/inactions is that it has, with some exceptions, largely surrendered before the political executive, instead of behaving like an independent organ of the state which it was expected to be.

Consider the following instances: The SC Collegium recommended Justice Kureshi of the Bombay HC to be appointed as Chief Justice (CJ) of the Madhya Pradesh HC. Instead of making the appointment, the Government sent the recommendation back to the Collegium. Thereafter, the Collegium should have reiterated its recommendation and then in view of the verdict in the judges case, the Government would have had to make the appointment. But instead, the Collegium recommended his transfer as the CJ of the much-smaller Tripura HC.

The SC Collegium had recommended the appointment of Gopal Subramaniam — an outstanding Senior Advocate of the SC who had also been a lawyer in the famous Sohrabuddin case, and a former Solicitor-General of India — as a judge of the SC. But the Government objected and instead of reiterating his name, the Collegium went with the decision.

In the case of the Bhima Koregaon accused and professor Saibaba, the SC should have quashed the prosecution using the Brandenburg test (relied upon in Arup Bhuyan vs State of Assam, and Sri Indra Das vs State of Assam cases) but it did not even consider the same.

Abhijit Iyer Mitra should have clearly been granted bail in view of the decision of the celebrated Justice Krishna Iyer in the State of Rajasthan vs Balchand. Bail not jail, is the normal rule, unless the accused is likely to abscond or tamper with the evidence, or was accused of a heinous crime. Abhijit had only made a satirical tweet, for which, too, he had promptly apologised. Yet his bail application was rejected, with a flippant and cruel remark by former CJI Gogoi that the best place for him was in jail.

Recently, masked hooligans beat up students and teachers in Jawaharlal Nehru University, with the police apparently complicit, and about 30 people were admitted to AIIMS, Delhi with serious injuries. The SC should have suo motu issued notice to the authorities concerned and taken the guilty to task, but it did not.

The UP Police beat up the anti- Citizenship Amendment Act (CAA) protesters and even entered some houses and beat up the inhabitants, including old people. They allegedly destroyed and looted property. Again, the SC took no notice, though this was widely reported in the media and videos went viral.

Within 72 hours of his reinstatement by the SC, the CBI Director Alok Verma was removed by a panel headed by the Prime Minister. The court should have reinstated him but did not do so.

Since 2014, there have been continuous attacks on Muslims, lynchings and hate speeches. A former Union Minister even garlanded some alleged lynchers. Instead of taking strong action against the killers, often the family members of the victim are harassed, for instance Ikhlaque’s family. Surely it is the duty of the judiciary to grant protection but it rarely does anything except utter homilies.

There is frequent and arbitrary use of sedition and preventive detention laws against those who criticise the Government. For instance, cartoonist Aseem Trivedi in Maharashtra, Ambikesh Mahapatra of Jadavpur University in West Bengal, folk singer Kovan in Tamil Nadu, and Kashmiri politicians like Farooq Abdullah and others under detention, which make the right to liberty in Article 21, illusory. Unfortunately, the apex court nowadays rarely interferes in this gross violation of this most precious of all rights, although in one of its very first decisions — in the Romesh Thapar vs State of Madras case that the court delivered in 1950 — only a few months after the Constitution came into force, it had held that in a democracy people had the right to criticise the Government.

The most important case in India today is not the Ayodhya appeal but the trial of the SC itself. We are afraid the people’s faith is likely to go against the court unless it quickly recovers and resumes its role of guardian of the liberties and rights of the people.

(The writer is a former judge of the Supreme Court of India. The article has been co-authored by Advocate Janhvi Prakash. The views expressed are personal)