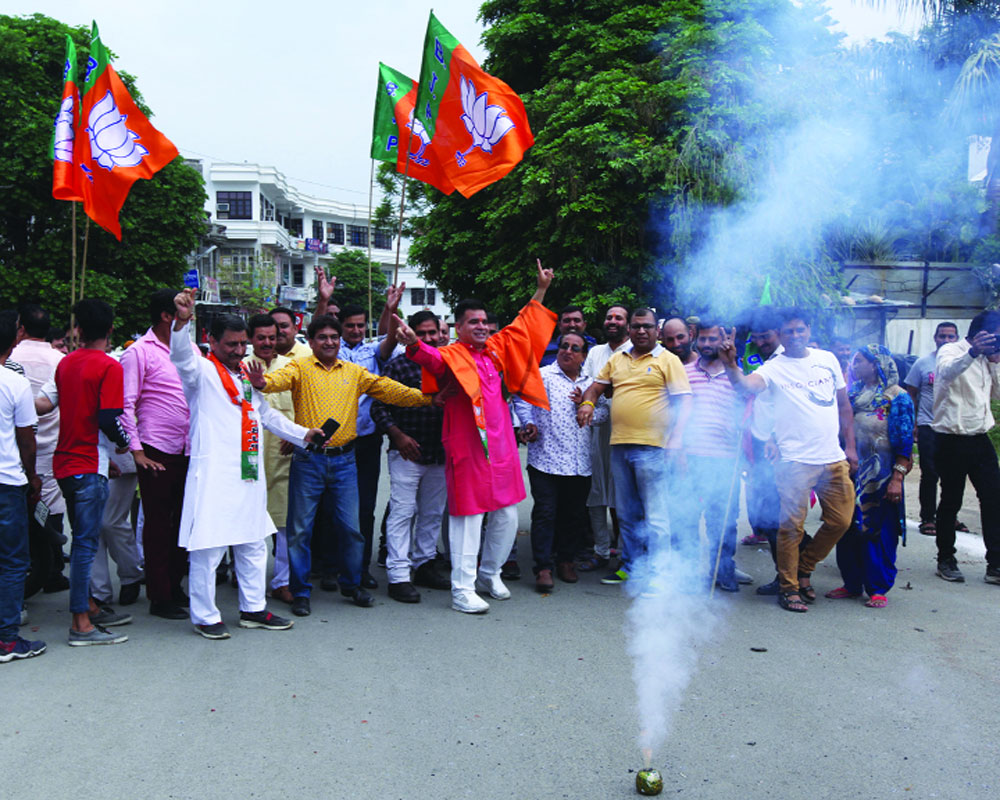 Yes, democracy has won in Jammu and Kashmir. The massive win for the Farooq Abdullah-led Gupkar Alliance in the local body elections is vindication that traditional leaders are still the people’s choice though the Narendra Modi Government had not spared any effort to demonise them as anti-nationals, separatists even, and as manipulators who smartly leverage the Indo-Pakistan dynamic. It even incarcerated them, knowing fully well that they would stand in the way of the abrogation of Article 370. That they won a mammoth victory in the District Development Council (DDC) polls, winning over 100 seats despite the many limitations on campaigning coming their way, proves that old leaders, though out of sight for a greater part of the shutdown, are not out of people’s mind. And for all the toxic tirade against them, local voters still trust them enough to be their fair representative despite the defanged status of Kashmir. So Article 370 or not, there’s no dislodging whom the Kashmiris want to lead them. The seven-party alliance, which includes Abdullah’s National Conference (NC) and Mehbooba Mufti’s Peoples Democratic Party (PDP), has defied the script and won 45 seats in Jammu, pocketing the sensitive border districts of Poonch and Rajouri besides Kishtwar and Ramban. Clearly, this is as mainstream as it can get with Abdullah proving that his appeal is still intact in Jammu. Perhaps that’s because land ownership resonates among local residents irrespective of religion or region. The new land rules, which allow outsiders to buy non-agricultural land, have agitated Kashmiris, who see this as an attempt at demographic colonisation of the Muslim-majority area. But the Dogras of Hindu-dominated Jammu and Ladakhis are not too happy about their local culture and privileges being swept away under the same clause, particularly when the Northeastern States are allowed autonomy under the Sixth Schedule of the Constitution to protect tribal land. Much of this tidal verdict has got to do with the Modi Government undoing the trust the earlier Atal Bihari Vajpayee Government had developed with the NC as its ally and which the current regime continued with the PDP. Locking their leaders up has only united them and made them martyrs to a cause, much to the BJP’s detriment, one that it could have avoided with mediatory posturing. Had the local parties contested separately, the Muslim votes would have been divided, which the BJP could have used to win more than the three seats it won in Kashmir. The force-feeding of its agenda of mainstreaming Kashmir neither encouraged a political climate even after a year of the abrogation nor helped the national party hoist a credible local alternative. It may have helped float the Jammu and Kashmir Apni Party (JKAP), drawing rejects from the PDP and NC but that has fared miserably in the polls.

The BJP, of course, has emerged the single largest party with 74 seats, mainly relying on the consolidated Hindu vote base in Jammu. But it has also debuted in the Valley, winning three seats in Srinagar, Bandipore and Pulwama. Enough for it to claim that its bold strategies in reintegrating Kashmir have rubbed off on the people a bit, if not completely. The seats it has won are significant in terms of the inroads it seems to have made on hostile ground. It, therefore, indicates a gradual acceptance of the larger reality of Kashmir’s changed status. No wonder the BJP spokespersons crowed “The lotus has bloomed” in the Valley. In Jammu, the BJP won 71 seats, scoring along expected lines. Just as expected is the decimation of the Congress which has won 26 seats, hardly relevant when Independent candidates have picked up 49 seats and are perfectly poised to be kingmakers. Srinagar is the touchstone as Independents have won seven out of 14 seats here. Assuming the Congress ultimately decides to support the Gupkar alliance, the huge number of Independents is a catchment area for the BJP’s future political laboratory. The Modi regime should have been prepared for the consequences and not pre-judged compliance by force but by gradual cooption. Of course, the BJP has got in seasoned politician Manoj Sinha as the Lt Governor, who used his acumen as a negotiator to get the political process going. But restoration of basic civil rights is still a long way off, patchy internet means the students and the new economy are left out of opportunities, unemployment is at an all-time high and the local economy is going down with a Rs 40,000 crore plus deficit. Without addressing these issues, there is no way that the BJP can claim the higher ground. Or else it could risk Kashmir as being its costliest misadventure.