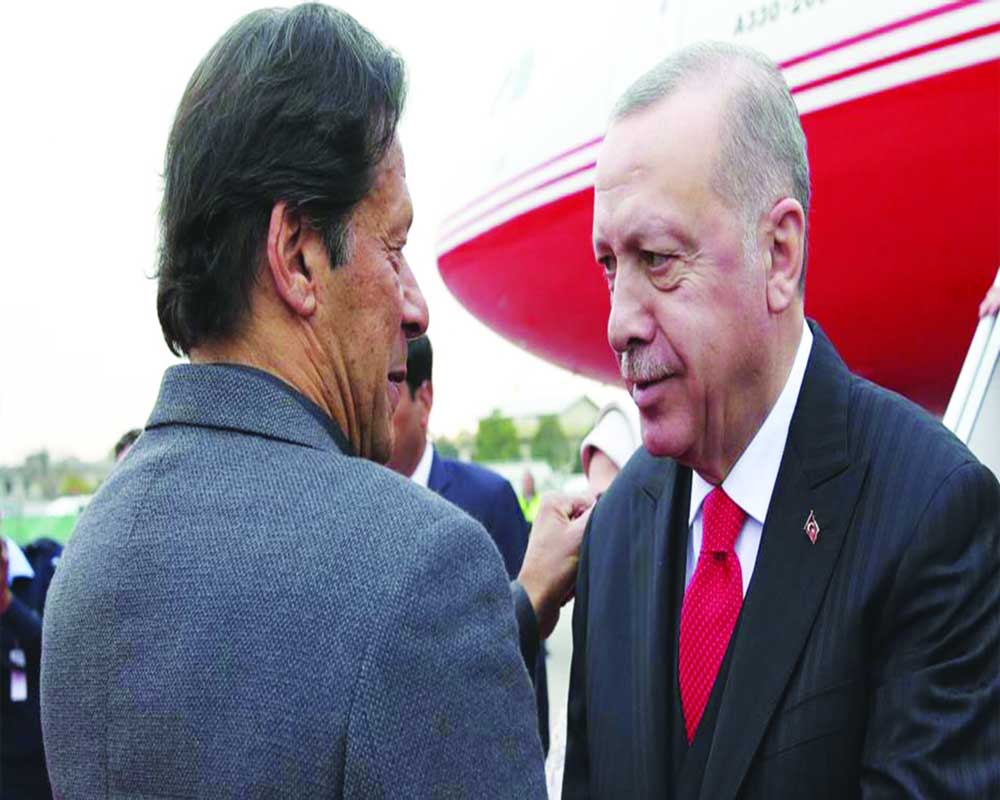 By throwing his weight behind Islamabad on the Kashmir issue, Erdogan unambiguously signalled his intention to emerge as the imam of the new Caliphate he hopes to lead

Even if we overlook the facts about which nation is “occupying” Kashmir, by stating that there is “no difference between Gallipoli and occupied Kashmir”, Turkish President Recep Tayyip Erdogan unambiguously signalled his intention to emerge as the “imam” of the new (pseudo) Caliphate he hopes to lead by 2023, the centenary of the Turkish Republic. Addressing a joint session of Pakistan’s Parliament (February 14), he lauded sacrifices made by it in the war on terror and the “positive contributions” it made to the Afghanistan peace process and promised support during the Financial Action Task Force (FATF) meet in Paris (February 16-21, 2020). His denunciation of US President Donald Trump’s Mideast plan hints at an eventual challenge to Riyadh in the region.

Erdogan’s determination to restore the Caliphate has created a visible schism between the Arab States formally led by Saudi Arabia and the non-Arab States led by Turkey. A nascent axis is discernible between Turkey, Malaysia and Pakistan; Iran and Qatar complete the anti-Riyadh alignment. Erdogan declared in February 2018, “The Republic of Turkey is a continuation of the Ottoman Empire… the essence is the same, soul is the same…”

Unsurprisingly, Ankara has emerged as the new hub for anti-India activities by Pakistan’s Inter-Services Intelligence (ISI). Unknown to most people, Turkey has universal jurisdiction laws as part of its domestic laws. Article 13 of the Turkish Penal Code states, “Turkish law shall apply to” the crime of torture “committed in a foreign country whether or not committed by a citizen or non-citizen.”

Khalistanis tried to invoke these laws. Sikhs for Justice, a group working for a referendum (“Referendum 2020”) to create Khalistan, is believed to be funded by the ISI. In October 2018, its legal advisor, Gurpatwant Singh Pannun, filed a case against Punjab Chief Minister Captain Amarinder Singh when he visited Turkey to pay homage at Gallipoli to soldiers from the First Patiala Infantry Regiment (now 15 Punjab), who lost their lives in World War I, on the centenary of the Great War.

Pannun went to Gallipoli to secure an arrest warrant and restrain the Punjab Chief Minister from leaving Turkey. As the Captain was on a non-official trip, he lacked diplomatic immunity as under the Vienna Protocol, only the Prime Minister and External Affairs Minister are “protected persons” when abroad in personal capacity. In Pakistan, Erdogan lauded a 1915 rally in Lahore, led by Allama Iqbal, where people from present-day Pakistan supported the Turkish people and blatantly ignored the sacrifices made by Indian soldiers at Gallipoli (Battle of Çanakkale), possibly because the bells tolled for the Ottoman Empire.

Turkey’s domestic laws explain why ex-IAS officer Shah Faesal was going to Turkey on August 14, 2019, soon after the Centre abrogated Article 370 and divided the State of Jammu & Kashmir into the Union Territories of Jammu and Kashmir and Ladakh. It is possible that some foreign mentors asked Faesal to invoke these laws in Turkey. He was to file a case of human rights violations against Union Home Minister Amit Shah, Defence Minister Rajnath Singh, the then Chief of Army Staff Gen Bipin Rawat and others, on behalf of his political party, Jammu & Kashmir People’s Movement (JKPM).

Media reports stated that from Ankara, Faesal was likely to try to take the Kashmir issue to the International Court of Justice (ICJ) at The Hague, the Netherlands. But this would not take off for want of jurisdiction; no individual can file a case in the ICJ, only States can. Of course, his arrival in the Netherlands would be embarrassing for India.

But if Faesal really wanted to go to The Hague, he could have taken a direct flight to Amsterdam. His plan was to exploit Turkey’s Article 13 universal jurisdiction law. Some human rights NGO would receive him at Ankara, where he would be lionised as a civil service topper (2010) and Harvard alumni who quit a Government job to protest against the activities of the Indian State in Kashmir. Actually Faesal resigned from the service in January 2019 in order to enter politics. However, the sudden split of Jammu & Kashmir and freeze on political activity nixed his unborn political career, leaving NGO activism his only alternative.

Had he reached Ankara, the international media would have splashed Kashmir on the front pages of all important newspapers and magazines and the Indian media would follow suit, thus making Faesal the global face of the anti-India Islamic movement. Once he managed to file a case in Turkey, Islamabad would almost certainly have followed up by filing a case against India at the ICJ, where it has suffered reverses in the Kulbhushan Jadhav case.

However, Faesal’s mentors could not anticipate the lookout notices for Kashmiris trying to leave the country; he was caught at the airport, sent back to Srinagar and placed in preventive custody. He has now been booked under the Public Safety Act (February 15).

This argument can be corroborated from Pakistan Prime Minister Imran Khan’s tweet on August 15, 2019, where he invoked Srebrenica, site of the 1995 genocide of over 8,000 Bosnians by the Bosnian Serb Army led by Ratko Mladic. Khan tweeted: “Will the world silently witness another Srebrenica-type massacre and ethnic cleansing of Muslims in IOK? I want to warn the international community if it allows this to happen, it will have severe repercussions and reactions in the Muslim world setting off radicalisation and cycles of violence.” The talk of “massacre and ethnic cleansing” of Kashmiri Muslims is, of course, pure bunkum but the tweet suggests an ISI hand in the aborted Turkish escapade.

Meanwhile, Erdogan has been cultivating separatist, religious and business leaders and Islamic groups in Kashmir after the tweaking of Article 370; this goes deeper than his traditional support to Pakistan at the Organisation of Islamic Conference. Previously also, he supported Pakistan in the FATF. While addressing the UN General Assembly on September 25, 2019, he chided the international community for not paying proper attention to Kashmir over the past seven decades.

Interestingly, soon after the FATF and UNGA meetings, the Indian Overseas Congress headed by Rahul Gandhi loyalist Sam Pitroda opened an office in Istanbul in November 2019. Possibly the Congress hopes to recover its once-committed Muslim vote bank by cultivating the emerging Caliphate; the repercussions on India’s internal affairs will need careful observation.