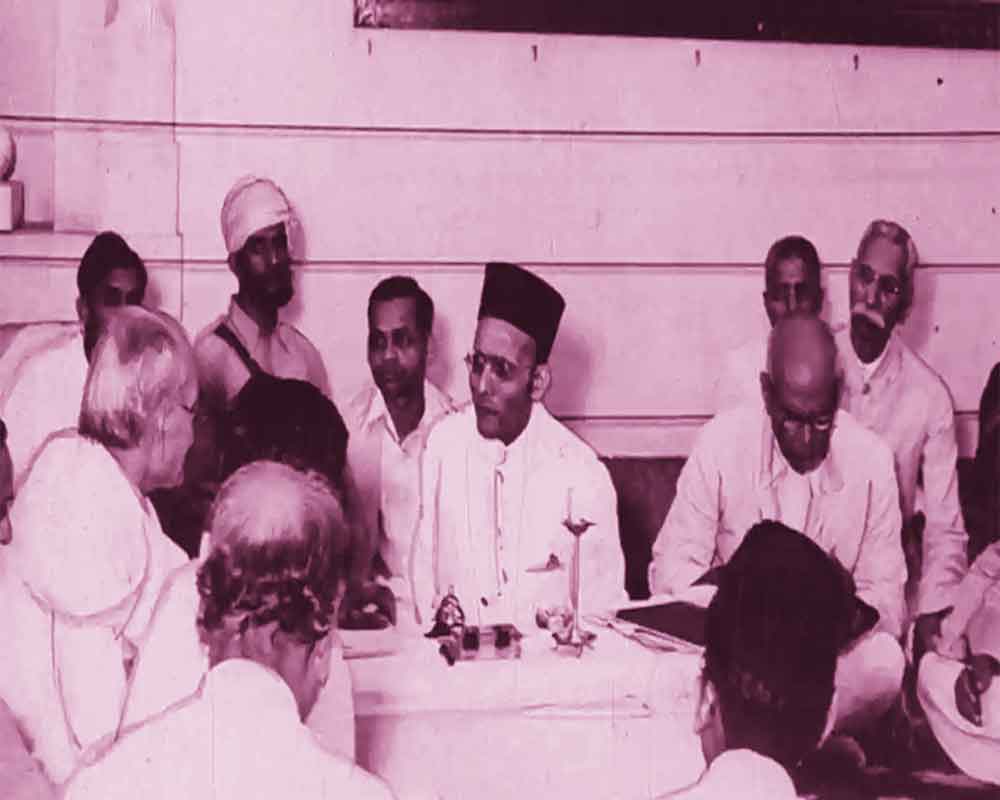 Given the ignorance of modern critics and the tragic fact that social evils still persist, it’s time to examine Savarkar’s ignored legacy as a reformer against the caste system

When Vinayak Damodar Savarkar passed away on February 26, 1966, at the ripe age of 82, despite his  health wracked by the dehumanising conditions at Cellular Jail, Andaman and Nicobar Islands (July 1911-May 1921), and further imprisonment in Alipore, Ratnagiri and Yerawada jails (till January 1924), some stalwarts remembered his contribution to the freedom movement. Prof Hiren Mukherjee, a Communist Party of India (CPI) MP, had urged the Lok Sabha to pass a resolution condoling his death. After his demise, former Prime Minister Indira Gandhi had praised him and said that his name was a “byword for patriotism and courage” and in 1970, the then Government issued a commemorative stamp.

When Pandit Bakhle, secretary, Swatantra Veer Savarkar Rashtriya Smarak, informed Indira Gandhi about its plans to observe Savarkar’s birth centenary, she replied, “I have received your letter of May 8, 1980. Veer Savarkar’s daring defiance of the British Government has its own importance in the annals of our freedom movement. I wish success to the plans to celebrate the birth centenary of the remarkable son of India.” (No. 836-PMO/80).

Indira Gandhi even donated `11,000 from her personal account to the Savarkar Trust and directed the Films Division to produce a documentary film on his life, which she personally cleared in 1983. As former Union Information and Broadcasting Minister Vasant Sathe explained, “Savarkar’s contribution to the freedom struggle has to be viewed in totality. You can disagree with his Hindutva but you cannot ignore the fact that he was a great poet and a rationalist.”

However, in February 2003, when the then President, APJ Abdul Kalam, unveiled  Savarkar’s portrait in the Central Hall of Parliament, the Congress and the Communist Party of India (Marxist) boycotted the function. In fact, influenced by some Leftists, Congress chief Sonia Gandhi urged the President to reconsider his decision to unveil the portrait, though the decision was taken by the joint committee on the installation of portraits/statues of national leaders/parliamentarians in Parliament House Complex, where Pranab Mukherjee (Congress) and J Chittaranjan (CPI) were members.

Savarkar was deeply respected by contemporaries across the spectrum. MN Roy called him “my inspiration.” C Rajagopalachari said, “Savarkar is a symbol of courage, bravery, fearlessness and intense patriotism and he is a foremost leader, who has laboured hard to ignite the desire of freedom in the Indian people (1937).” Mahatma Gandhi said, “Sacrifice is the link that binds both of us together (1944).”

Given the ignorance of modern critics and the tragic fact that social evils, which Savarkar fought against, still persist, it is time to examine his largely ignored legacy as a social reformer. Savarkar was interned in Ratnagiri district for 13 years (January 1924-June 1937) and was asked to abstain from politics, publicly or privately. So, he plunged into the field of social reform with the same passion he once devoted to revolutionary activities. He advocated social reform through his powerful writings and worked to stimulate the change he desired.

The Indian society then was suffocating under a range of taboos: Untouchability (sparsha-bandi), ban on inter-dining with certain castes (roti-bandi), on inter-caste marriages (beti-bandi), on certain occupations (vyavasaya-bandi), on travel overseas (sindhu-bandi), on rites sanctioned by the Vedas (vedokta-bandi) and ban of reconversion (shuddhi-bandi) to the Hindu dharma.

Analysing the social system, Savarkar said birth-based caste categories probably gave stability to Hindu society in the past but the present divisions rested on the debris of the ancient chaturvarna (four varnas). Disagreeing with the view that caste division was an upper caste conspiracy, he said that all castes had to share the blame as almost all used the system to assert superiority over others; hence, all should work to reform it. Savarkar said the varna-caste system was only a custom and Sanatana Dharma would not collapse if caste divisions were destroyed. He emphasised on equal access to wells and temples and said ex-untouchables (poorva-asprushya) had the right to launch civil agitations to secure their lawful rights if caste Hindus resisted.

In 1925, Savarkar organised mass singing of bhajans in small towns around Ratnagiri, urging an end to caste-based segregation in schools. He helped children of unprivileged castes to attend school by distributing chalk and slates and giving monetary incentives to their parents. He also exposed schools that continued caste-based segregation while sending false reports to higher authorities. In 1932, he asked the authorities to drop the title, “Special schools for low caste children” as it gave the children an inferiority complex. Savarkar raised a girl from the Maang community in his own home and personally taught ex-untouchables to read, write and recite the Gayatri mantra. He organised shuddhi for those who had left the Hindu fold under duress and wished to return. He supported BR Ambedkar’s Mahad and Nashik campaigns against untouchability.

In 1930, Savarkar launched the first pan-India Ganeshotsav with kirtans by the so-called untouchables. He started the Patitpavan Mandir, open to all Hindus, and said a priest need not be a Brahmin by birth but should have knowledge of all priestly duties. The temple was consecrated in February 1931 and ex-untouchable leader, Rajbhog of Pune, did pad-puja of Shankaracharya Dr Kurtakoti, thereby breaking a major taboo. The temple trustees were drawn from all varnas. Savarkar said every Hindu, whether Mahar or Maharaj (king), should have the right to recite the Vedas.

Savarkar organised several “dining together” functions, where Muslims and Christians also participated. In March 1936, the famous Marathi actor-singer, Narayan Shripad Rajhans (named Bal Gandharva by Lokmanya Tilak), visited Ratnagiri and asked Savarkar to attend one of his performances. Savarkar agreed on condition that an inter-caste dining be arranged after the show; this was done on March 6, 1936.

When a Congress Government was formed in Bombay Presidency after elections under the Government of India Act 1937, it ordered Savarkar’s unconditional release in 1937. Now free to travel, Savarkar, who had become president of the Hindu Mahasabha, visited homes of ex-untouchables wherever he toured; he would speak at Ganesh festivities only if his lectures were open to them.

Savarkar thundered against caste inequalities: Jatyuchchedak Nibandh (Essays on abolition of caste), Samaj Chitre (Portraits of society) and a drama, Ushaap (Antidote to a curse), on the problem of untouchability, abduction of women, shuddhi and the dishonesty of conservatives. Since he was confined to Ratnagiri, he wrote in Marathi to reach the local audience and stimulated significant social reform in one of the most backward districts of Maharashtra. Although his writings were not translated, his ideas and programmes spread as others picked up the threads.