The loss of leadership

The loss of leadership 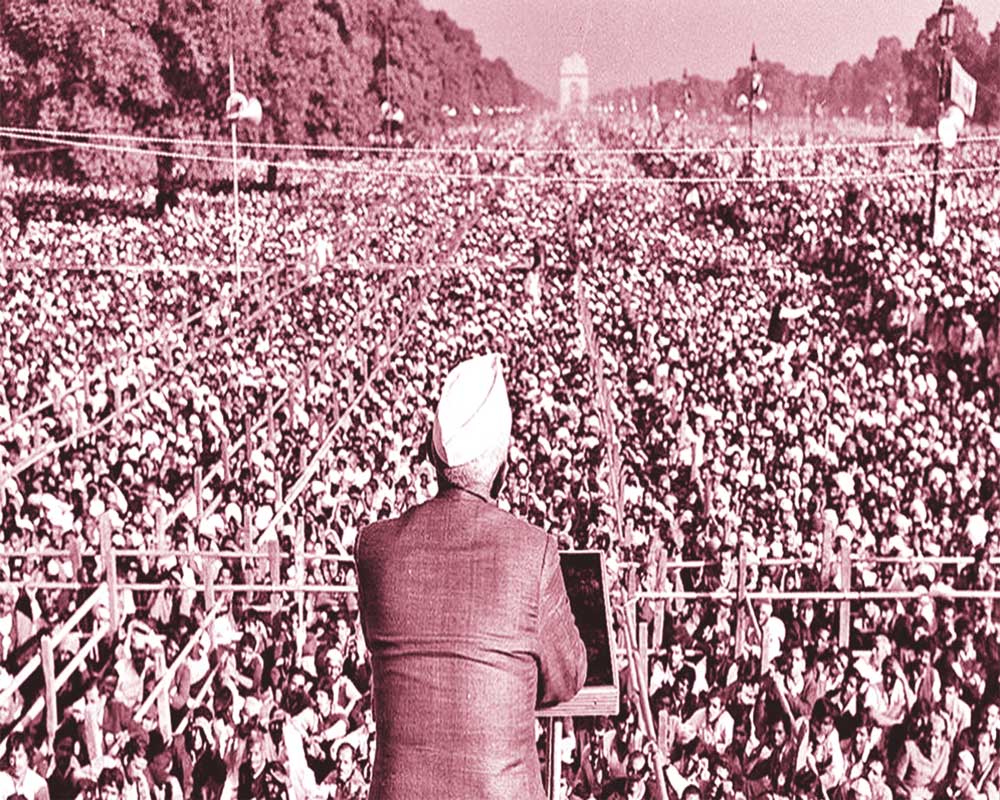 It is unfortunate that in their greed for money and power, leaders have forgotten the values as preached by our forefathers. Roots of social cohesion and religious amity have been weakened

Independent India’s first few years saw a unique kinship among political leaders and the people. The former had an aura of sacrifice behind them. This is why people adored them and had high expectations from them. Mahatma Gandhi was the cult figure, who was remembered with respect and affection in every home. In schools and colleges, young people animatedly talked about Netaji Subhas Chandra Bose, Chandra Shekhar Azad, Bhagat Singh, Khudiram Bose, Veer Savarkar, Jayaprakash Narayan, Jawaharlal Nehru and Sardar Patel among others. Even in remote villages and towns, people were aware of the Azad Hind Fauj and were convinced that Netaji would return.

One could say it from personal experience that in spite of the tragic Partition, life had returned to normalcy in the villages of Uttar Pradesh and Bihar as also elsewhere. There were no visible traces of Hindu-Muslim discord and children witnessed bonhomie in social, religious and cultural events as they grew up in a multi-religious society. They were learning to live together naturally, not under any planned initiative or project. Isolated instances of communal skirmishes were there but they did not impact the thread of social cohesion as people trusted and had faith in the leadership of the day.

However, gradually, things began to change. Those who tasted power and perks that also came associated with pelf, began to shed the values the Mahatma had persistently preached. They started ignoring his great words: “My Life is My Message.” Social scientists and other learned scholars had their own interpretations about the change that began with the infusion of debilitating elements inherent in democratic procedures, practices and parties. Gradually, people realised the fallacy of the promises made by leaders. They also began to comprehend the machinations involved to garner votes on the basis of caste, creed, religion and other such factors that would create divisions among them. Social equations and equanimity began to change and that, too, swiftly. Worse, it deliberately created distrust among communities.

The new generation of leaders that gradually emerged a couple of decades after independence realised how lucrative it could be to be at the seat of power through politics and elections. Hence, they decided to  focus on winning polls. Icons of the freedom struggle were no more; secularism was swiftly being converted into a mighty political weapon; and no wily politician was concerned about how disastrous even a small dent in social cohesion and religious amity could indeed be. They ignored the possible damage to the hallowed tradition of equal respect for all religions that was in practice for ages and for which the country was admired globally.

Such developments were not unexpected. The rise of caste-based parties contributed significantly to the erosion of pre-independent values that had the strength to sustain social and religious cohesion. Gandhi was indeed prophetic when he mentioned in a letter written in April 1922 that Swaraj or self-rule would not bring happiness to our people as four things would weigh heavily on them and they would begin to say that the earlier (colonial) system was better. The four things included defects in the election system, injustice, administrative burden and treachery of the rich.

Today, systematic defects in the way elections are conducted appear to be beyond control. For all that matters is money and nothing else. News reports in the last week of May 2019 that out of 539 winning Lok Sabha MPs, 233 had declared criminal cases against them did not surprise anybody. The way elections are won at every level has led to serious aberrations in the way public affairs in our country is conducted. It would be rare exception if someone with a pure record of selfless service wins a panchayat-level election. Social kinship stands shattered because elections are now being politicised.

Can anyone think of any election that has been fought and won within the limits on candidate expenditure as set by the Election Commission of India? So, now our leaders need money and more of it to be and remain in politics. A ray of hope did appear under the leadership of Jayaprakash Narayan during the 1977 elections when several candidates won without any resource, purely on the basis of their clean image and contributions made to the public. But all of it disappeared after 1980.

People have witnessed not only the rise of caste-based parties but more than that, they have seen how assets of some leaders have galloped at an unprecedented pace within years. Obviously, in such a scenario, there is little space for value-based politics.  And when there are no compunctions about values and principles, why care about means?  Gandhian values in politics were slowly and silently erased by those who inherited power. Loudly and unashamedly, they declared themselves as the only political heirs of the Mahatma. People trusted them and this continued for decades.

To ensure “permanency” in power, they quietly created a minority (read Muslim) vote-bank, gave them false assurances and convinced them that everyone else was against them. They gave their own interpretation of secularism, divided Hindus and Muslims up to the level of village panchayats unhesitatingly and during election time, gave tickets to candidates based purely on caste and communal considerations. It did not matter if the aspirant was suitable, meritorious or deserving. Did he really serve the people with honesty, sincerity and commitment? Leaders even preferred bahubalis (strongmen) without winking an eyelid.

The imposition of the Emergency in June 1975 and its continuance till March 1977 made the people realise how they were being taken for a ride by those very people they had trusted. By this time, the roots of social cohesion and religious amity were considerably weakened.

Consequently, the trust between two major communities came under serious stress. For electoral gains, the history of India, including the freedom struggle, was politicised. The writing of history textbooks and research was totally entrusted to the Leftists, who are known for their dislike for all that was Indian. The great Jawaharlal Nehru University (JNU) was built in a closed citadel of Left hegemony. It even refused entry to all “those who did not think alike” in their campus. Had that not been the case, today’s outburst would not have happened.

What we are witnessing today is the culmination of deliberate politicisation of age-old Indian traditions of acceptance of diversity, which have a deep philosophical basis. This is the only prophetic vision that can save the very existence of planet Earth. Think of the turmoil being faced in Europe in the wake of rapid demographic, social and cultural changes taking place there whether the Europeans like it or not. Why  should it not be appreciated that it was the impact of ancient Indian culture that while Hindus paid jazia to their rulers, they never disrespected the religious places of Muslims.

Even after Partition, India could have restored its age-old religious amity had our leaders shown maturity, futuristic vision and the urgency to bring both communities together. This was the core requirement for marching ahead on the path of growth, progress and development as Jayaprakash Narayan realised.  For him, everyone was acceptable if willing to come together for the nation’s cause. The merger of the then Jan Sangh in the Janata Party was the culmination of the efforts of a great visionary, who thought only of India, the welfare of its people and their future.

The violence that has occurred in a couple of universities and some other places must not be viewed in isolation. In fact, it must be seen in context with the seeds that have been sown in post-independent India by vested interests and those for whom self-interest is the only interest. Their numbers are few but institutions are invariably taken to ransom by elements who have no academic interest and are prone to prodding from unethical and anti-social elements. For those who are interested in finding solutions, one would like to submit the following from a letter Albert Einstein wrote to Gandhi and which was quoted by APJ Abdul Kalam in one his books: “You have shown through your works that it is possible to succeed without violence even with those who have not discarded the method of violence.” Was JNU not expected to strengthen this philosophy? It’s depressing that JNU, with all of its much-publicised achievements, never seriously tried to listen to those who did not think alike. It has an obligation to the nation to encourage, nourish and nurture the great dialogical tradition of the country. It must become a place of intellectual interaction. India needs leadership institutions that promote social cohesion and religious amity.