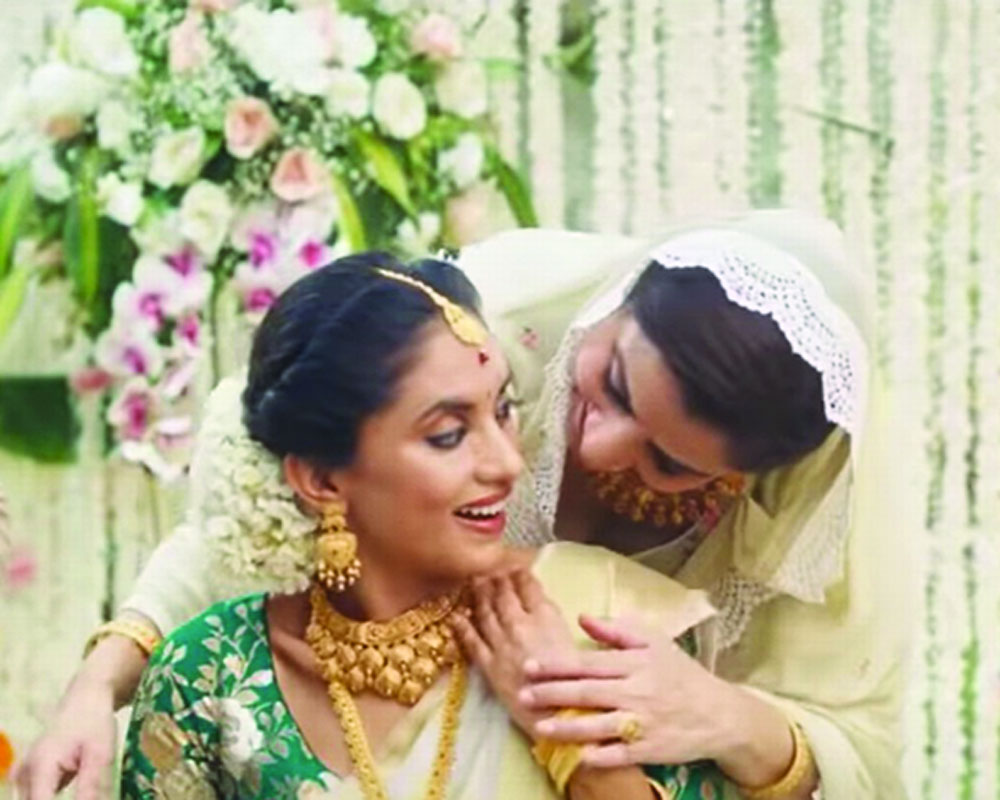 When a corporate giant with an indisputable standing takes down an ad of its jewellery company that celebrates inter-faith marriage and the birth of a baby resulting from that union — simply bowing to the majoritarian sentiment of the day — then we should worry about the India of tomorrow. For it means that the politics of polarisation has completely taken over the cultural domain and the nation’s collective mindspace. The ad had a beautiful story of a Hindu-Muslim marriage, where the Muslim mother-in-law is seen to have arranged a godh bharai or baby shower ritual for her Hindu daughter-in-law, an example of the inclusivity and love that the brand wanted to communicate. But Right-wing trolls ripped it to shreds, saying it promoted love jihad. This after our literature and films have forever celebrated the plurality of Indian life and the countless inter-faith marriages in reality. Besides, the ad showed that the woman was free to pursue her own religion and rituals in her marital home and was not co-opted. The love jihad messages flooded social media to such an extent that the company removed the video campaign rather than risk negative publicity. In other words, the boycott calls and the cancel culture are assuming such hydra-headed dimensions that they are potent enough to determine market economics now. The sad part is if bona fide corporations take a step back and let the dominant sentiment take over, it only lionises bigotry. The sadder part is that the same jewellery brand has used its festival campaigns to convey beautiful social messages before. The saddest part is that many controversial ads have been pulled out after a public outcry, mostly because they were of a sexual nature and not for conveying the story of a confluence of religion and culture in family life.

Many proponents of Hindutva claimed victory after the ad was withdrawn but can they ever stop the harmony and plurality embedded in our civilisational DNA? A similar reaction was seen when a detergent brand tried something similar with its Holi campaign last year. The one-minute long video featured a young Hindu girl, who chose to be drenched in colours to protect her young Muslim friend, who wanted to visit a nearby mosque. Some felt that Holi wasn’t given due importance and others shuddered at the thought of a Muslim man needing protection from a woman, that too, a Hindu. Advertisers force disruptions in the clutter and make us sit up and think, setting up an alternative or reasoned conversation. Today even that space has shrunk. It isn’t news that most Indian families still prefer weddings being arranged within their religion and caste. Those who break the rules and are not privileged with power or education have often witnessed violent consequences, including “honour killings.” According to the India Human Development Survey, only about five per cent of all marriages are inter-caste and inter-faith relations are even fewer. A 2016 survey by Social Attitudes Research for India (SARI) found that the majority of respondents opposed inter-caste and inter-religious marriages. In Delhi, about 60 per cent of Hindus said they would oppose a child or relative marrying a Muslim and a similar fraction of Muslims opposed a child or relative marrying a Hindu. In Uttar Pradesh, the prejudice was even deeper — about 75 per cent of Hindus opposed marriages with Muslims, and only a slightly lower fraction of Muslims, about 70 per cent, opposed marriages with Hindus. Not to forget that in 2018, the Facebook page that called for violence against 102 Muslim men, who were allegedly in relationships with Hindu women, had to be taken down. Then there are legal challenges for couples trying to get a marriage registered under the Special Marriage Act, where courts insist on all sorts of conditions like ensuring the marriage notice is publicised in local media. And in all this, love is never under discussion. And after yesterday, it doesn’t even make for a story.