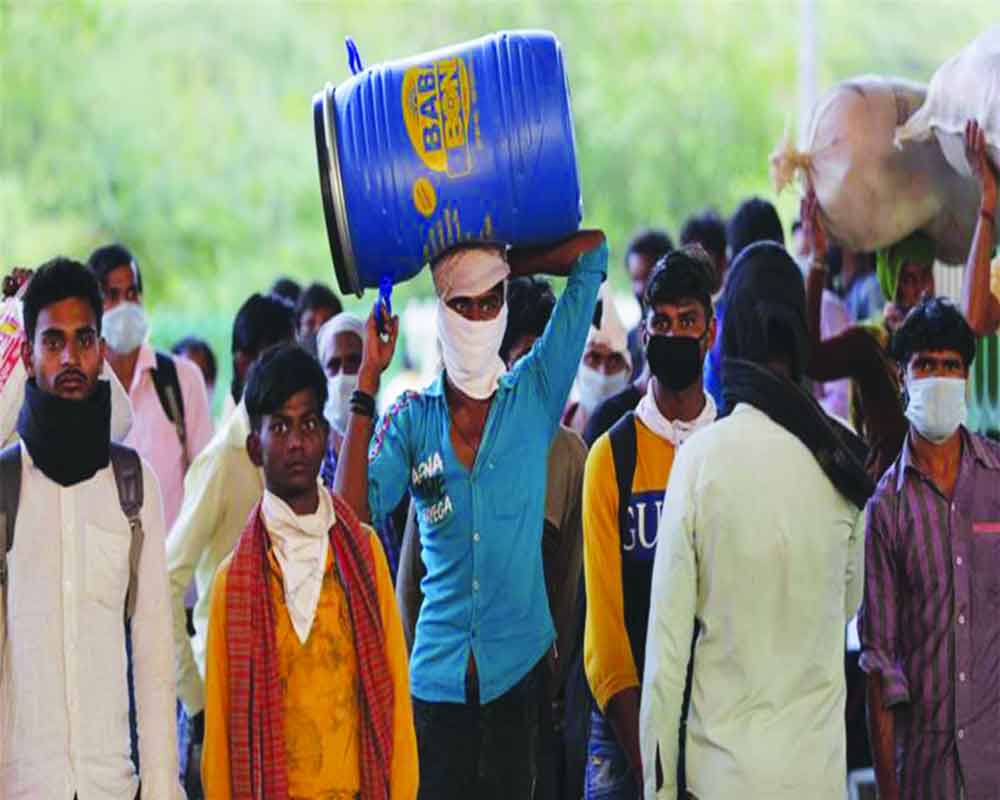 The long march of migrant workers back to their home States took the Government by surprise. It is time we have a consistent policy on this diligent segment of society

Ignorance is like knowledge, it has no limits. The colossal movement of the blue-collar migrant workers back to their home districts has exposed our ignorance about this segment. How could the Centre not anticipate its possibility when it shut down everything on minimal notice, drawing a lakshman rekha around houses on March 25? A planned evacuation, like in the case of a natural calamity, would have helped. This could have also prevented many deaths that the migrant workers are facing almost on a daily basis on the highways and railway tracks.

However, we choose to be wise only when tragedy strikes. After beating around the bush initially, branding the upsurge in COVID-19 cases as a conspiracy by certain Chief Ministers or a political party, the Centre could no longer overlook the elephant in the drawing room. Commendably, the Ministry of Railways brought the wheels back on track. The Shramik special trains were started to ferry the stranded workers back to their home districts. Post this, the Union Government has been proactive in combating the COVID-19 pandemic and providing relief materials. However, it chose to be wise only in hindsight when it came to migrant workers.

In a recent article, Mark Tully attributed this crisis to the class divide. Since none of our policy-makers comes from the class of the migrant workers, the mandarins of Raisina Hill could not think about their fate. One would like to cite another factor that can be termed as “dereliction of political duty.” Problems of the agriculture sector and  farmer suicides have rocked the Parliament many times. Some members have also called for convening a separate session to discuss agrarian issues and formulating a separate agriculture Budget. It is another thing that those suggestions have never been pursued.

However, this writer believes that the plight of the migrant workers in urban India, a bulk of whom belong to the unorganised sector, is actually grimmer. Agrarian suicides constitute seven to 12 per cent of all suicides in the country. Year-on-year figures are available in Accidental Deaths and Suicides in India, an annual publication of the National Crime Records Bureau (Ministry of Home Affairs). The figures are low in percentage terms if one considers that close to half of India’s population remains dependent on primary sectors like agriculture and forestry among others. The law of probability entails that half of the suicides in India should come from that sector as well. However, mercifully, this is not the case. Agriculture is in the green zone as far as suicidal deaths are concerned. Which sector is in the red zone then?

The exact situation of the migrant workers might fall through these statistics. However, a little application of the mind will reveal their plight. A person in the farm sector at least lives in his own home/native place. A migrant worker, however, is surrounded by professional uncertainties and mental insecurities. These gnaw him to the core.

But why did the plight of the people in the urban unorganised sector, many of whom are migrant workers, never capture the attention of the political class? This is possibly because nobody is sure where they have their votes. In a lecture delivered by OP Rawat, IAS (Retd), the former Chief Election Commissioner, at Jigyasa Forum, New Delhi, earlier this year, he had said that nearly five crore of the migrant workers have never been registered as voters. The Election Commission of India might have bridged that gap lately. But with a registered electorate of 91 crore out of India’s estimated population of 137 core, the saturation limit of above 18 years voters seems to have been reached in 2019 (discounting for some duplication in electoral rolls, which is likely to be streamlined in near future).

While farmers are “settled” voters, migrant workers are often not. While some of them remain voters in their native place, others change their address to the place of usual residency. This often leads political parties, both in the home and resident State, to turn a blind eye to their condition. Thus, their fate is less likely to be discussed in the legislature. It is only in the wake of the lockdown that we have been reminded of a 40-year progressive piece of legislation (formulated by the then Janata Party Government) viz, the Inter-State Migrant Workmen (Regulation of Employment and Conditions of Service) Act, 1979, which has been more honoured in breach than in observance.

A migrant worker doesn’t have the dignity associated with a farmer. As the share of agriculture contracted in the GDP basket of India, it implied more people had shifted out of that sector to become wage earners. Now, the COVID scourge has inflicted heavy damage upon the manufacturing and service sectors. It is anticipated that the unemployed migrant labour population will fall back upon agriculture for the time being. A situation close to that happened when following the destruction of industries, during the onset of the British rule, people fell back on agriculture, leading to overcrowding.

Apparently, this overcrowding was never fully outlived. Nearly a century of industrialisation failed to bring down India’s agricultural dependency in terms of employment substantially.  Notwithstanding, the share of agriculture has been reduced drastically in the GDP basket.

It is a pity that States do not have approximate figures about the number of migrant workers. Since it is the fundamental right of any citizen to move and resettle in any part of the country, the State is not willing to intervene, despite the 1979 law. However, during a reply to a question in the Lok Sabha recently (Vide unstarred question 4747 dated March 23), figures (as of 2016) were estimated to be over 100 million (10 crore). Indian Post money orders booked in Karnataka (paradoxically India’s IT State) amounted to Rs 3,259 crore out of India’s total figure of Rs 5,065 crore for the year 2018-19. The other leading States are Kerala (Rs 900 crore), Tamil Nadu (Rs 198 crore) and Maharashtra (Rs 185 crore), referring to a strong element from the migrant worker community. A recent digital wallet ad on television (Phone Pe) chose to break away from elitism and featured a migrant worker. It is an indication that the digital wallet economy is now giving challenge to “money order economy” of the migrant workers.

Economies often demonstrate great resilience in the face of tough challenges. They often recover sooner than predicted by experts. As the economy settles down post-COVID, there will be fresh demands for migrant workers. It remains to be seen whether they retake the flight of fancy back to the same place or explore local options.

(The writer is an independent author based in New Delhi. The views expressed herein are his personal)