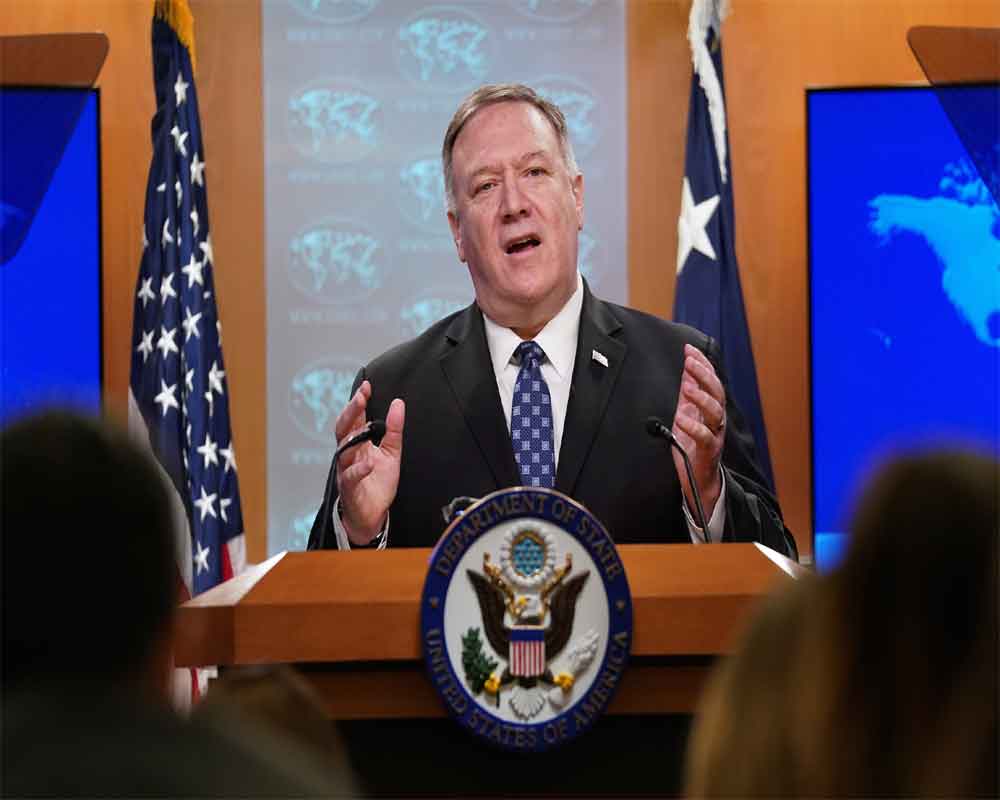 President Trump and his family visited India from February 24 to 25 at the invitation of Prime Minister Narendra Modi. Trump was accompanied by top brass of his administration, including National Security Advisor Robert O'Brien.

During his stay, the US President addressed a massive rally in Ahmedabad along with Modi, visited Agra and held official meetings in New Delhi.

Trump described the US' relationship with India now as "extraordinary" and said a lot of progress was made in the bilateral ties during his maiden official visit to the "incredible country".

Trump's "first official trip to India this week demonstrates the value the US places on the US-India partnership," Pompeo said in a tweet on Thursday.

"Democratic traditions unite us, shared interests bond us, and under the President's leadership our partnership has and will only grow stronger," Pompeo said as he re-tweeted the White House post with Trump's remarks.

"As we deepen our partnership with India, we remember that our two countries have always been united by shared traditions of democracy and constitutions that protect freedom, individual rights, and the rule of law," Trump said in the White House post that also had four pictures of his meetings with Prime Minister Modi.

In a series of tweets, Acting Secretary of State for South and Central Asia Alice G Wells said that excellent progress was made during the presidential visit to India.

"Excellent progress made this week in US India partnership," she said.

Trump's trip to India advanced the shared goals and paved the way for further cooperation in key areas such as energy, defence, people-to-people ties and Indo-Pacific coordination, Wells said.

"We made great strides to advance US-India energy partnership, including taking steps to develop India's strategic petroleum" and providing USD 600 million in US International Development Finance Corporation investment to develop solar and wind energy, she added.

"We look forward to continued engagement with our great American suppliers of energy products, including" Westing House Nuclear and "our Indian partners for big deals that will power US-India relationship into the new decade and beyond. Private sector partnerships make our economies stronger", Wells said.

As the president announced, the US concluded over USD 3 billions in defence sales to provide America's finest military helicopters to the Indian armed forces.

"We're proud to be India's premier defense partner. Together, we defend our sovereignty and protect a free and open Indo Pacific region for both our peoples," Wells said.

People-to-people ties between the two countries were stronger than ever, she asserted.

"Our Congressional representatives and Parliamentarians will hold an exchange visit for 1st time ever in April. We're working together to support human spaceflight and eager to welcome more Indian higher ed students to the US," Wells said.

The US president was feted at the world's largest cricket stadium in the "Namaste Trump" event in Ahmedabad and was cheered by tens of thousands of people.

"We were treated very, very well and we really enjoyed it. A lot of tremendous progress was made in terms of relationship -- our relationship with India is extraordinary right now," Trump said.

"We are going to be doing a lot of business with India, they are sending billions and billions of dollars now to the United States," Trump said in response to a question.

During Trump's visit, India and the US finalised defence deals worth USD 3 billion under which 30 military helicopters will be procured from two American defence majors for the Indian armed forces.

The deals will include procurement of 24 MH-60 Romeo helicopters by India from the US at a cost of USD 2.6 billion. Another contract to acquire six AH-64E Apache helicopters for USD 800 million from the US is also on the table.

In another tweet, Wells said, "Our hearts go out to the families of the deceased and injured in New Delhi. We echo PM @NarendraModi's call for calm and normalcy and urge all parties to maintain peace, refrain from violence, and respect the right of peaceful assembly."