Market to the rescue

Market to the rescue 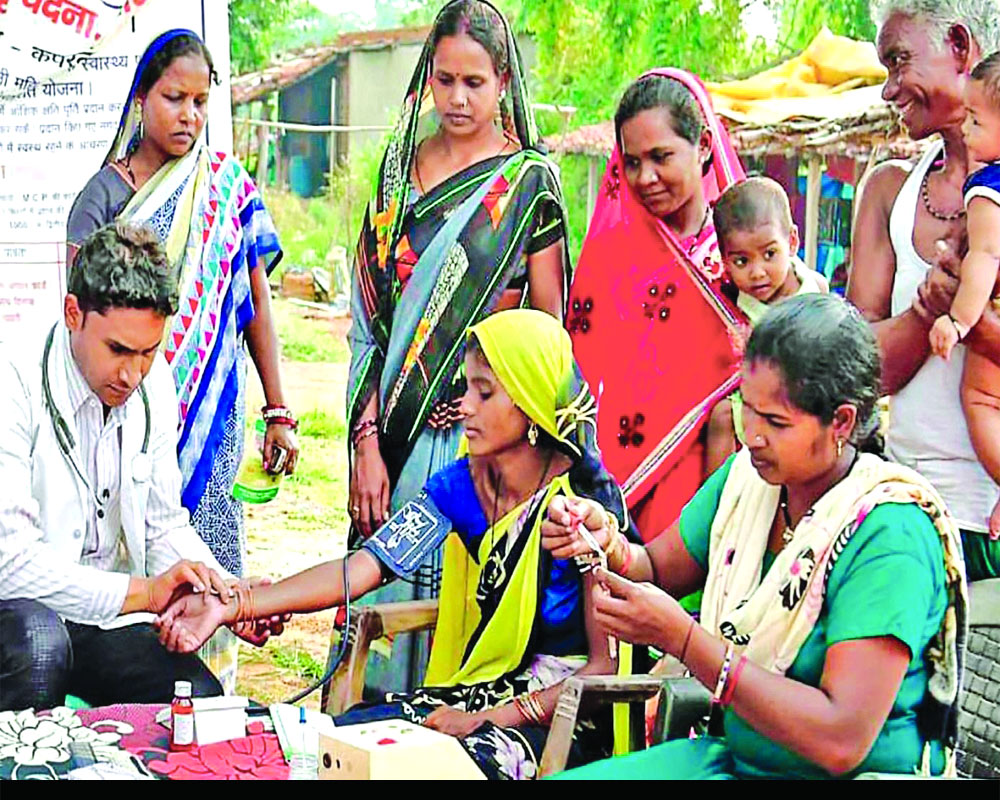 The Haat Bazaar clinics in Chhattisgarh are making healthcare accessible to the rural and tribal population, who would reach out to the local quacks otherwise. By Sarita Brara

Kohiti Bai, a resident of Dhaneli village in the Naxal-affected Kanker district of Chhattisgarh, was at the mercy of quacks for her treatment of an unknown ailment. It was during a random health check-up at the Haat Bazaar (local market) Clinic at Tarandul, where she was diagnosed with high sugar levels. Hailing from a pahunch vaheen (inaccessible due to Naxal activism) village, the former sarpanch Kohiti was initially reluctant and insisted on continuing her treatment with a local quack.

“After a lot of persuasion and motivation by the Haat bazaar Clinic staff, she agreed for the treatment,” said Navin Pandey, Rural Medical Assistant, who is also in charge of the Hatkarra sector in Bhanupratappur area of the district. Kohiti’s diabetes is now under control. Seeing a vast improvement in her sugar levels, Kohiti has now started visiting the check-up centre regularly to get medicines for her treatment or sometimes, she also pays a visit at the bazaar Clinic, as per her convenience and medical requirements. More importantly, using her influence as ex-sarpanch, she has been able to motivate others to come to the Primary Health Centre (PHC) and the Bazaar Clinic.

Following that, a fall in the villagers’ dependency on the quacks has been observed. “Seeing the improvement in my health, villagers were curious to know about the treatment I had been taking. I told them about the clinic and the convenience it offers. Having been a sarpanch earlier, I was able to convince them to consult the doctors at the PHC for check-ups and treatment for unknown ailments,” said Kohiti.

Not just quacks, owing to unawareness and high rate of illiteracy, many people depend on the so-called mendicants or faqirs, who claim to treat people with occultism or other powers they claim to possess. Being dominated by tribal population, these remote areas with difficult topography lack presence of health facilities. Hopeless, they turn to such quacks for treatment. It is mainly to cater to the health issues of people residing in nondescript villages that the Mukhyamantri Haat Bazaar Clinic Yojana was launched in October 2019.

One of the major benefits of these market clinics is that many a times, ailments and diseases can be detected at the initial stages, which allows for timely treatment avoiding alarming or severe situations.

It was during a random health check-up at the clinic at Koda village in Khadganva block of Koriya district, when Dr Tejkant Sonkar, sector in-charge, PHC, Salka, suspected a man of having leprosy. He was asked to get his test done at the PHC which confirmed the doctor’s fears. The man is now availing treatment at the PHC. The early detection of the disease and the start of the treatment means that the man will be cured of this disease that is tagged with social stigma.

Dr Sonkar shared that among the many challenges they face, convincing the tribal villagers to take treatment is the most difficult task. The unawareness deeply rooted in their belief system has created a gap between them and the government trying to tackle the misconception. People in several villages still prefer to consult quacks.

“One has to adopt different ways of persuasion, coaxing and sometimes warning of the dire consequences of not taking the right treatment. This helps pushing the villagers to go for further health check-ups at the PHCs and continue with the prescribed treatment,” explained Dr Sonkar.

It is easier to do the tests at the clinic, where villagers come to buy or sell their goods. The issue of accessibility and availability is addressed through these haats as they form an important part of rural life. Here, many villagers agree for random check-ups. As per Dr Tejkant, many of the villagers suffer from high blood pressure. While some agree for treatment at the PHCs, many of them just don’t bother. It is only when the situation grows serious and the quacks are unable to handle that they come to the PHCs.

Dr Gyanendra Kushawaha, Ayurveda Chikitsa Adhikari, Khadgawan sector, Majhhauli Haat Bazaar agreed with Dr Tejkant. “Due to availability of Mahua — a prominent forest tree in the tribal area — the villagers drink the local beer made from its flowers and believe that this is the cure of all diseases,” explained Dr Kushawaha, pointing towards the level of misconceptions the villagers have.

Many deaths have been reported in the past due to snake bites as even in such serious scenarios, tribal villagers prefer going to the quacks than visiting a doctor. The field workers face a difficult time trying to spread awareness among the people.

“The ongoing COVID-19 pandemic has acted as a further deterrent as the number of people in these villages coming to the PHCs has reduced because of misconceptions and doubts about the pandemic despite the spread of awareness,” said Dr Kushawaha.

When the Haat Bazaar Clinics were re-organised after the nationwide lockdown due to the pandemic, they were used as a platform to create awareness among villagers. Rapid antigen tests for COVID-19 were also conducted.

Over 1,200 Haat Bazaar Clinics were organised across all the districts of the state and nearly 1.1 lakh people have been benefitted from these health clinics from July till November during the current financial year. Nearly 97,000 patients were given medicines for various ailments as per the details provided by Dr Kamlesh Jain, state nodal officer of the Haat Bazaar Clinic scheme.

As per Dr Jain, rural and tribal area mobile clinics should be merged with the Haat Bazaar scheme for synergic impact. “Besides continued monitoring of the implementation of the scheme, adequate and dedicated human resources and improved mobility will enhance the quality and assurance of this scheme,” advised Dr Jain. He also feels that the scheme will win the trust of the people if referrals from Haat Bazaar Clinics get priority at the higher health facility centres.

The concept of Haat Bazaar Clinic is ideal for villagers as most rural people flock together for treatment at these clinics where healthcare workers, besides treatment, provide consultation, medicines, follow-up course and pathological facilities. The only thing required at the moment is to make this scheme more effective by listening to the voices of the experts working with the villagers.

It will address the urgent need of improving healthcare services accessible and available for the remote, rural population of the country.