Don’t punish all for the sins of a few

Don’t punish all for the sins of a few 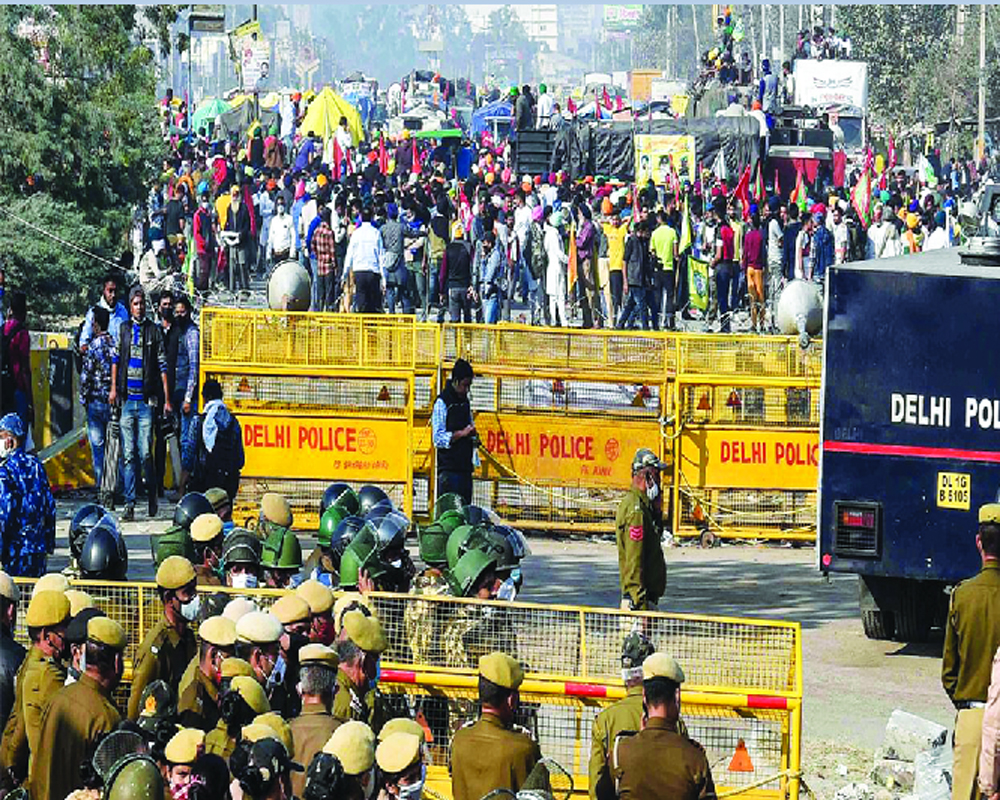 To emerge victorious the Government should embrace the farmers’ cause, and not ignore it because of violence by a few miscreants

India’s 72nd Republic Day was marred by unprecedented violence and mayhem in the Capital. On one hand the country showcased its military might at the historic Rajpath, while on the other hand chaotic scenes were witnessed with a sea of farmers storming the Capital and laying siege to the  Red Fort. The miscreants also hoisted a religious flag from the ramparts of the iconic building. Why is it that State violence bring “peace and stability” while  outbursts by citizens end in chaos and obloquy.  Russian novelist Fyodor Dostoevsky’s famous character from the acclaimed book ‘Crime and Punishment’ Raskolnikov, often thought: “When is murder (violence) right?” He asked himself why was Napoleon France’s greatest hero despite butchering millions, while he (Raskolnikov) felt extreme guilt even as he served a sentence in prison for murdering a tight-fisted moneylender?

The unfortunate events that took place on Republic Day at the Red Fort will remain a festering wound on the farmers’ movement forever. It was a dark day, not only because of the mayhem and riots that took place but also because the cause of thousands of peacefully demonstrating farmers was lost in oblivion after the dark clouds of violence engulfed the Capital.

Farmer leaders like Rakesh Tikait and others have been named in the First Information Reports (FIRs) that were lodged soon after the incident. Meanwhile, the “godi media” has already declared farmers and their leaders guilty and their media trial has begun. On the other hand, Deep Sindhu who is allegedly one of the main conspirators behind the chaos that erupted in Delhi, roams free. In his own video he is seen at the Red Fort inciting the farmers. Opportunist leaders have already parted ways and the issue at hand is no longer agrarian distress but “us and them.”

“Violence begets violence”, the Government’s response was quite natural. But let us heed the warning of Bertrand Russell and “examine the facts” by ourselves.  Those who were present at Delhi’s Ghazipur border when the farmers broke the barricades, narrate a different story. Of course some people were adamant on breaking the barriers, but a majority of the farmers resisted this attempt and were peaceful. Police surveillance footage would also confirm the same. Rakesh Tikait and other farmer leaders stood between the protesters and the barricades and stopped the protesters from breaking the barriers. They even fought with some of the farmers and tried to save the policemen. It was due to their efforts that a major part of the tractor rally stuck to the designated route and did not enter Delhi. These leaders even managed to call back some of the tractors that broke through the barricades.

Reports from Singhu and Tikri, too, indicate that the farmers’ leaders stood their ground and prevented major violence. It would not be an overstatement to say that they collectively managed to transform a potential nuclear explosion into a pressure cooker blast. But nevertheless there was violence by some people, which marred the  peaceful spirit of the movement that had been going on for two months. Only an impartial investigation can  reveal the truth.

We must not forget that it is these farmers who feed the policemen on duty at the protest sites. The policemen also enjoyed the langar that has been set up by the farmers.  The big question is why the peace loving community of farmers would resort to violence and anarchy all of a sudden? The answer is that they were instigated by a few unscrupulous elements bent upon discrediting the stir, the cause and the peaceful growers. It makes sense that the farmer unions have also asked for an investigation into the links of Deep Sindhu with the BJP.

What we saw was a nefarious tactic of breaking a democratic movement with splinter groups, strike breakers and radicalised individuals. They discredited the peaceful movement with this one act of violence.

The Centre, which now has the upper hand, has already given an ultimatum to the leaders. They must acquiesce to the Government’s proposal or there would be no further talks and there would be police action. Now the question remains, should the farmers’ leaders take moral responsibility for the violence unleashed by saboteurs and rabble-rousers? Let us look back a year to the Delhi Riots in 2020. Should any of those leaders who were allegedly involved in the riots have taken moral responsibility for the bloodshed? They should have, but they didn’t. So why should the farmers’ unions do so? Machiavelli too gave us a mantra for the future: “He will be successful who directs his actions according to the spirit of the times and he whose actions do not accord with the times will not be successful.” The age of violence is upon us and if Machiavelli is right a non-violent person cannot win in violent times. Farmers unions need to prove Machiavelli wrong and Gandhiji right.

The unions are definitely on the back foot in the media and are fighting with their backs against the wall. If tomorrow the investigations reveal collusions between miscreants and the Government, all hell will break loose. Always keep in mind,  that violence at the Red Fort, may actually resonate with the masses and will add to the polarisation on both sides of the electoral base. To emerge victorious the Government should embrace the farmers’ cause and not obfuscate it because of violence by a few miscreants.

(The writer is Programme Director for Policy and Outreach, National Seed Association of India. The views expressed are personal.)

Several injured in as supporters of sitting, ex-pradhans clash

Purvanchal Expressway to be extended to Bihar from Ghazipur

3.50 lakh in the fray for first phase of panchayat elections