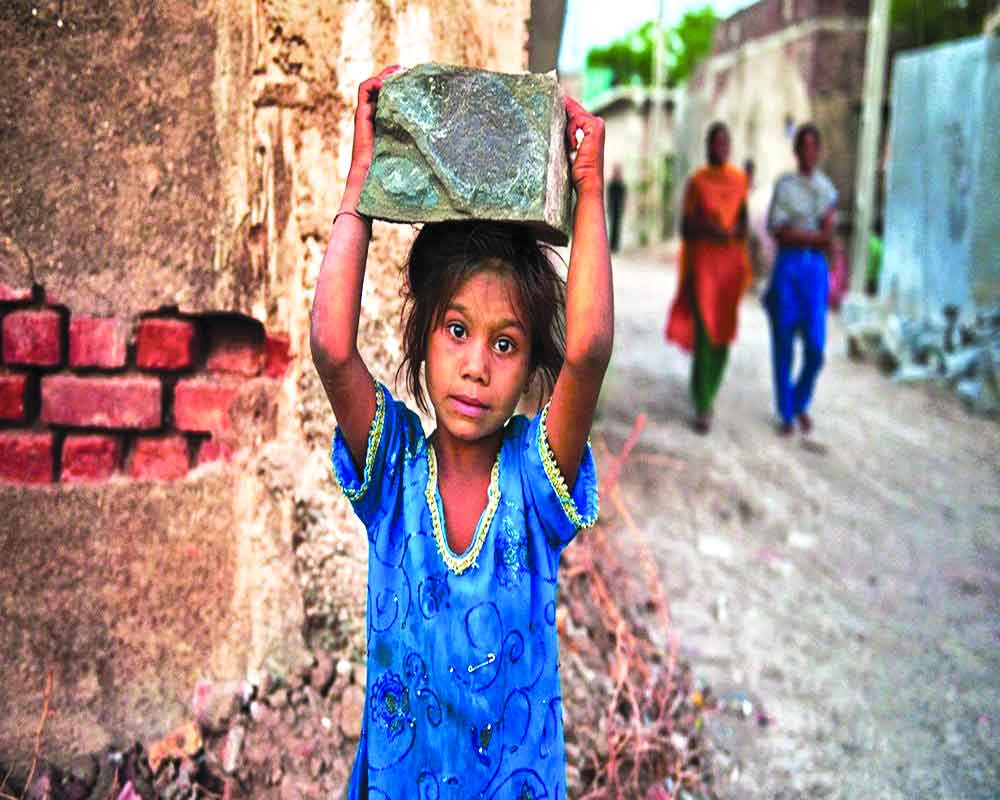 There is a dire need for global social protection reforms for children in order to mitigate child labour, abuse and exploitation across the world

India is home to over 30.3 per cent of extremely poor children. These children, especially girls, suffer systematic discrimination and exclusion in the form of higher school dropout rates, and greater vulnerability to child labour, trafficking and child marriage. Multiple development schemes for poverty alleviation and enhancing social security in rural areas exist, but there is a glaring absence of direct assistance.

The pandemic has dirupted the access to healthcare, nutrition, education, water and sanitation, social and child protection. This in turn has made children more vulnerable to deprivation, abuse and exploitation.

India took a major hit on the economy whose brunt is being borne by children. Yet, instead of prioritising child social protection reforms budget, budgetary allocation for children was reduced. The overall outlay for the Union Budget 2021-22 was Rs 3,483,235.63 crore, and the total allocation for children was Rs 85,712.56 crore. While the total Union Budget (BE 2021-22) saw an increase of 14.5 per cent, the share for children declined by 10.8 per cent compared to 2020. This year’s share of budgetary allocation for children in proportion to the Union budget has been the lowest in the last 10 years. It is reduced by 2.05 percentage points: To 2.46 per cent (2021-22 BE) from 4.51 per cent (2011-12 BE). This will not only make it difficult for India to attain meet its international commitments, constitutional mandates and the Sustainable Development Goals (SDGs) but it will further push children to the most marginalized and dangerous corners of the society.

The total budget for the Ministry of Women and Child Development has seen a significant decline as against the previous year. The introduction of Saksham Anganwadi and Poshan 2.0 have emerged as critical schemes to support existing schemes such as Anganwadi Services, National Nutrition Mission, National Crèche Scheme and Scheme for Adolescent Girls. It received a total allocation of Rs 19,412.6 crore. However, the combined allocation for these four schemes in 2020 was Rs 23,941.41 crore, roughly 19 per cent higher.

In fact, there was an increase in crime against children during the pandemic, but the budget allocation for child protection was cut down 40 per cent for the FY 2021-22, as against FY 20-21.

The United Nations has marked 2021 as the International Year for the Elimination of Child Labour. Data from International Labour Organsation and the UNICEF show that since the start of the SDGs in 2016, an average of 10,000 children of 5-11 years were pushed into child labour every single day.

The founder of Laureates and Leaders for Children, Nobel Peace Laureate and UN SDG advocate Kailash Satyarthi, has demanded the creation of a Global Social Protection Fund with a fair share of direct benefits for children in the poorest communities. This is necessary to overcome the growing inequality and to save the future for children globally. This includes school feeding programmes, access to free and quality education and healthcare, safe housing, clean water and sanitation. The low-income countries should invest in national social protection floors. These form the safety net that is necessary for every child in the world to live a life of dignity, irrespective of where they live.

Recently, The Laureates and Leaders for Children launched the Fair Share to End Child Labour Campaign and hosted a UNGA side event that was co-sponsored by the Government of Sweden, the Norwegian Ministry of Foreign Affairs, and the ILO involving global leaders, former child laborers and present advocates as well as youth activists coming together to demand action to end child labour, a fair share for children and to pledge their commitment to end child labor. The campaign also involved grassroots awareness programs that took place in marginalised communities.  Mr. Satyarthi, in his speech at an event of the United Nations General Assembly stated “$52 billion which amounts to just 2 day’s worth of COVID relief in G7 countries last year and 0.4 per cent of social security expenditure in Europe, which can give social protection to every child and pregnant woman in low-income countries. This can end child labor and reduce poverty.”

When families are denied support for their basic needs like food and healthcare, and forced to live in dire conditions, their children can be forced into child labour. Social protection is necessary to stop this injustice.