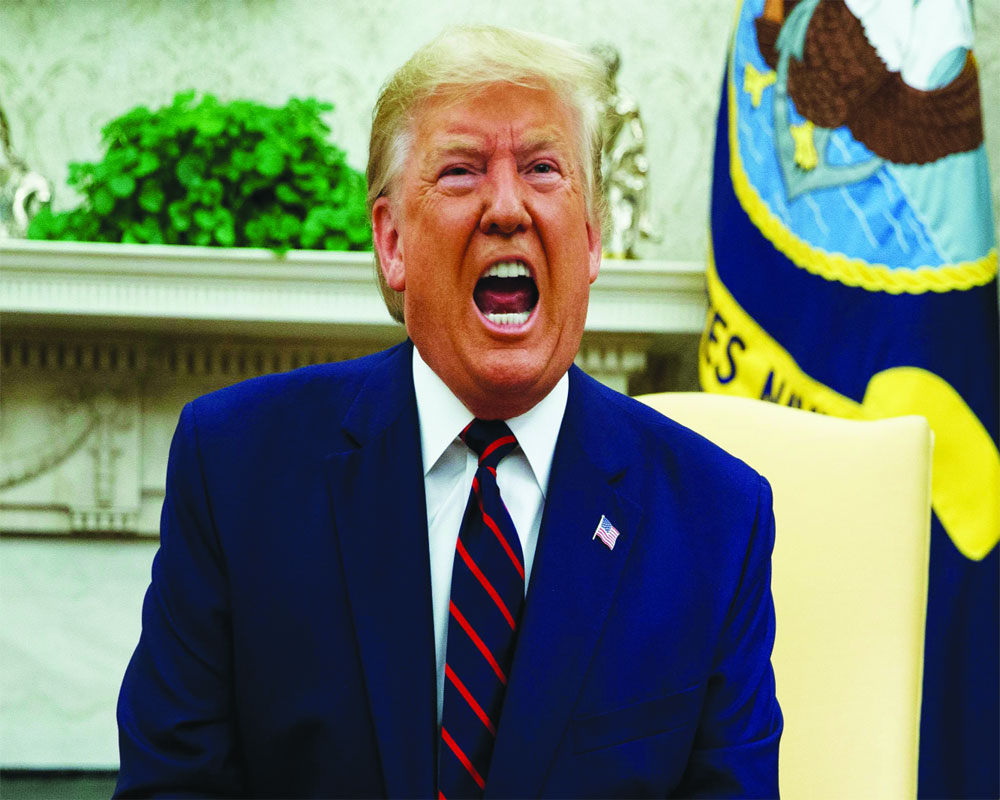 Though only three US Presidents have been tainted with the blot, Donald Trump is the only one who has faced two impeachments

Impeachment is essentially symbolic, but the sort of sticky symbolism with a moral dimension that stands the test of time. History books that transcend time and lives bear the impeached person’s name with an unflattering asterisk of transgression. Only three Presidents of the United States (US), out of the 45 that preceded Joe Biden, were tainted with this blot, with Donald Trump going down in posterity as the unique one, with two impeachments! The Constitution of the US describes acts that are deemed “treason, bribery, or other high crimes and misdemeanours” to be impeachment-worthy. Beyond the legality of formal conviction in a classic justice sense, impeachment is tantamount to abuse of public and constitutional trust, with possible intersection of legal criminality, subsequently. But the man whom the usually reserved Dalai Lama suggested had a “lack of moral principle”, i.e. Trump, remains brazen and unrepentant.

Others like Richard Nixon, who had faced a near-certain prospect of getting impeached, had resigned from office just before impeachment. The other two impeached US Presidents, Andrew Johnson and Bill Clinton, had in hindsight considerably less deleterious and violative portents to democracy as compared to the ingloriousness of Trump’s acts. Andrew Johnson, arguably a racist himself who had succeeded the colossus of democracy, Abraham Lincoln, was impeached for a technicality of violating the Tenure of Office Act when he removed a federal appointee without consulting the Senate. History reflects that impeachment as more of a partisan act that seized upon an unacceptable presidential action but perhaps not warranting the burden of impeachment. Similarly, Bill Clinton had perjured himself by lying to the investigators about his relationship with Monica Lewinsky, as also encouraging the White House staff to toe the said line. The undeniable dereliction and misconduct was perhaps still short of breaching the high rails of “treason, bribery, or other high crimes and misdemeanours”. The fine difference was illustrated by a rival Republican Senator, Susan Collins, who agreed that Clinton had conducted himself disgracefully, but perhaps short of a crime, when she still voted against the impeachment by stating: “In voting to acquit the President, I do so with grave misgivings for I do not mean in any way to exonerate this man.” Bill Clinton was visibly, and admittedly, embarrassed and repentant.

Trump was, on the other hand, first impeached for the abuse of power and obstruction of Congress. He had allegedly pushed Ukraine to snoop into the commercial affairs of his ultimate nemesis, Joe Biden, and therefore enlisted a foreign power in corrupting the democratic elections. Trump had also withheld military funds from the Ukrainians in order to coerce them to do so. But Trump’s misdemeanours had continued with his denialist approach by further ordering the Executive Branch to not comply with the Congressional subpoenas for the trailing documents and testimonies. However, unlike the bipartisan expressions that surrounded the Clinton or Nixon build-up, Trump had managed to polarise and divide the nation into extremities that ensured that, barring one Republican Senator, all had acquiesced blindly to Trump. The second Trump impeachment was unprecedented in its seriousness of accusative import, “incitement for insurrection”. The self-interest of Republicans, which was in play to defend Trump during the first impeachment on partisan lines, was equally visible in the second impeachment, with 10 Republican Senators disassociating themselves from supporting Trump, owing to worse consequences in repeating their partisan decision. The Joint Chief of Staff had issued an internal memo that sought to remind the uniformed fraternity of their sole fidelity to the Constitution and alluded to the potential disruption of the Biden inauguration as “against the law” — further suggesting the graveness of the unconstitutionality that Trump was accused of.

The weight of the 10 Republicans who bolted out of the Trump bandwagon is much more than its arithmetical significance, as it is about the assertion of bipartisan courage, democratic values and basic common sense. In many ways, this internal dissenting note has allowed the Republicans of absolve and permanently cleanse themselves of Trumpism, post-January 20, 2021. While the impeachment process was rushed through the last days of Trump’s presidency, its necessity is contextualised to the public healing of the shame of “coup” and offering a restorative opportunity and agenda for bipartisan politics hereinafter. The singular Republican who had yielded to the dictates of his personal conscience in voting against Trump’s first impeachment, Mitt Romney, noted evocatively in Trump’s second “coming” that there must be “meaningful consequences” when a President incites an attack against the Congress and, more importantly, against all known tenets of democracy.

notoriety that had toyed with reckless ideas like attacking Iran before elections, imposing quasi-martial law or actually triggering social unrest by insisting upon his allegations of “fraudulent elections”, “can’t play in the hands of these people”, “elections that were stolen” and suchlike, has already brought the US to the unthinkable brink of anarchy and civil war. The isolation of Trump among his own party leaders and ostensible loyalists has shifted gears from private murmurs behind closed doors to open calls for introspection within. The triggers for the much-needed course correction have not been the legality, but the loss of morality, surrounding Trump’s indefensibility. In a shifting sign of times, Republican leader Mitch McConnell had freed Republican Senators from toeing any party line and, instead, urged them to “vote with their conscience”; the subliminal writing on the wall for Trump is unmistakable. Indeed, Trump will be expected to continue his slanderous rants, unsubstantiated falsehoods and desperation to retain the centre-stage but the loss of moral high ground for the Republican Party, going forward, will drop Trump from the only political anchorage that sustains his relevance. It is not the electoral triumphs, unchallenged dominance or legality in the court, but the diminishment of morality as captured in this symbolic impeachment that ended a destructive streak and individual.