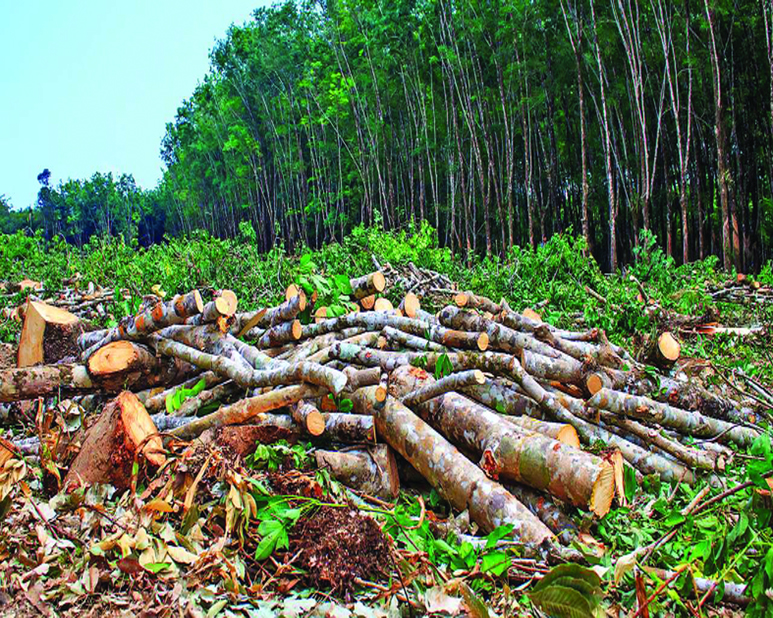 Insects help break down organic matter like corpses and animal faeces. This is important as it reuses nutrients, making them available for aerating the soil

Rewilding is a progressive way to conserve the environment. It is a form of environmental conservation and ecological restoration which has significant potential to increase biodiversity, create self-sustaining environments, and mitigate climate change.

There are two main approaches to rewilding: First, it enables degraded lands to recover by preventing anthropogenic influences, and allowing nature to conserve itself with minimum human interference. Second, re-introducing lost or dwindling plant or animal species into their natural environment,enabling restoration of their populations and ecological balance.

Rewilding does not take place only in protected areas or remote locations. Examples of this can be seen in many cities. Over the years, mining has caused rampant destruction in parts of the Aravalis, in Gurugram, Haryana. An NGO led by Latika Thukral and her team has healed nearly 550 acres of land and converted it into the Aravali Biodiversity Park by planting thousands of saplings. Today, it is a repository of native flora and fauna, which also has a water-conservation zone, and is an educational space for spreading awareness about environmental issues. Similarly, Yamuna Biodiversity Park of Delhi is an example of the successful restoration of barren land.

Kaikondanahalli Lake, which lies on the south-eastern periphery of Bengaluru, was severely polluted with sewage and solid waste. Following a newspaper report, the corporation planned to restore this lake with the support of groups formed of local residents, experts from engineering, education, ecology, etc. A year after restoration, over 50 species of birds and a great variety of butterflies, snakes, and frogs began to appear. There has been an enormous increase in animal and insect species since then.Regeneration of Bharatpur Bird Sanctuary in Rajasthan is also an example of the revival of a degraded ecosystem.

This article will briefly discuss the importance of restoration of insect habitats, which is currently untouched despite their tremendous potential and biological contributions in restoration of biodiversity in urban areas. The term ‘Biodiversity’is used to describe the enormous variety of life on Earth. It refers to all of the species in a particular region or ecosystem which encompass plants, bacteria, animals, humans and other living things.

Insects are critical to agriculture, human health, and bioresources because they play important role in cycling of nutrients, disperse seeds, pollinate plants, maintain soil structure, improve fertility, and control population of other organisms. Insects are at the base of the food chain, therefore their recovery is a prerequisite for the recovery of other species.

They provide various kinds of useful services which are described below:

Insects possess significant amounts of nutrients required by both humans and animals such as proteins, carbohydrates, vitamins, fibres, minerals etc. In South America, caterpillars, beetles, grasshoppers, and crickets are popular foods. Approximately $500 million worth of tinned silkworm pupae are exported from Thailand.

The pollination process of many flowering plants and crops relies on animals — primarily insects. Animal induced pollination is crucial to the production of the food we eat.

Insects also contribute to the breakdown of organic matter like fallen litter, corpses and animal faeces. This is important since it reuses nutrients, making them available for aerating the soil.

Some plants produce fruit and seeds that are eaten and collected by ants. They bring these seeds to their nests to eat and it is possible that some seeds are dropped along the way and others may be cached in the soil. These seeds may germinate and establish plants at a new location. Therefore, ants play a crucial role in the dispersal of fruit and seeds from plants. There are over 150 plant species that depend on insects for dispersal.

Similarly, honeybees pollinate and help plants grow, breed, and produce food. To keep the cycle of life going, bees transfer pollen between flowering plants. Most of the food we consume depends on pollination, particularly by bees: like almonds, apples, squash etc.

We also rely on insects for silk, dye, honey, wax and medical and genetic research.

It was once stated by EO Wilson, a noted biologist: “If all mankind were to disappear, the world would regenerate back to the rich state of equilibrium that existed ten thousand years ago. If insects were to vanish, the environment would collapse into chaos.”

An ecosystem is based on the coexistence of species and communities alongside the environment. The rivet popper hypothesis was proposed by Ecologist Paul Ehrlich to illustrate the consequences of species extinction on ecosystem. He compares key species to airplane rivets and claims that if those rivets were gradually removed, the plane would also crash. Similarly, if key species are removed from an ecosystem, their absence would eventually harm the ecosystem not immediately but in the long run.

There are many countries where pollinators have disappeared and people are forced to hand pollinate apples, pears and passion fruits, etc. Therefore, the loss of insects from the food chain would negatively impact human food supplies.

A recent study led by experts revealed that darkling beetle (indigenous to East Asia including the Korean peninsula) larvae are capable of decomposing plastic components by breaking them down at the molecular level. Researchers discovered that the larvae of the beetle in the order Coleoptera (Plesiophthophthal-musdavidis) can decompose polystyrene, which earlier was difficult to break down due to its unique molecular structure. Currently, there are more than 50 known species of plastivores, including the greater wax moth, providing hope for scientists seeking to reduce plastic pollution.

Thus, insects constitute a substantial part of our ecosystem but the number and diversity of insects are decreasing due to habitat loss, pollution, and climate change. Preservation and restoration of habitats that support insect diversity are essential to their conservation, otherwise many of these species will become extinct.

Therefore, every home, school, and local park should dedicate a portion of their lawn space as a natural habitat which would provide the insects a conducive environment. Pesticides and insecticides such as Neonicotinoids should be prohibited in local vegetation and green areas since they harm insect populations and mandate nature-rich development practices. Furthermore, artificial light at night can harm and kill many creatures including amphibians, birds, insects and plants. For example, most nocturnal insects are attracted to artificial lights that indirectly kill insects via exhaustion or through predation before dawn. Therefore, protecting dark night skies will benefit insect populations. Growing native plants provides more benefits to native insects due to their close ecological relationships. There are many insect species that depend on these plants for food and nesting sites and become prey for birds and other wildlife, so native plants indirectly attract numerous vertebrates. Insects’ conservation can richly benefit from insects-friendly environmental policies and political advocacy. Hence, we have numerous ways to conserve insects, and we can use any or all of them to slow insect declines.

It is imperative that we protect and preserve the insects’ world for a thriving future.

(The writer is a former IFS officer. The views expressed are personal.)