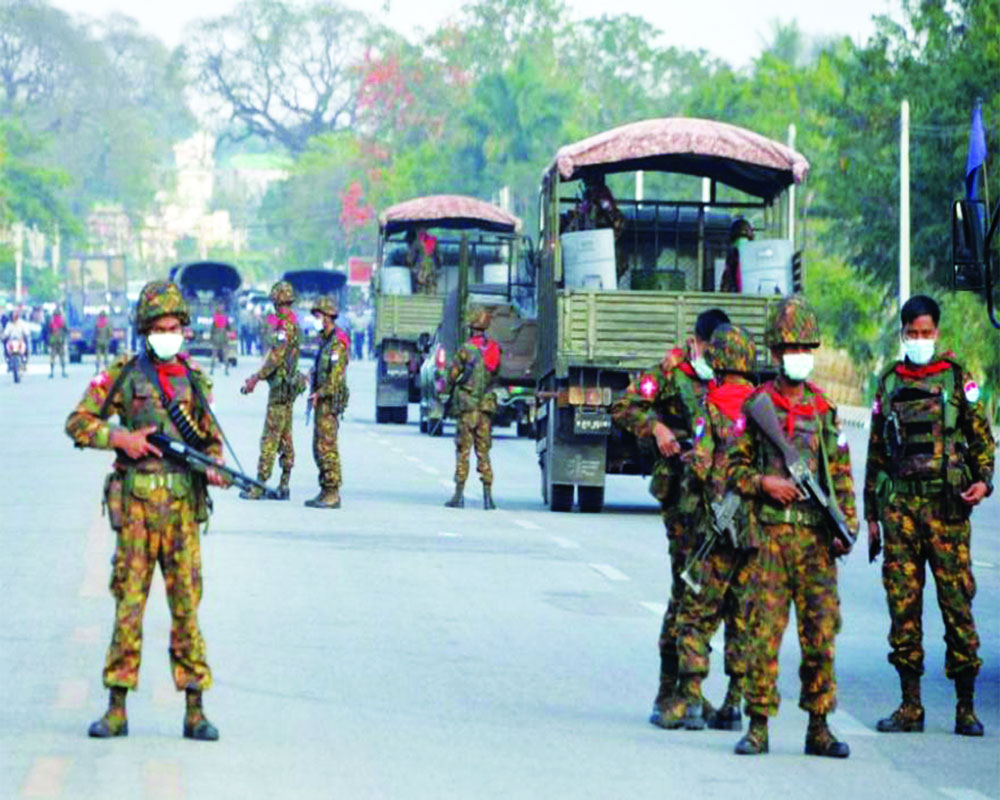 In his book, Coup d’Etat, Edward Luttwak says that the coup is a more widespread way of changing governments than elections. In Myanmar, it is the coup-maker, the military itself, which has rubbished “rigged elections” pledging to hold fresh elections in its vision of transition to a disciplined democracy — probably rule by military in civilian clothes, somewhat like the Thailand model. The coup is being contested by the youth — Generation Z — who are below 20 years and have grown up under democratic rule since 2011. They are remote-controlled by a leaderless Civil Disobedience Movement (CDM), linked closely to the Committee Representing National Parliament (CRPH) — the government-in-exile of recently-elected NLD lawmakers. Joining the alliance with fire power are at least eight Ethnic Armed Organisations (EAOs) who have broken the ceasefire. This combined resistance has forced the military to declare a unilateral month-long suspension of operations against the EAOs from April 1. Two months on, has the coup backfired?

On March 27, the Generals celebrated the Armed Forces Day when the single biggest carnage killed 114 protestors across 44 townships in Myanmar. Attending the parade was Col Ketan Mohite, the Indian Defence Attaché, among officers from Russia, China, Pakistan, Bangladesh, Thailand, Laos and Vietnam. The incumbent Army chief, Gen MM Naravane, was a Defence Attaché more than a decade ago, such is the geostrategic significance of Myanmar for India. Two days later, the Defence chiefs of Australia, Canada, Denmark, Germany, Greece, Italy, Japan, Netherlands, New Zealand, South Korea, the UK and the US issued a collective statement condemning the use of lethal force against unarmed people by the Myanmar Armed Forces. It urged the MAF to cease violence and work to restore the respect and credibility it has lost through its actions.

India finds itself on the wrong side of the fence not for the first time though our diplomats are confident they can navigate the situation, thanks to the lessons learnt in the 1980s and 1990s. They are forgetting that Myanmar 2021 is very different from those days when people were poor and malnourished; today, they have a present and future from the gains of democracy between 2011-2020. The CDM believes it is succeeding in denying control of physical space and economy to the junta. In the forefront of street mobilisation are women, confronting the police every day. The CDM is pitching a non-violent campaign that is being projected as a front-runner for the Nobel Peace Prize, 2022. It has attracted $7 mn worth of support from well-wishers.

If the fighting intensifies between the EAOs and junta, it would engage not only the military against unarmed internal resistance but also three main dissident armed groups in the border regions — Karens, Kachins and Arakanese (Brotherhood Alliance) besides possibly other EAOs. A multiple front engagement would stretch the military and lead to civil war. The UN special envoy on Myanmar, Christine Burgene, told the 15-member UNSC on March 31 that the military was not capable of managing the country and warned that the situation could worsen into a bloodbath. China’s muted criticism of the coup has led to anti-Chinese sentiment, resulting in 32 Chinese-owned factories being gutted. Beijing’s main concern is the security of the 770-km-long gas and oil pipelines worth $2.5 bn from the Yunan province to the Rakhine State as well as 38 projects linked to the China-Myanmar Economic Corridor. Beijing is also the lead player in the recent diplomatic moves between the junta and Asean.

Myanmar’s economy will soon be in tatters. The US sanctions have resulted in the suspension of bilateral trade and investment agreement, prevented the Generals from withdrawing $1 bn from the Federal Reserve Bank of New York and targeted Generals and police chiefs and their businesses. Next could be the Generalised System of Preferences (GSPs) under which 5,000 products carry zero tariff. Japan, which provides the biggest development assistance — $1.8 bn in 2019 — is transferring its business from military holdings to civilian companies. Whether combined resistance for the first time against the military results in the defeat of the junta is hard to tell. The Buddhist monks who led the saffron revolution in 2007 have not taken sides. India has taken a clear position: To not criticise the military for the coup but condemn violence against the CDM. This is not an ethical stance that India can sustain. But it has insurgency-related security interests along the border with Myanmar, strategic connectivity projects of its ‘Act East’ policy and Indo-Pacific strategy as well as concerns about China boosting its influence at India’s cost, especially when the military looks towards India to balance China. Given these conflicting interests, New Delhi has to appear, and be even-handed, in reaching out to the CRPH and Myanmarese people. The Generals require a face-saving exit, not a protracted urban conflict or civil war.