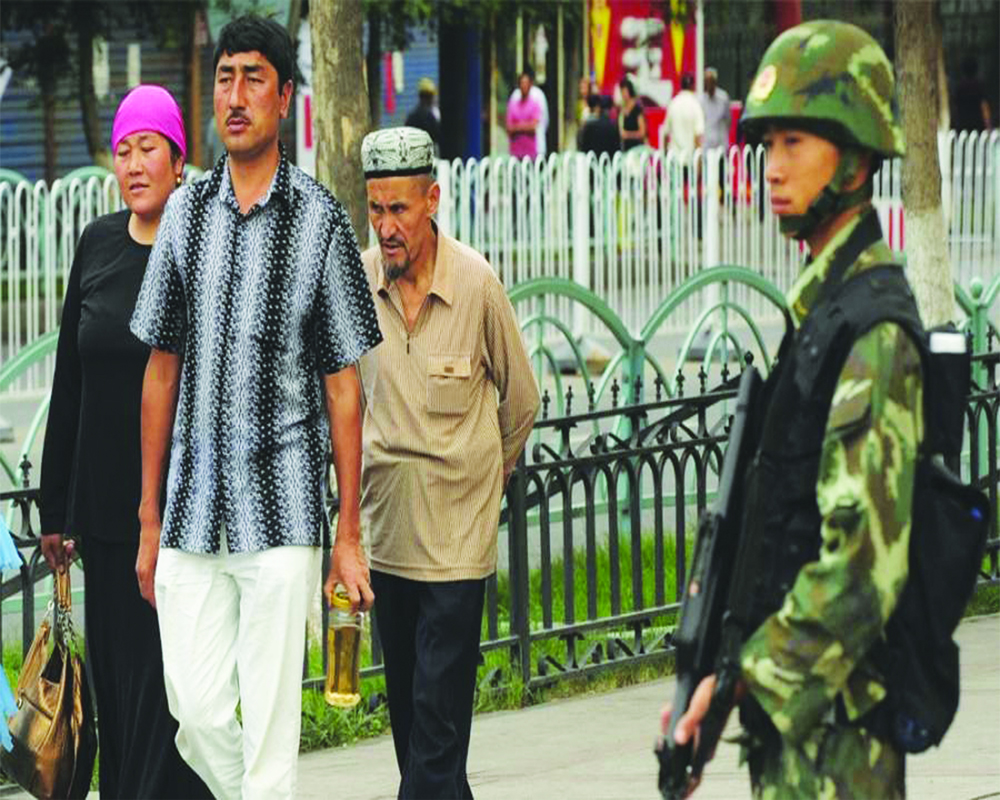 Xinjiang has become an Achilles hill for China. The indigenous Uighur people of this western province, the largest of the administrative regions of the People’s Republic of China (PRC), have had the history of discord with the authorities in Beijing as the strategically located Xinjiang borders with eight countries - Mongolia, Russia, Kazakhstan, Kyrgyzstan, Tajikistan, Afghanistan, Pakistan and India.

Uighurs are the Turkic-speaking Muslims and Islam is an important part of their life and identity. Importantly, they regard themselves as culturally and ethnically closer to the people of Central Asia than the people of mainland China and are one of largely persecuted Muslim minorities in Xinjiang, including Kazakhs, Uzbeks, Kyrgyz, and Hui. Though administratively, the region, known as Xinjiang Uighur Autonomous Region (XUAR), is autonomous like the Tibet Autonomous Region (TAR), its administrative control is purely in the hands of the Central Government. There are Uighur minorities also in China’s neighbouring countries such as Uzbekistan, Kyrgyzstan and Kazakhstan. And some of Uighurs are living in Australia.

The historic ties between Xinjiang and Beijing have been troublesome since the beginning of its accession to the PRC. The region had intermittent autonomy and occasional independence before it became an integral part of China in 1949. However, an East Turkistan State was declared before 1949, but it could not sustain and finally, the region had to be merged with the PRC, then under the iron rule of legendary Mao Zedong. But then a major fillip to the separatist movement came after the breakdown of the Union of Soviet Socialist Republics (USSR) in the 1990s.

Also, these movements received an indirect support from the rise of independent Muslim States across the Central Asian region. With massive crackdown from the Chinese State, the separatist movement and its leaders could hardly make an impact on the status of the province.

Why the XUAR is again turning into a boiling point for China?

Today, the Chinese state is all out to prevent the growth of Islamic terror in this restive province. In the name of fighting terror, the Communist State is creating complete paranoia among the locals. But many say that the ethnic tension brewing in Xinjiang is due to economic and cultural factors long aided by the authorities in the mainland.

The gargantuan development projects propelled by Beijing, both to eradicate poverty and to attract huge foreign direct investment (FDI), have brought a bunch of young and technically qualified Han migrants from eastern parts of China to the XUAR. And the central administrative authorities have specifically promoted the Hans so as to attract more of them to the Xinjiang province. This has fast changed the demographic scenario of the region. At the same time, the commercial and cultural activities of the Uighurs have been systematically curtailed by the Chinese State. This has fuelled tension between the local Uighurs and the Han migrants. Further the authorities have gradually increased surveillance and control over religious activities by imposing draconian restrictions on Islamic practices like fewer mosques and religious schools. Even the Government departments in Xinjiang have banned the Muslim civil servants from observing fasting during Ramzan. A report published by the Amnesty International stated that the authorities criminalised what they labelled “illegal religious” and “separatist activities” and clamped down on “peaceful expressions of cultural identity”.

This aptly demonstrates how Beijing has come up with severe measures both to control the assertion of the Uighur identity and to change the demographic structure of the province.

With the coming of Xi Jinping to power in 2012, the state agencies in connivance with Chinese Communist Party (CCP) officials are fast making the province a fortress. In this process, the central government is making several vocational training centres in the name of maintaining skilled workshops for the local Uighurs. But many activists across the globe say these are like concentration camps for torturing the Uighurs and punishing the erring elements. And China, denies all such allegations raised either by foreign governments or prominent human rights groups. China has often blamed the East Turkestan Islamic Movement (ETIM) and its followers for all sorts of violence and separatist activities carried out both in Xinjiang and in other parts of China. In 2013, a car ploughed into a crowd and burst into flames in the historic Tiananmen Square in Beijing. Even incidents of mass stabbing in Kunming and Yunnan Province in the past accompanied by killing of dozens by suspected Uighur separatists and their agents have alerted Beijing to spread a reign of terror over Xinjiang.

In fact, the separatists’ killing spree has spilled out of Xinjiang today. And this has fast becoming a serious concern for both the CCP and the Chinese state.

Therefore, this province of China is on the top agenda of both the domestic and foreign security agencies. The reasons are: first, the constant resistance coming from the local Uighurs; second, Islamic extremism that is gaining ground around the region; third, stability in the region is critical to the safe rolling out of the signature project of Xi’s prestigious Belt and Road Initiative (BRI) or One Belt One Road (OBOR); strategic crossroad for trade and investment in Central and South Asia, West Asia and further to entire Europe.

However, much more than all these, at the moment and even for future, Xinjiang is situated on the border areas of India’s Ladakh region. The eastern part of Ladakh became a disputed area between both India and China since the occupation of Aksai Chin in 1962 by the latter. And today, India’s border conflict with China that has been continuing in eastern Ladakh almost for a year has made the XUAR more strategically important, than the TAR, for Beijing.

So from this, it can safely be said that the political bosses in the Communist Party may tighten the security and mobility of people in Xinjiang more than ever.

Interestingly, China has been trying to impose strict security control across Xinjiang. Since 2016, Chen Quanguo, the Party Secretary for the XUAR, has dramatically enhanced the security apparatus of the province.

There has been a wide-ranging international campaign against Beijing for massive violations of human rights of the Uighur Muslims in this western province. Washington has officially declared that China is committing genocide and crime against humanity on the Uighur Muslims.

Just before Joe Biden took up the reins of the Presidential office, then Secretary of State Mike Pompeo said, “This genocide is going on…and we are witnessing the systematic attempt to destroy Uighurs by the Chinese Party State. Since at least March 2017, the local authorities dramatically escalated their decades long campaign of repression against Uighur Muslims and members of other ethnic and religious minority groups, including ethnic Kazakhs and ethnic Kyrgyz.”

The veracity and the scale of these intensive atrocities have confirmed as reported by the locals and some of the research organisations of global repute. In a report called “Sterilizations, IUDs, and Mandatory Birth Control: The CCP’s Campaign to Suppress Uighur Birth Rates in Xinjiang” released by the Jamestown Foundation, based in Washington in June 2020, says, “Natural population growth in Xinjiang has declined dramatically; growth rates fell by 84 per cent in the two largest Uighur prefectures between 2015 and 2018 and declined further in several minority regions in 2019. In 2020, one Uighur region set an unprecedented near-zero birth-rate target: a mere 1.05 per mile, compared to 19.66 per mile in 2018. This was intended to be achieved through family planning work.”

It has been found that intrauterine contraceptive devices (IUD), sterilisations and forced family separations came into force since a sweeping crackdown started in the region in the later part of 2016.

Thus, Xinjiang has become a draconian police state. The local witnesses account of intrusive state interference of the state into the reproductive autonomy of the Uighurs and other minority groups in the XUAR. And this kind of a practice has become ubiquitous across the region. The Uighurs feel that one fine day all will be exterminated from their homeland.

Recently, a legal opinion has been published in Britain. And it has also clearly claimed that Beijing is carrying out the crime of genocide against the Uighur Muslim people. Thus international pressure is mounting against China today. Will Xi regime listen to all these? Of course not, for now. However, the best such concerted effort must come from international organisations such as the UN, top human rights agencies and all the big Western nations.

China’s growth is not detrimental to the global economy, but it must be ensured that it stays in the international arena a law-abiding nation. The Uighurs must be saved from physical elimination at best by the Chinese state. They all have the right to live the way they want. Their basic rights and freedoms must be restored and respected by Beijing. Else more resistance will grow for sure from the Uighur community.