What made the dragon stop spitting fire?

What made the dragon stop spitting fire? 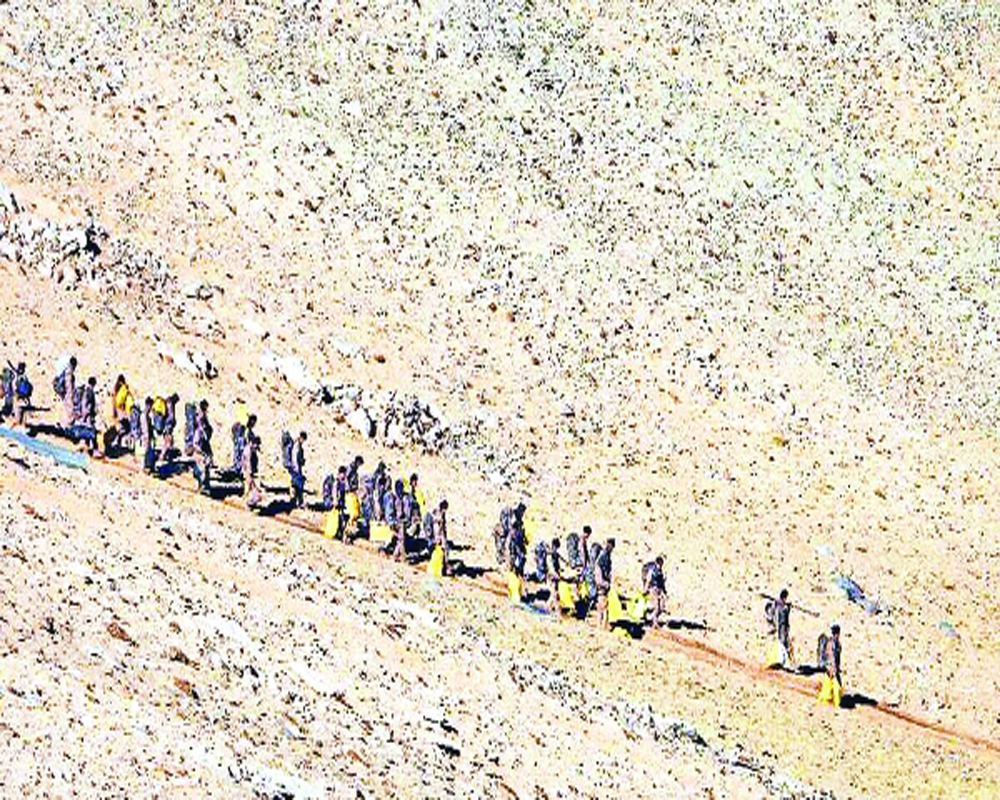 The agreement reached between the two Asian giants to ease tensions on the Line of Actual Control (LAC) took many by surprise. The implementation began on February 10 with phased withdrawal from the north and south banks of the Pangong Tso Lake, a major area under dispute being referred to as the “friction point” by both sides. The entire process, including the removal of infrastructure created after April 2020 and vacating of heights occupied by infantry units is likely to take 10-15 days as the exercise is being undertaken in an atmosphere of utter trust deficit between the two sides. A strict and foolproof verification mechanism has been put in place to avoid the incidents of the past which led to a deadly clash between the two sides at Galwan in June 2020. After the disengagement process is successfully completed in this sector, the commanders are scheduled to meet within 48 hours to discuss the modalities for disengagement in other sectors.

While a majority at home and abroad are happy with the possibility of normalcy returning along the LAC, there are many who are blaming the Government for ceding Indian territory in Eastern Ladakh to the Chinese. Some veteran officers have said that the Government has virtually accepted the 1959 Chinese claim line and questioned the logic of having a buffer zone and our troops vacating the heights occupied on the Kailash Range. Many of the doubts have arisen because of China’s duplicitous and treacherous behaviour.

Nonetheless, credit needs to be given to the Indian negotiators, both military and diplomatic, for their perseverance, patience and persuasion as they refused to be fatigued by the prolonged negotiations, a tactic used by the Chinese to tire and wear down the adversary.

Credit also goes to the valiant Indian Army and its field commander who turned the tables on the Chinese through a brilliant tactical manoeuvre to outflank the People’s Liberation Army (PLA’s) troops on the north bank by occupying tactical heights on Kailash Range on the south bank on the Indian side of the LAC. It enabled the negotiators at all levels to undertake tough talks without conceding to the solutions offered by the Chinese.

Xi Jinping is an astute politician who is an expert in the art of survival. Xi would prefer to relent to India than to bow down or surrender to his adversaries at home. The internal situation in China is not good and Xi’s adversaries are breathing down his neck. The growing resentment among the masses is also affecting the popularity of the Chinese Communist Party (CCP). Xi has centralised all powers and this works well as long as the going is good. But the worsening internal situation has given rise to many dissenters within the party and other political opponents. This and the dashing of hopes of improved relations with America post Donald Trump have played a major role in reaching the agreement after a standoff extending nearly for a year. Xi has enough problems at home and the continued impasse with India was harming the country’s national interests, including the economy, which probably made the Dragon relent.

The first and the most compelling reason was the realisation by Xi that the Chinese have bitten off more than they could chew. The Chinese belligerence and expansionism was for the first time opposed strongly everywhere after the Indians had shown the way by refusing to get bullied and giving in to Chinese hegemony. The determined response by India acted as an elixir for other victims of Beijing’s expansionism in the South and East China seas, across the Taiwan Strait and the Indo-Pacific region. The Chinese calculation of taking advantage of the ongoing pandemic (which is alleged to be of Chinese origin) misfired very badly. Chinese resources were not only overstretched but fatigued, thus exposing the fragility of its armed forces in a combat situation.

The Chinese troops were found wanting as far as fighting in super high altitudes is concerned. They were unable to bear the vagaries of the hostile weather and the extreme wind chill factor which makes survival at these heights extremely difficult. The emphasis in the PLA has been to fight in a digital environment, avoiding contact battles, least realising the logistics and physical problems of a super high altitude warfare. Thus, the morale of the PLA soldiers was in their boots despite claims of providing them with centrally-heated habitat.

Indian soldiers on the other hand beat their adversaries hands down and were seen to be by their counterparts as a very agile, alert and aggressive force. Conscription in the Chinese Army and their young soldiers being the product of the one-child norm, was another contributory factor. There was tremendous pressure back home from their parents and PLA veterans to pull back from the area. The other major problem faced by China was the failure of the domestic consumption market to pick up momentum. Though the Chinese Gross Domestic Product (GDP) has remained positive its attempts to shift from a manufacturing-driven economy to a consumption-driven one has not yielded the desired results. China’s consumption, a key driver of growth,  has dampened the hopes of revival amid fears of resurgence of the Wuhan pandemic. Retail sales are still slow, displaying a lack of confidence among the masses.

The disengagement has been timed to revive the spirits before the Chinese New Year celebrations begin. That China can ill-afford tensions it has acquired globally through its revisionist policies, seems to have been realised by Xi.

The external factors that may have contributed to Chinese disengagement are the Indian revival story and certain pronouncements of the new US President Joe Biden.

India’s bounce back from the pandemic has taken Beijing by surprise as it was among the few nations to develop four vaccines. This dashed the hopes of the Chinese leadership, which had envisioned the collapse of the Indian economy and its consequent weakening as a regional power. Instead, India’s economic revival and growing soft power through “Vaccine Maitri” has ruffled many feathers in China.

Another reason attributed to the prolonged negotiations was the Chinese desire to wait and watch the way things unfolded globally after the presidential elections in the US were completed. Contrary to Chinese expectations, despite the change in presidency the new POTUS is as aggressive against China as his predecessor. The new US administration has not only openly supported India and cautioned China against its growing expansionism, it has also promised to strengthen the security alliance with Japan to counter the increasing Chinese threat in the region.

The US has accused China of bullying and attempting to build a “maritime empire” in the South China Sea. It announced several rounds of sanctions on Chinese State companies involved in building artificial islands there. To the Dragon’s dismay France, EU, Great Britain and Australia have also joined hands with the US to curb China’s expansion.

All in all, a process has begun with a ray of hope that normalcy would return soon along the troubled LAC, the de facto border between the two Asian giants. It’s just the beginning and the successful completion of this phase would pave the way for  subsequent disengagements in other disputed sectors. That would lead to ultimate de-escalation without which peace cannot prevail. India can ill-afford to let its guard down and hence there should be no let-up in its 24x7 surveillance and preparation for an inevitable war with China.