Why Modi does not repeal the farm laws

Why Modi does not repeal the farm laws 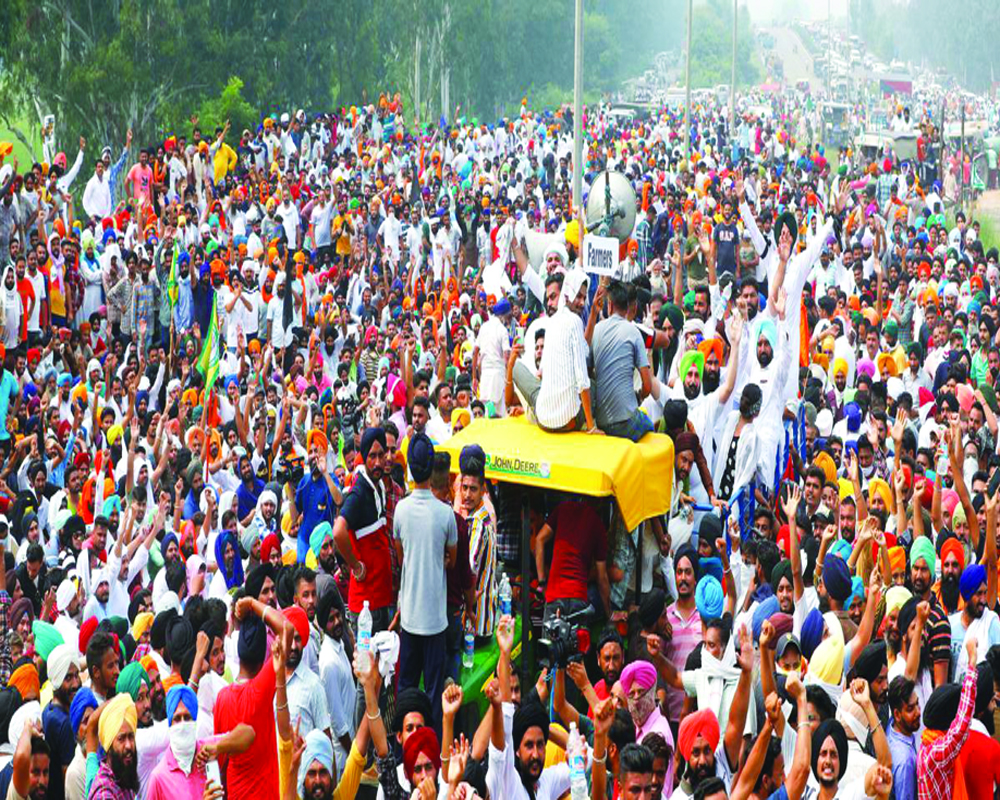 The farm laws will open up multiple options for farmers, enabling them to realise a price of their choice which could be even more than MSP

Even as Prime Minister Narendra Modi has demonstrated resilience while navigating other reform measures, he has refused to budge on the three farm laws despite the nearly 10-month-long protest by farmers demanding their repeal.

The “Situation Assessment of Agricultural Households and Land and Livestock Holdings of Households in Rural India”, SAS in short,released by the National Statistical Office (NSO), covering the period July 2018 to June 2019, reveals widespread dissatisfaction among farmers with the price realized from sale of their produce; it varies depending on the commodity. The shares of farmers dissatisfied are cereals — 25 per cent, fruits — 28 per cent, pulses — 32 per cent, oilseeds — 35 per cent, vegetables — 44 per cent, tuber crops — 47 per cent, flower crops — 84 per cent.

The Survey also brings out the level of dissatisfaction amongst farmers - mainly due to shortfall in price realization -depending on who the buyer is. The latter are placed in eight broad categories. These are Agricultural Produce Market Committee or APMCs (these are mandis - a nickname for marketplace notified by the State Governments under their APMC Act), private local market, Government agencies, cooperatives, farmers producer organizations (FPOs), purchase by firms under ‘contract farming’, private processors, input dealers.

The low price realisation from sale in APMC has to do with what may be termed as ‘strangulation of farmers on this platform’ under the extant arrangements. Put simply, the farmers in a given area are required to bring their produce to the ‘designated’ mandi. They cannot take it to any other place even within the same state. If, any farmer does this, she or he runs the risk of violating the law.

On entering the mandi, he faces two sharks; one, the arthiyas - local term for commission agents who arrange for the auction and delivery of the produce to the buyers - and two, the licensed trader at the mandi who alone is authorized to buy the produce. They collude with each other to ensure that the farmer faces a deadly cocktail of low price, rejections,weighing less, delayed payment, etc.Levies such as market fee of three percent, arthiyas’ commission 2.5 percent and rural development cess (RDC) three percent (as in Punjab) further add to their woes as these come out of farmer’s pocket only.

Come to the local private market. Why is the farmer not getting a good price here? This too links up with prohibition on sale outside the mandi. If, the law of the land were to be followed in letter and spirit, there cannot be any sale outside the notified place (read: mandi). Yet, de facto,it is happening on a massive scale.

This has to do with collusion between the traders/commission agents and corrupt bureaucrats and politicians. While the former force the hapless farmers — especially small farmers who don’t have access to APMC markets — to part with their produce at throwaway prices (as they have no other place to go), the latter who have the responsibility of enforcing the rules look the other way. If a farmer dares to sell to anyone other than this cartel (read: traders/commission agents), he is scared away saying ‘he could be booked’ for violating the law.

Clearly, an overwhelming percentage of farmers — 83 per cent —selling in the mandis and local market get a raw deal fundamentally because they are shackled by APMC laws. The only way they can get a fair deal is to unshackle them by amending these laws to make way for selling (albeit legitimate) in the private market.Yet, majority of the State governments have not done it.

The Modi Government responded to this dire need by enacting The Farmers’ Produce Trade and Commerce (Promotion and Facilitation) Act, 2020 along with two other supporting laws namely, The Farmers (Empowerment and Protection) Agreement on Price Assurance and Farm Services Act, 2020 and The Essential Commodities (Amendment) Act, 2020. These laws legitimize sales on all non-APMC platforms without disturbing APMC mandis (these anyway are within the jurisdiction of the States) while fully safeguarding farmers against any wrongdoing by the buyers.

The farmers can sell to a buyer of their choice and get the ‘intended’ price. If, a farmer feels he will not get a good price by selling to a non-APMC outlet, he can shift to the APMC and vice versa. The laws have the potential to transform their lives from one of doing business under subjugation — like a caged parrot and contending with what the owner of the cage gives them - to one where they are their own masters fully empowered to sell on their terms.

Yet, if the farmers do not want these laws, this will throw any logical mind into a state of bewilderment. They also want a minimum support price (MSP) - for every grain they sell - guaranteed by law. This demand is even more bizarre. It is utopian and won’t ever see the light of the day - irrespective of whether the central laws are repealed or permanently stayed.

If the laws are repealed, then farmers’ access to non-APMC platforms gets barred. When, there are no takers of the produce, any talk of guaranteed price is meaningless. Even if the laws stay enabling access to those platforms, then also,given the risk of going to jail (in case, payment is less than MSP) which trader will dare to buy?Do they want the Government to buy?

Already, it is buying through its agencies such as the Food Corporation of India (FOCI) for meeting the requirements of the Public Distribution System under the National Food Security Act. Even at the current procurement level, FOCI and others do not have space to store and capacity to handle. Think of the nightmare if the agencies were to buy, handle, and store all that the farmers offer.

Look at food subsidy. At current purchases, during 2020-21,the Government spent over Rs 500,000 crone. Now, if the Centre were to agree to what the farmers want, it will end up spending all of its revenue on supporting them only. From where will it get resources for all other activities like law and order, general services, welfare, infrastructure, and development?

The only ‘logical’ and ‘practical’ way forward is to stay with the three laws sans legal guarantee for MSP. These will open up multiple options for farmers enabling them to realize a price of their choice which could even be more than MSP. However, farmers’ leaders do not accept this. How do we come out of the logjam?

The key is with the Supreme Court. In January 2021, it had stayed implementation of these laws. It had also set up a committee which submitted its report in March 2021. It should give its verdict ‘urgently’ on what is ‘right’.