Nandigram recount was stopped at gunpoint, will move court: Mamata

Nandigram recount was stopped at gunpoint, will move court: Mamata 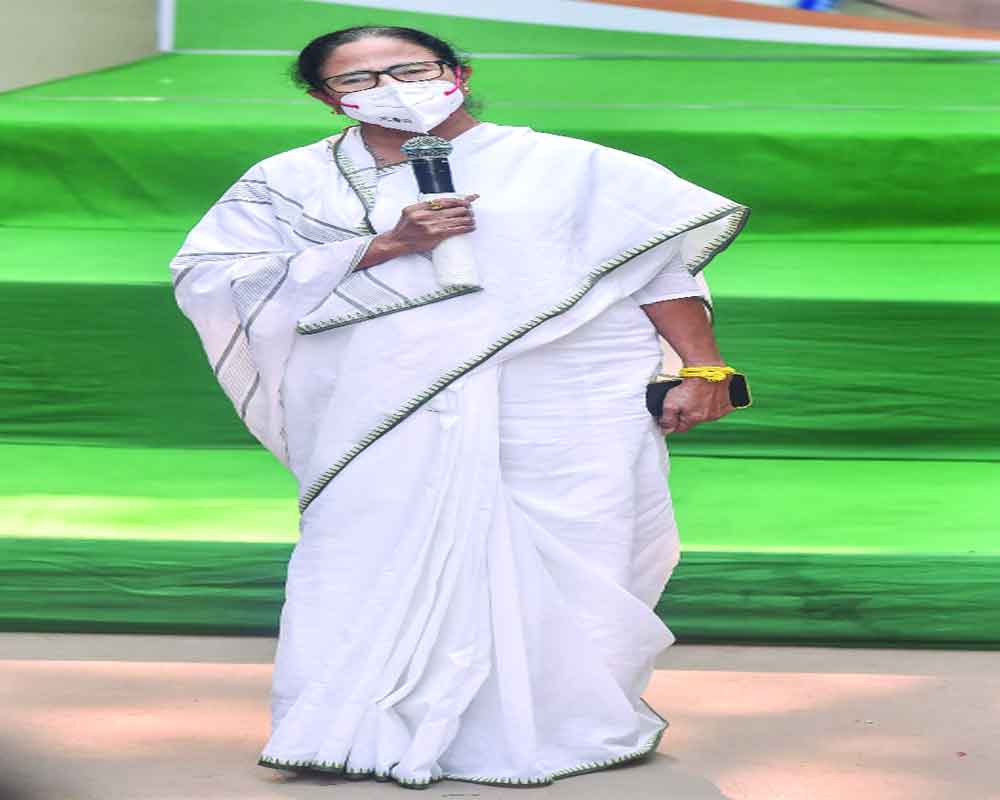 The people of West Bengal had put the rulers of Delhi in their place by handing them out a stunning loss in the Assembly elections and this “proves that the BJP is not a shahenshah,” Chief Minister Mamata Banerjee said.

Mamata  will take oath for the third time in a row as Bengal Chief Minister on May 5, senior party leader and Minister of the outgoing State Cabinet Partho Chatterjee said after the TMC  Legislator party  on Monday unanimously elected her as the Leader of the TMC Legislature Party.

She alleged the BJP had misused the poll body to defeat her but failed, “thanks to the people of Bengal”.

Refusing to let her anger on the Election Commission die down, Mamata complained how the counting of votes at Nandigram was manipulated at gunpoint to ensure that she lost by a wafer-thin margin.

“I have an SMS with me… it was sent by someone... it said the Returning Officer of Nandigram was forced not to order a recount at gunpoint… he said he had risk his life and family if he ordered a recount… But I will not take it lying down. I will move the court and definitely tell all the officials to preserve the VVPAT and other papers,” she said.

Mamata said, “Bengal was saved from ruination (because) the spine of the people was straight. This is a victory of democracy… Bengal has decimated the ego of BJP.”

In a significant statement --- that experts linked with her hidden national agenda --- the Chief Minister asked the Centre to provide, “free vaccine for all,” failing which she threatened a prolonged movement.

“I am requesting the Centre to allocate a fund of Rs 30,000 crore for providing free vaccine to all … if the Centre fails to do that then I will be forced to start an agitation at the Gandhi Statue,” said Mamata, adding controlling the pandemic was her first priority. She asked her newly elected MLAs to move into their constituencies and help the people out.

The Chief Minister who targeted the Election Commission for conspiring with the Opposition BJP to plan her defeat at Nandigram, a seat that she lost by a meager margin of 1,953 votes, also expressed unhappiness at not getting a congratulatory call from Prime Minister Narendra Modi.

“I have received telephone calls from all the senior leaders like Udhab Thackery, Navin Pattanaik, Amrinder Singh, Akhilesh Yadav, Sharad Pawar, Rajnikanth, Hooda, but no call came from the Prime Minister,” said Mamata, adding quickly that “he might be busy with his other engagements.

Curiously a day after Union Ministers Nirmala Sitharaman and Rajnath Singh congratulated Mamata for her victory, their ministerial colleague Babul Supriyo tweeted that he would not like to do the same as people of Bengal had done a historical mistake.

“Neither will I congratulate Mamata... nor do I wish to say I ‘respect’ the people’s verdict... sincerely think people of Bengal made a historic mistake by not giving BJP a chance... by electing this corrupt, incapable, dishonest government and a cruel lady back to power,” he wrote.