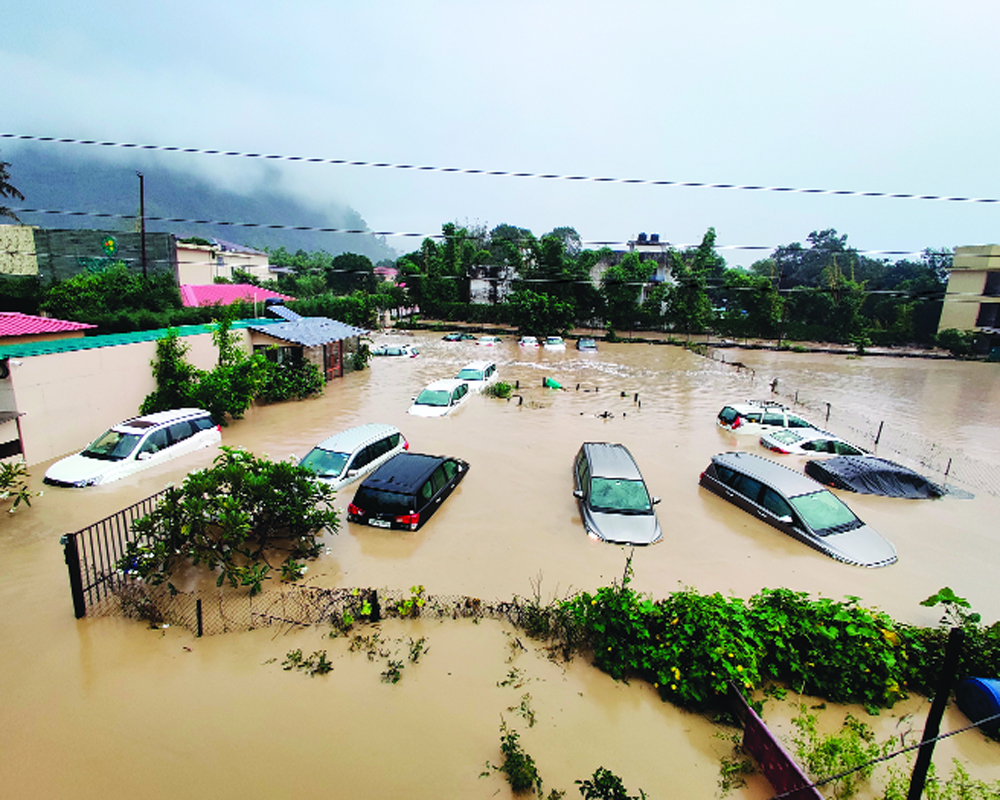 Heavy rain wreaked havoc in many parts of Uttarakhand for the second consecutive day on Tuesday killing at least 42 people in Kumaon region as several houses collapsed, taking the toll due to rain-related incidents in the State to 47. Uttar Pradesh witnessed four fatalities, even as heavy downpour in Kerala filled several dams to the brim and multiple districts were on alert.

Twenty-eight people were killed in Nainital district, six each in Almora and Champawat, and one each in Pithoragarh and Udham Singh Nagar districts, the official said. Around 100 people stranded at the Lemon Tree resort on the Ramnagar-Ranikhet route after water from a swollen Kosi river entered the resort were later evacuated to safety.

Electricity, telecom and internet connectivity in Nainital remained badly hit throughout the day.

As per the information given by the State emergency control room, eight people are reported missing while many have suffered injuries.

The rainfall in many places of Kumaon broke all previous records. Scores of roads in different parts of the State are blocked due to landslides and some of the important bridges have suffered damage. The rail connection between Lalkuan and Kathgodam has been severed due to a breach of bridge on Gaula River in Haldwani.

All the major rivers of the State are flowing above the danger mark and low-lying areas in different parts of the State have been inundated with water.

Concerned over the fury of nature, Prime Minister Narendra Modi called Chief Minister Pushkar Singh Dhami over phone and assured every possible help to the State.

Dhami visited the disaster-affected areas of the State and also conducted an aerial inspection of many areas. He was accompanied by the Disaster Management Minister Dhan Singh Rawat and other senior officers. Nainital district was the worst-affected in the State as 18 people were reported dead in different incidents. In this district, five people are reported missing.

In Ramgarh area of Bhawali Tehsil of Nainital, cloudburst triggered a landslide due to which a retaining wall fell over some huts of labourers.

Nine people died while one was injured in the incident. Five people were reported dead in the Totapani village of Mukteshwar in Nainital district.

In view of the incessant rains, Dhami reiterated his appeal to Chardham yatris to stay where they are and not to resume their journeys before the weather improved.

With 23 rain-related deaths on Tuesday, the State’s toll rose to 28, according to the State Emergency Operation Centre (SEOC), which also said the Kumaon region was the worst-hit.

Five deaths were reported on Monday.

Director General of Uttarakhand Police Ashok Kumar, who accompanied Dhami on a visit to the rain-hit areas of the Kumaon  region, said roads, bridges and railway tracks have been damage in Kathgodam and Lalkuan in Nainital and Rudrapur in Udham Singh Nagar.

It will take at least four-five days to repair the damaged tracks, Kumar told PTI.

Three Indian Air Force (IAF) helicopters have arrived in the State and are assisting in relief and rescue operations. Two of them have been deployed in Nainital district, which has suffered extensive damage due to cloudbursts and landslides, Dhami said.

According to a rough estimate, around 100 pilgrims from different parts of Gujarat who had gone to Uttarakhand for the Chardham Yatra were stranded following heavy rains and landslides, Gujarat Revenue Minister Rajendra Trivedi said.

The National Disaster Response Force has rescued over 300 people from flood-affected areas of Uttarakhand, the federal force said on Tuesday. The NDRF has deployed 15 teams in the State.

Meanwhile, heavy rainfall was reported from other parts of the country as well including

Bihar, West Bengal, Odisha, Madhya Pradesh, Tamil Nadu, according to the IMD, which forecast an intense spell of rain over east and northeast till Wednesday, and south peninsular region during next four-five days.

A 35-year-old woman and her mother-in-law died in Uttar Pradesh’s Fathepur after a wall of their house collapsed following heavy rains. In Bareilly, also in UP, two labourers died of electrocution in Bisalpur road after coming in contact with a solar panel following heavy rains, police said.

In West Bengal, the Met Department said heavy rainfall is very likely to continue till Thursday morning even as the low-pressure system that developed over the Gangetic Basin in the southern part of the state moved to Bihar, parts of which received heavy rains during the day.

The weatherman warned of extremely heavy rainfall over Darjeeling, Kalimpong and Alipurduar till Wednesday morning and downpour till Thursday over all sub-Himalayan districts.

The IMD forecast more rain on Wednesday in Odisha, which has already been battered by low-pressure area-induced downpour for the last three days. Fishermen were advised not to venture into the Bay of Bengal for the next 48 hours.