Sink your differences to overthrow saffron regime: Didi to Opp

Sink your differences to overthrow saffron regime: Didi to Opp 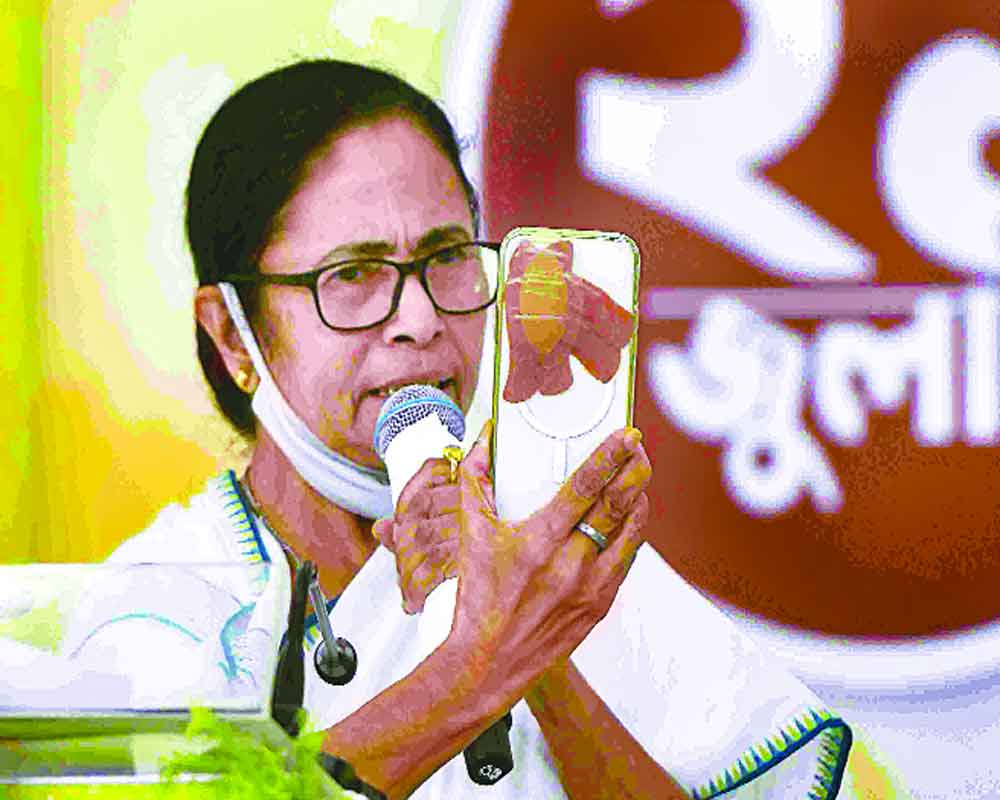 In a speech matching her national aspirations, Bengal Chief Minister Mamata Banerjee on Wednesday urged the national leaders of all Opposition parties to sink their differences and mint an anti-BJP coalition ahead of the 2024 general elections to overthrow the “divisive, anti-poor and pro-rich” saffron Government.

“BJP carries bigger load of virus than the corona” that was aiming at finishing the three democratic pillars “elections, judiciary and media,” she said.

“I ask all the national leaders from all the States to make a Front and start working on a plan well in advance to overthrow this anti-people Government from the Centre. … there is no point starting late because calling the doctor after the disease has set in makes no sense,” Banerjee said. She was delivering a nationally-aired speech on the occasion of Trinamool Congress martyrs’ day.

Banerjee who was likely to go to Delhi later this week said she would appeal to the leaders like Sharad Pawar to arrange for meetings where all the parties could be taken on board.

Speaking about at the alleged connection between the Pegasus spyware and the powers that be at the Centre, the Chief Minister said, “This Government has accumulated Rs 3.7 lakh crore by raising oil prices … instead of using that money for the people of the country … they are indulging in ‘Spygiri’… they are changing India from a democratic State to a surveillance State … this is not acceptable.

“They tapped the mobiles of PK (poll strategist Prashant Kishor ), Abhishek (Banerjee) because I often needed to speak to them. I must assume that my mobile definitely gets entangled …They are not only tapping the talks of the Opposition leaders, the judges, the media, but also taking the pictures through this software, Banerjee said appealing to the Judiciary to intervene and save the country.

“What is it that I cannot speak to Mr Chidambaram or Mr Pawar or the Delhi Chief Minister or Telangana and Odisha Chief Minister … how is it that we cannot hold our private conversations for the fear that our phones are being tapped,” she said.

“It is my humble appeal to the Supreme Court to please take suo motu cognisance of the case … Everything is being recorded…please save the country … either by taking suo motu cognisance or setting up an SIT under judicial surveillance to get to the bottom of this all,” Banerjee said adding “only judiciary can save the country because they are recording everyone’s private talks and in the process they will blackmail them into silence.”

The TMC had organised a country-wide airing of the Chief Minister’s speech putting up giant screens in States like Uttar Pradesh, Gujarat, Tamil Nadu, Jharkhand, Punjab etc. Banerjee said a similar attempt in Tripura was,however, forcibly foiled by the BJP Government in that State. A special arrangement was made at the Constitution Club in Delhi for the national leaders of all the parties to assemble and listen to the speech. Among the leaders who attended the meeting in the Capital were Congress’ P Chidambaram, NCP’s Sharad Pawar, SP’s Jaya Bacchhan, RJD’s Manoj Jha, Shiv Sena’s Priyanka Chaturvedi. There were representatives from DML, TRS and AAP too.