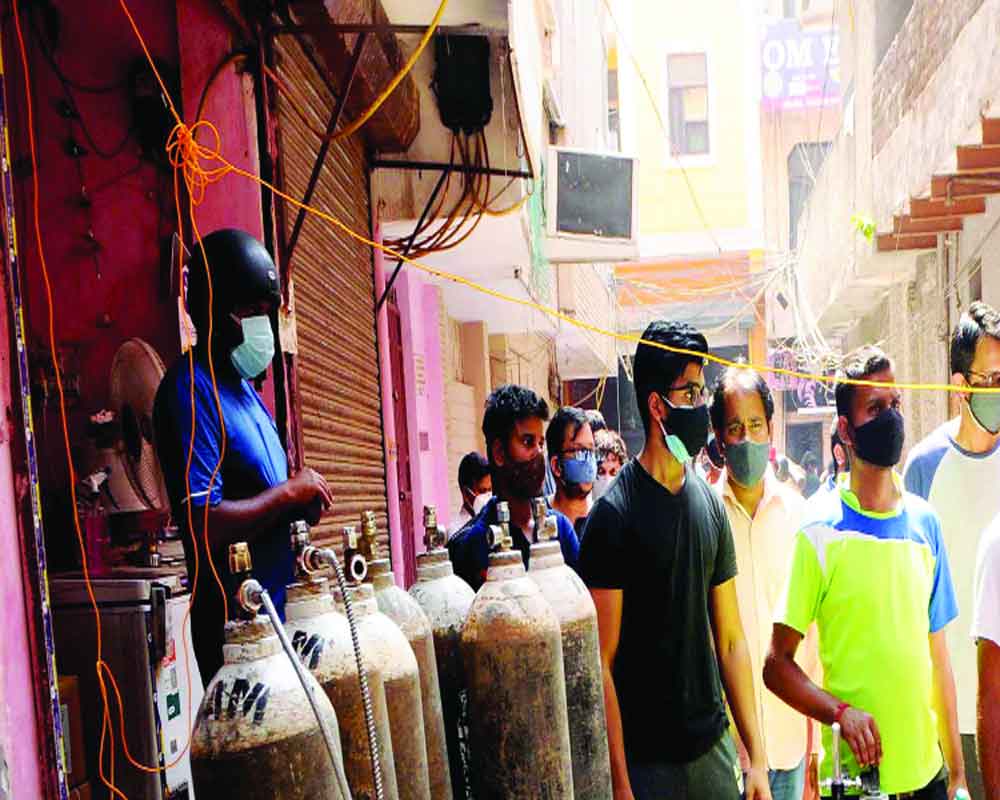 Delhi is choking, as are Mumbai, Lucknow and other cities, struggling for oxygen in the middle of the pandemic. So much so that the perception is people are dying due to lack of oxygen and not due to COVID-19. MUSBA HASHMI speaks with doctors and experts to somehow fathom a way out of this unprecedented and fatal crisis

Delhi is struggling to breathe. Deaths have become younger, more frequent and unabated. Oxygen has all but vanished from cylinders, suppliers, hospital ICU pipelines and people are dying gasping for a breather from the pandemic’s second wave.

From being a success story, the nation has become a cause of concern globally with fast rising casualty and total collapse of not just medical infrastructure but all other support systems, helmed by an unprecedented oxygen supply shortage in the Capital.

“The reason behind the oxygen crisis in Delhi is plain and simple that even though we knew that the second wave is coming, we knew it from the last century that the second wave of any disease was much more widespread and deadlier, we did nothing. And we had seen it coming in Europe, UK and the US and then in our country too  with the massive vengeance, but still we did not get ready and we did not apply our minds. The Government had sanctioned 160 pressure swing adsorption oxygen restoration plants out of which eight were to be in Delhi. The Government had sanctioned these plants, the funds had been released. But we have to ask why these plants were not commissioned, who sat on the process and was behind the delay. We did not secure our oxygen supply lines, we did not secure our plants. That is the main reason. The second reason is, of course, that the supply is shot up by, at least, 10 times compared to what the demand was earlier,” Dr Shuchin Bajaj, Founder Director, Ujala Cygnus Group of Hospitals, says.

However, even if the demand shot up, the process should have been amped up too.

“This scarcity would have been justified if it was for four-five days, we could have understood that the supply chains were getting stressed. But it has continued for almost 15 days and there is no hope that it is going to get solved anytime soon. And it’s not just in Delhi, it’s in all the Northern States. Most hospitals are working at lesser capacity, because the doctors are scared of admitting patients because they don't know when and where their next supply of oxygen is coming from. If oxygen is assured, I am sure the scarcity of beds will be ameliorated to a great extent because hospitals will admit more patients. However, they need to be assured that oxygen is readily supplied and that they will not run out of oxygen,” Bajaj tells you.

Dismissing the claims, that there is unnecessary panic and hence, the shortage of oxygen, he says, the panic is justified given that a life source is out of stock.

“Not to mention, oxygen is the life source of any patient who’s suffering from a lung illness and Corona affects your lungs badly. So, if oxygen runs out, anyone will panic. There is no other way that these patients can be saved in the absence of oxygen and patients are dying in hospitals in Delhi. The figure of 25 patients dead in Jaipur golden and another 25 in Sir Ganga Ram Hospital is just the tip of the iceberg. There must be many others who have died because of low pressure of oxygen or unavailability of oxygen, which has not got media attention just because of the fact that it didn’t happen in the big hospitals. Many people are dying in their houses, on the roads and in ambulances because of lack of oxygen. So, this panic is definitely justified because people are dying. There is no excuse for that it is not justifiable at all, that we are allowing people to die just because we cannot arrange oxygen for them. It’s a shame,” he asserts.

However, it is not as if we can pick and choose people to blame. Experts say everyone is to be blamed here, especially the politicians, administrators and the lawmakers.

“Everybody is to blame here. Especially the administrators, the politicians, the lawmakers and the policymakers. More so, because we knew what was going to happen and still we did secure enough supply lines. It is sad. So I think each and every person in the ecosystem is to be blamed. They have to share some part of the blame,” Bajaj says.

Dr Aashish Chaudhry, Managing Director, Aakash Healthcare, Dwarka, tells that Delhi does not produce medical oxygen and hospitals in the city are entirely dependent on neighbouring and other States for oxygen supply.

“When the requirement of oxygen started to increase due to the unique complications arising in the second wave, many of the neighbouring States prevented oxygen produced in their state to be transported to Delhi. The bureaucratic tangle of negotiations takes time but in ICUs and emergencies, a moment’s delay can cost a life — the Governments may have been trying to resolve the situation while patients’ lives were at risk,” he says.

The unique complications, he says, in the second wave is one reason behind the panic — many of the atypical symptoms are occurring for the first time in many patients, which can be misleading if not cross-checked with test results. “Since the strain this time is seemingly more infectious, many of the lab technicians are getting infected which is affecting the turnaround time for RT-PCR test results. The Rapid Antigen Tests (RATs) don’t have the high sensitivity of RT-PCR. Even the RT-PCR results are misleading in many cases where infection can be detected only through a CT scan — the damage has been done by then. Then there is happy hypoxia — oxygen levels start dropping suddenly and fast and the prevailing oxygen crisis makes it difficult to provide the person with what they need at that juncture,” Chaudhary says.

He says India’s historic lack of focus on building healthcare infrastructure and substantial budgetary allocation for several decades is to be blamed for this crisis.

“The Government’s decision to establish captive oxygen plants in hospitals is a long overdue move, we welcome it wholeheartedly. Besides, a surveillance, monitoring and evaluation system must be set up to create a system of warning and assess the state of preparedness, so that we can prevent people from dying due to lack of oxygen supply,” he adds.

Not only this, but the unnecessary hoarding of oxygen concentrators coupled with the surge in moderate to severe COVID-19 cases has led to the shortage of oxygen supply.

“There is an absolute surge in the number of new covid cases over a very short span leading to the strain on healthcare in India. Also there has been increase in number of cases who present with moderate to severe COVID-19 disease. These are the patients who need oxygen therapy. There is significant chunk of patients in hospital who are either on high flow or HFNC system which consumes a large volume of oxygen. This has resulted in huge surge in oxygen demand in hospitals. Many people out of panic are buying oxygen concentrators. Combination of both has led to shortage of oxygen. Many people are hoarding oxygen and it’s high time Government take these people to task,” Dr Arunesh Kumar, HOD, Paras Chest Institute & Senior Pulmonologist, Paras Hospital, Gurugram, says.

He adds that oxygen is a medicine which is prescribed to a particular patient. Using oxygen if you don’t need it, is harmful to your body.

Bajaj warns that the Government and the hospitals both need to be very careful of the possible third wave coming in.

“We should learn from this crisis and shall ensure that we have secured all our supply lines for future. Last year, it was PPE kits and masks, this time it is oxygen. So next time it may be something else that falls short and that we fail to anticipate, and then it will be easy to lay the blame on the doorsteps of someone else. A lot of technology needs to be employed by the Government as well as the healthcare professionals and see the supply chain management from complete origin to the end. We should know their suppliers, and the suppliers of suppliers. We should know the cost of goods and should secure everything so that we are not dependent on anyone for the management of the disease and patients in future,” Bajaj opines.