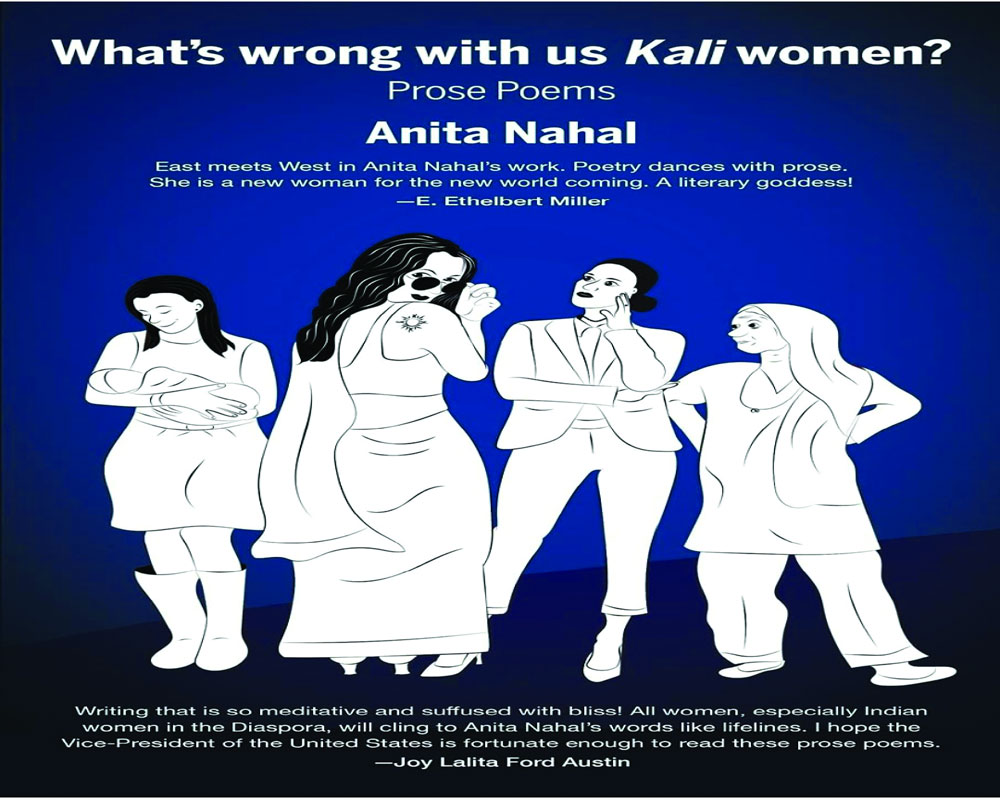 What’s wrong with us Kali women?

In her prose poems, What’s wrong with us Kali women? Anita Nahal probes with the tenacity of a philosopher, existential questions of being and nothingness and of identity and subjectivity, writes Swati Pal

You open the book to the title piece and you are hooked. In the first short passage, Anita Nahal puts together the oppositions that we live with, that we have internalised, that we resist, that we surrender to, that we challenge and in our hearts, rebel against. Be it the colour of the dark skin that is abhorred though ironically people try to tan theirs, the rapaciousness of men from which there is no reprieve, the double speak of worshipping women as goddesses and then tearing them down, all this and much more does Anita forcefully, poignantly and poetically put to the reader. And the haunting line that she repeats, ‘Don’t think she’s not watching’, stays with you as you turn the page.

And when you turn the page, she paints in words the picture of who really a goddess is. Fiercely alone whether among strangers or with those she knows, fending for her children herself, taking on a world that would judge a divorcee, that is the human and Hindu goddess that Anita would want us to see. And to be.

The next piece on ‘How easy it is for a Black life to be taken' is a slice of real life. Real, living beings, non whites whose life was extinguished. Just like that. Snuffed out. As a reader your hair will stand on end and your eyes will prick with unshed tears even as your heart will smoulder with rage. Anita makes you think of the dead. And with them. In this piece of writing as well as the next when she wonders what happens to the clothes of those who died. Especially now, of Covid. How quickly they are bundled away while their clothes hang in the cupboards, mute testimony to the existence of their wearers.

Watching, seeing, observing, gazing — the whole idea of looking, of voyeurism, takes on a new meaning as Anita focuses on the jungle in Smooth operators and questions, who is looking at whom? As a reader, I have often wondered too. We create wild life sanctuaries and zoological parks, what do animals, caged or free, think of us humans. Do they see us as caged or free? Do they know we are humans or do they see us, in our hordes, as two legged animals? Anita prompts you to think along these lines. Her writing about the animals makes them so much more human than us humans. The beautiful story about consideration rather than sex, which the male sloth understands is touching indeed.

Anita probes with the tenacity of a philosopher, existential questions of being and nothingness and of identity and subjectivity. Her words reveal a quest to really go into the heart of our ‘self’, almost particle by particle as we see in ‘Hard: Us, animals and the aliens' or in ‘Greatest warrior is metamorphic Mother Earth’. She has a knack of self analysis so keenly felt in some of the poems such as ‘A sip of wine’. There is also a sense of being pummeled by the world, of being trapped in a space that is claustrophobic which one comes across in many images including the one just mentioned and the next entitled ‘Chase away demons left behind’. A characteristic poetic device that she uses so effectively is personification as we see in the way she personifies the concept of patriarchy.

While most of the prose poems are dark and somber, there is a playful yet serious look at the way women deal with ageing in the frothy piece ‘A woman’s age is kicking and alive’.

Another poem that looks at the body, at age, in a brief recall is ‘Mom’s shoulders’. Anita can see the flip side of things and so her look at the Corona struck situation where nature blooms even as some foolish people continue to be callous about safety measures, is an honest review of a contemporary issue. While her engagement with the pandemic can be seen in several of her pieces, she is also clear that the concern for this abnormal time can make one lose sight of the eternal wheel of time with its larger questions as we see in ‘Know your wheel, Homosapiens’ or in a different sense, in ‘Breathe’ or ‘Covid 19’s inverted triangle’ or ‘Reclaim your space’.

Anita’s selfhood is clearly shaped by her location as an Indian Immigrant and she acknowledges that in many of her pieces such as ‘Spilt milk in native and foreign lands’ and ‘Fallacy of a single, immigrant mom’. While she is alive, as immigrants are, to the traumas of being one, and to repeat, we see that so starkly in ‘How easy it is for a Black life to be taken’, one does not get any nuance of self pity or even of being forlorn. In fact, one of her prose poems is ‘Pity, go take a hike’— she shuns pity entirely.

Anita is alive to the choices she has made and in her writing we see a kind of acculturation; she is aware of the multicultural, pluralistic world she inhabits and is absolutely unapologetic about any aspect that shapes her multidimensional self.

In fact she points out quite assertively that we are all in a sense immigrants in her piece, ‘You are an immigrant too’. There is a sense of a kind of acceptance of cultures and thus her calm assertion that her son would cremate her in America and scatter a few ashes in the Ganges, as her repayment of debt to the two lands, America and India that she has been a part of. This we see in ‘Paying my debt to two lands’. She is critical of both, especially of the way women are treated in both countries, either seen as easily available if found in miniskirts and dancing or outraging society for doing so which we see in ‘Babylon, my sinful dance music’.

Nothing escapes Anita’s eagle eye and pen including the discomfort faced by women during their menstrual cramps as we see in ‘Feeling down, being down’. The woman reader will find every word resonating. Betrayal looms in a lot of her writing, the betrayal of democracy, the betrayal by blood relations, and the betrayal in relationships. While it is the underlying motif in many of the poems, ‘Family Blood,’ ‘Democracy in decline’ and ‘Koala and judases’ echo the theme more sharply. It is interesting to point out as with ‘Koala and judases’ that some of Anita’s writing is inspired from Australian art and culture. Undoubtedly then, her writing is bound to strike a chord in the hearts of people across the world.

The Kalis , the Durgas , the Sitas, indeed all the Hindu Goddesses whom Anita invokes in her writing are none other than Anita, you and me — the modern Indian woman, an immigrant or a persona in a multicultural world. She questions, she mocks, she laughs at, she rages, she refuses to ‘fit the bill’, she speaks out and will not be silenced or choked, she breathes, dances, sings , makes love, drinks and even while falling into depths of despair , never gives up on hope. And as we read Anita, we agree. There’s nothing wrong with us Kali women.

The book is here to stay. You will find it unputdownable. It is powerful, poignant and of course, exquisite prose poetry.

The reviewer, Professor and Principal, Janki Devi Memorial College (DU), has been an educator since the last twenty seven years