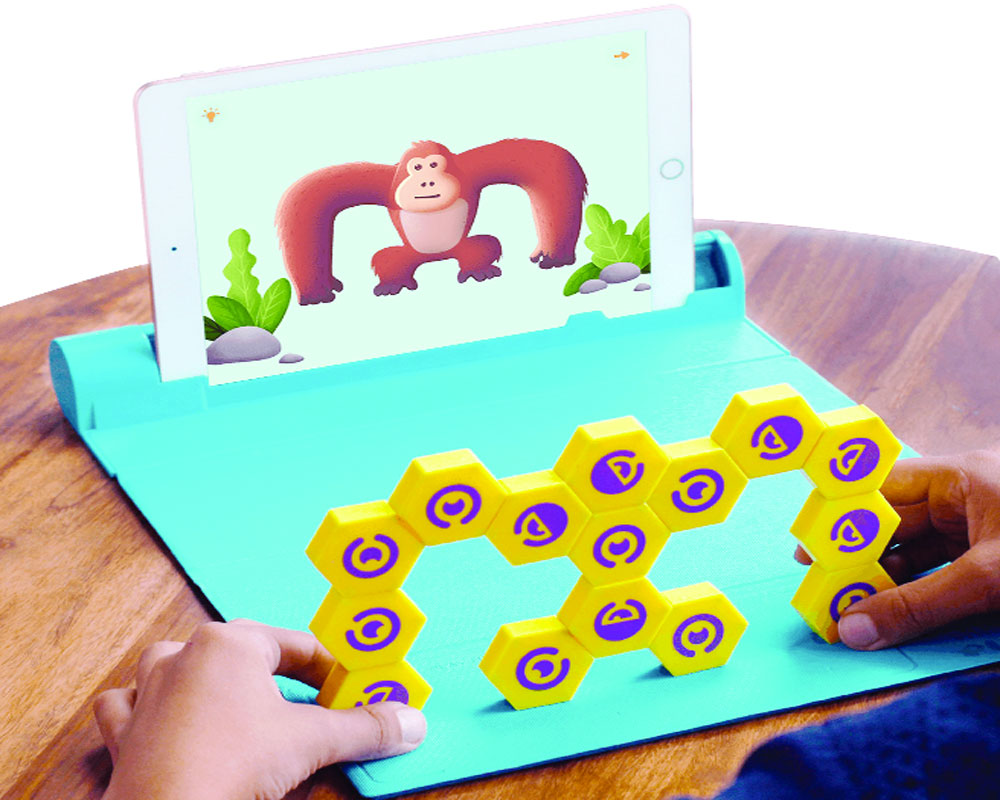 Augmented Reality toys are the new entrants in the market justifying extra play time on ground of contributing to child learning. MUSBA HASHMI speaks with experts to tell you more

All work and no play makes Jack a dull boy, only a few would have believed in it. However, the current education world has turned more into a playground for the kids, where they frolic with toys while learning on the way. The latest entrant to enhance the learning process is the much-talked about AR technology, which is revolutionising the way education is perceived.

Dolls and guns are slowly be relegated to the kids' cupboards. Gone are the days when kids used to run away at the mere mention of study time. Now, parents are engaging children with meaningful play hours where they get educated without them even realising it. Educational toys is the biggest category in the toy industry and is also the fastest growing among all other categories. Here comes the new kid on the bloc — AR toys.  With the arrival of smart AR-toys, the world has become your child's oyster. They can make playtime productive, learn through stories, and travel the world without actually leaving home. With the increasing number of kids, parents, and educators alike who use AR-toys regularly, one thing's clear. AR-powered learning toys are the next big thing in education, and by the looks of it, they're here to stay.

The pandemic has also led the majority of parents (62%) to see that devices and technology can be used as educational tools, as per the Morning Consult, a market research company. “The reasons for the rise of AR toys are manifold. Children in their formative years are bubbling with energy and enthusiasm. Sadly, their short attention span is no secret. They lose interest in games as quickly as they gain it. While traditional games might be exciting for a few days, they might not be able to hold the children’s attention for long,” says Vivek Goyal, Co-Founder & CEO PlayShifu. It is no mean feat that PlayShifu toys are currently bringing joy to children across 35 countries.

When engaging the kids at home, it’s essential to introduce them to toys that yield a different experience each time. Predictable games often lose their sheen quickly, leaving the children disinterested. Going gaga over the latest fad, and the fact that these toys have helped in enhancing her daughter's  concentration, Gurugram’s  Kusum, mother of four-year-old Nia, says, “The normal toys got boring after a while as most of them needed my assistance too and some of them were closed-end toys. Most striking change has been in her concentration span since these toys are interactive, interesting, and lead to questions and exploration.”

A lot more parents are picking up educational toys, now more than ever. They are investing in products that offer learning opportunities for their children. But, these investments are fruitful only when the children themselves find the toy exciting enough. “Our primary focus is to achieve that balance and create phygital experiences that are both fun and educational. Our games thrive on creative storytelling, animated characters and innovative interactions that make learning a delight. There’s no greater joy than to see a child learning while playing — and not being able to tell the difference,” adds Goyal.

How these toys work

The link between the real (or physical) and the digital (or virtual) world, augmented reality is an interactive experience that blends both worlds. In gaming, AR bridges the gap between the physical toy and the smartphone or tablet. For instance, some games need you to use your smartphone to scan a real-world object to  move ahead in the story. If the real-world object is a flashcard of a tiger, the smartphone presents interactive image, video or a 3D figure of the animal on the screen. In some games, the goal might be to find hidden objects by scanning your actual surroundings with your smartphone.

“The prospect of bringing an object to life is fascinating and exciting. If the topic at hand is how animals live in their natural habitat, AR can teach it through 3D models. Younger children can listen to the sounds the animal makes and understand its eating habits, all through stories and simple games. Meanwhile, older children can learn about the food chain and complex ecosystems, through interactive and informative games,” informs Goyal.

AR makes it possible to explore multiple avenues of learning and present various pieces of information in a visual, easy-to-understand manner. Where a regular map tells you about countries and capitals, an AR-powered globe takes learning to a whole new level. It not only teaches geography, but also introduces you to various cultures, cuisines, monuments, and animals-all at the touch of a button. By marrying tactical play and digital storytelling, AR toys bring together the best of both worlds. Various digital elements like audio, video, images, and 3D content, merge with physical components of the toy, thereby making learning a unique and inclusive process. The AR technology also helps the child interact with the world around them and creates two-way interactivity, where the child feels like they have control over what they're learning.

Moreover, AR creates a system of instant feedback that motivates the child to learn more and be more accurate. Most AR toys provide a progress report or graph, which is a personalised evaluation of your child's learning curve and progress. This report can be monitored and tracked from time-to-time.

Tech-enabled toys are on the rise worldwide. In the US alone, tech-enabled toy segment grew by 36 per cent when the overall toy industry was almost stagnant. This segment in India is growing even more. In the coming years, we see this growth trend continuing.

There are a handful of companies working in this industry. “Consumers in this segment do not buy the tech for the wow factor, but for the lasting impact and use case. Sooner or later, every company in this industry will create meaningful experiences that have a more significant objective, built on a base of AR/VR technology,” says Goyal.

Since kids are fond of play-based learning and augmented reality toys help to enhance life-skills in children. These AR toys and games help improve their digital aptitude as well as their cognitive skills. They have been at the forefront of combining education and entertainment for kids. Various research also says that creative thinking in the brain develops majorly during the early ages of the kids’ lives. Kids draw, tell stories, sing, dance, and write without any specific training because a child’s brain is free to learn and imagine things rather than being logical about it.

“It’s still not the same as that of self learning but is probably the next best thing and definitely better than passively watching TV screens and tablets and mobiles. Augmented reality toys improve the child’s imagination power as they get to draw, paint, write and tell stories the way they want. Moreover, these toys are kid-friendly and safe to operate as they don’t have any live wires or sharp ends,” says Dr Rohit Arora, Head of Neonatology & Pediatric, Miracles Mediclinic, Gurugram.  He says that for an early age tech-savvy kids, AR toys provide something extra to boost their brain development. “Interactive AR toys can help them understand information at their comfort level and retain it for long. These toys are engaging, experimental and immersive from a child’s perspective,” adds Dr Arora.

However, experts warns that AR games can have a harmful impact on kids' eyesight. There is a threat of drifting away from reality as they might not get in-person interaction as much. These toys can be addictive for kids, and they can create confusion in young minds.

“Unlike video games and apps, AR toys aid in motor skill development with tactile play. However, being too dependent on AR toys can affect the development of social skills in young children. Disproportionate exposure to screens can affect their concentration levels and can make them withdrawn,” says Prakriti Poddar, Global Head for Mental Health at Round Glass, Managing Trustee Poddar Foundation.

Assessing the impact of screen time on the emotional health of children, the World Health Organisation recommends no screen time for babies under two and no more than one hour of screen time a day for those aged two to four. “Excessive screen time can reduce the child’s capability to rely on themselves, especially in times of crisis or strain, and reduce concentration, focus, and the feeling of empathy,” she adds.