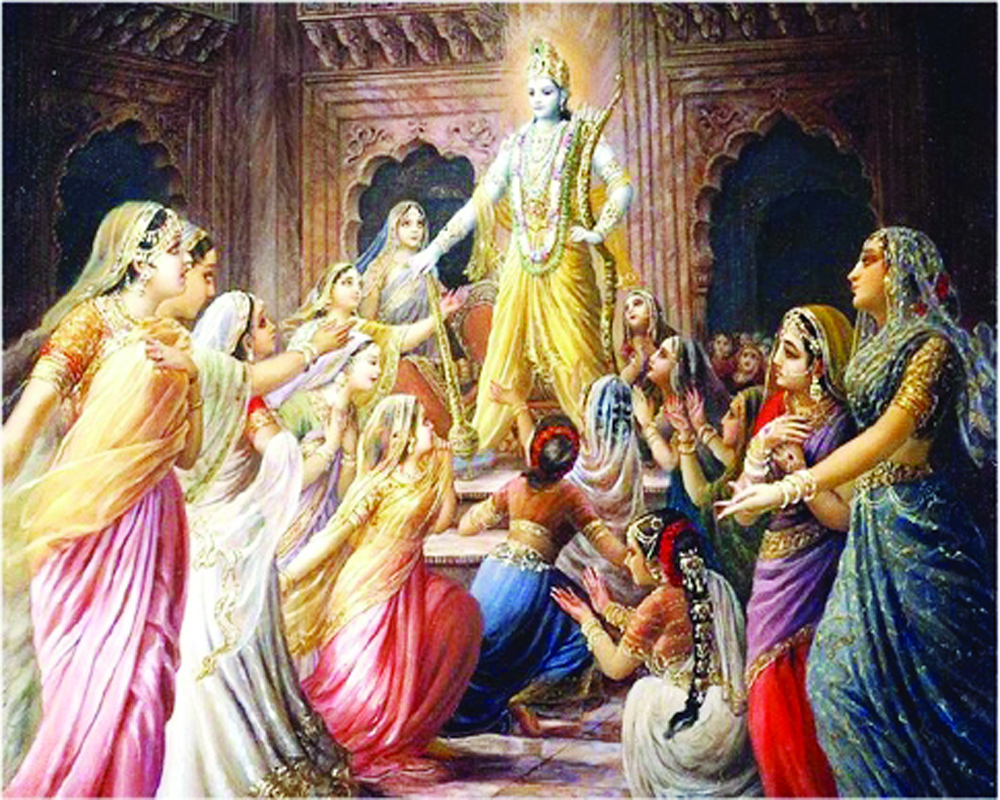 The sources of Krishna saga contain varied accounts that speak of his multiple marriages. It is said Krishna was married to 16,100 damsels. Most of these marriages were a consequence of his military expeditions in the far-east of India, the modern Assam. Krishna’s eight other marriages are referred to in the Puranas. While most sources are silent over Krishna’s other marriages, his marriage to Rukmini, his chief queen, is cited in almost all the sources of Krishna-saga — an argument cited by many scholars to bracket him with the popular monogamists of the age like Shri Rama, Nala, Satyavan and the others.

These scholars, to prove their view, quote a verse from the Mahabharata, which equates Shri Krishna with the famous monogamists of the age. It is said, Krishna carried away Rukmini moved by her deep love and desire to marry him. Later, they duly wed at Dwarka. Next, during the syamantak-gem episode Krishna is cited to have married Jambhavati and Satyabhama. Thereafter, it is said Krishna married Kalandi, River Yamuna-incarnate. His marriage to four maidens — Shrutakeerti, Bhadra, Madri and Hemavati is mentioned next.

The river goddess, Kalindi, had begged to marry Krishna, which reflects his influence and power during the Dvapara-age. Philosophically interpreting Krishna’s personae, it may be stated that Lord Krishna with this bounteous grace undertook the role of a husband to all women, who looked upon him to be their guardian and saviour. At the same time, he is perceived to be the father to all the men of the world [the second role makes the first role of the Lord inevitable].

According to the Yoga system, there are sixteen thousand one hundred nerves which get united at a prime-place near the Sushmna nerve, and a Yogi has to hold full control of them for exercising and carrying out some specific Yogic sadhanas. Shri Krishna being an excellent Yogi used to inculcate such austere sadhanas by exercising full control over his body with all these nerves. He was styled as the Lord or the Swami [husband] and master of these nerves, which probably was taken to imply his wives.

In the symbolic context, his so many wives also imply his immumerable Vibhutis in this world, reference to which is made in the Vibhuti — Yoga of Gita (when Krishna tells to Arjuna about this “ na asti anto me divyam vibhutanam”). Likewise, his eight chief queens including Rukmani are symbolically treated as implying three qualities of Sattva, Rajas, Tamas (in human body); the river Ganges, presiding goddess of the Himalayas, Samaveda-mantras personified, soul and the personified [Krishna] patients virtue in itself.

Mythological, the multiple wives of Krishna represent the Apsaras of Heaven in their former lives with as well as the multiple incarnation of goddess Lakshmi. The Apsaras assumed their next birth on earth to attain Lord Krishna as their sole husband. Besides, Param Purusha Krishna’s multiple wives are also symbolically viewed as the different forms of Prakriti. In this context, the relation between Param Purusha and Prakriti corresponds to that between husband and wife. So, Krishna, the god has sixteen thousand one hundred eight forms of Prakriti as his wives. Likewise, his eight chief queens are symbolically represent major energies of Prakriti known as Mula (primary) Prakriti, namely — Tattva, Mahat, Ahamkara, Akasha, Vayu, Tejas, Apas and Prithvi.

The writer, a noted Indologist and authority on Krishnaite Studies, was a regular contributor to Agenda, The Pioneer. We recently lost her to the pandemic. Her presence in the form of writings will be missed