Of Art with No Future

Of Art with No Future 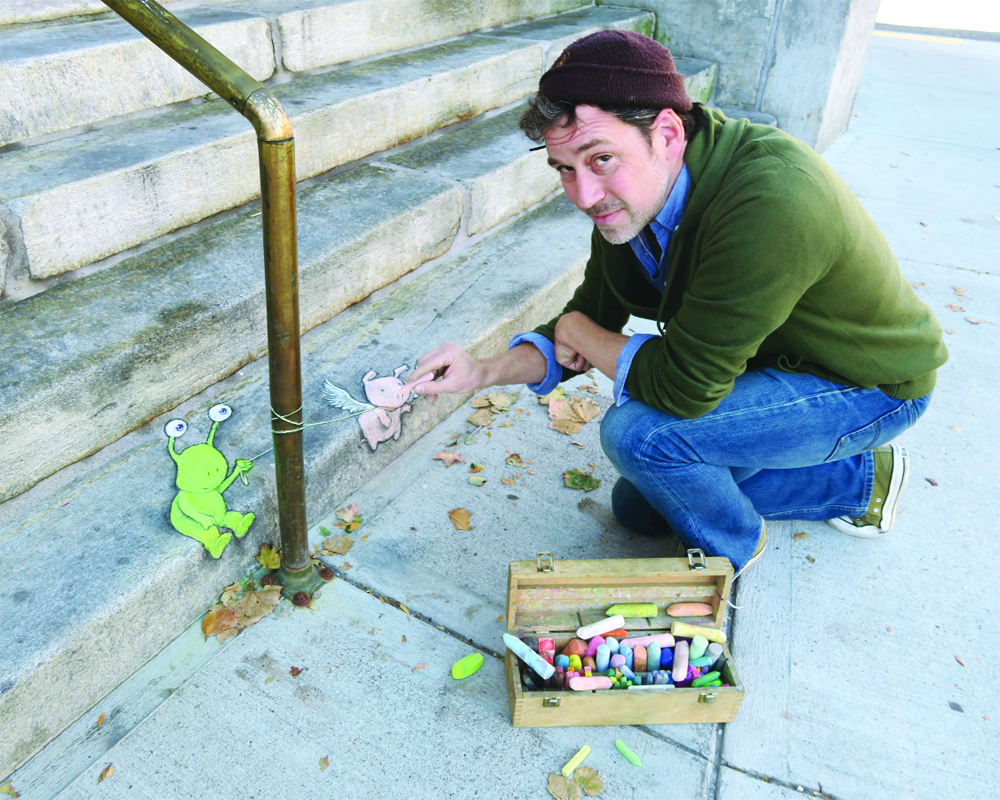 DAVID ZINN, a 51-year-old USA-based artist is changing the way how chalk is perceived. He speaks with MUSBA HASHMI about what made him take to street art, why he uses chalk and loves working with it even though it has no future, among other things

What comes to your mind when you hear the word chalk? Is it classrooms and blackboards? Most probably yes. But have you ever wondered that a piece of chalk can do so much more than just teaching and give birth to a life-like creativity?

It must be hard to believe for many, but a 51-year-old USA-based artist is taking the internet by storm through his creative arts beautifying the cracks on the streets of not only his hometown Michigan, but globally.

David Zinn’s social media handle is anything but normal, you ask why? Because of the colourful and thought-provoking artworks that are a sureshot dose of good creativity.

“For the first half of my adult life, I used freelance commercial assignments to avoid the intimidation of trying to create art that exists only to be art. The functional necessity and specific deadlines of commercial art circumvent the indecision I felt when trying to paint from the heart. That job gradually became more computerised, and soon I was working long hours alone at a home computer indoors when the weather outside was warm and pleasant. I started making art on the street as an excuse to spend time outdoors, but I discovered that my anxieties of creating art were eased when the art being made was temporary, childish and anonymous,” Zinn tells you.

He adds: “Also, getting my hands dirty with chalk dust was more gratifying to my inner child than making art on a computer.”

No matter how easy it may sound to draw with a chalk, there is always a trick that help produce fantastic 3-D pieces and not just amateur drawings.

“I am using two tricks when I draw on the street with chalk, and the the first and simplest is just including the colour black. Most children’s chalk is sold in pale colours for use on light-coloured pavement and even children eventually lose interest in creating art that is only barely visible against its background. Using vine charcoal in addition to chalk allows for more detail, more contrast, and, crucial to any 3-D illusion, more shadows. Shadows do a surprising amount of work in 3-D street paintings,” he explains.

The second trick, he says, is anamorphosis, and there are many artists who can both execute and explain that trick better.  “By definition, an anamorphic artwork is deliberately distorted in such a way that the image will look “right” only when seen from one specific point of view, for example through a camera placed at an oblique angle or reflected in a curved mirror. The more extreme the angle, the more distortion is required. My creatures require very little distortion because they’re comparatively small, but the parts farthest from the camera are still larger and taller than the parts that are closest. Thanks to the effects of perspective, all those parts appear to be equal in size when photographed at an angle, and that’s what makes the creature look like it’s three-dimensional instead of flat on the ground,” Zinn explains.

While there are many advanced tools to make 3-D art, one of the main reason why Zinn goes what you can call the traditional way is the portability of the tool. “There are practical reasons to use chalk, such as the portability of the tools; in a pinch, one stick of charcoal behind one’s ear is sufficient, whereas painting with acrylics requires paint tubes, brushes, palettes, water, and much more. Furthermore, creating permanent public art typically requires either hard-sought permission from the property owner or light-footed lawbreaking. Chalk art is easier to create on a whim, knowing that any objections can be resolved by a brief rainstorm or a spilled cup of water. More importantly, ephemeral art is free of the most distracting question artists have to consider: what will I do with this when it is finished? Creating art is a joy, but preserving art, shipping art, selling art, and even storing art are all dull necessities. I can’t speak for others, but I find it easiest to create art that has no future and therefore no consequences; there’s no need to focus on anything other than whatever creative whim will make me happiest in that moment,” he says.

Not to mention that nothing comes easy be it travelling to space or cooking a meal and the same is with what Zinn does. “The most persistent challenge is the capriciousness of the weather. Many aspects of the outdoors are not chalk-friendly and a perfect day can suddenly become windy or rainy, especially where I live. Even unexpected clear skies can be a nemesis, because direct sunlight creates shadows that can cut across a 3-D artwork and defy the attempted illusion,” he tells you.

However, Zinn doesn’t have much to complain with the inevitable destruction of his art after it is finished. “I am fully comfortable with the inevitable destruction of my art after it is finished. I’m only frustrated by drawings that never get finished, because the interrupted creature lives impatiently inside my head until I find another opportunity to set it free,”  Zinn, who spends an hour or two on each artwork, tells you. He recalls an art which he completed in a matter of just six-and-a-half minute. “I once hopped off a train during the employees’ seven-minute cigarette stop and had finished an artwork six-and-a-half minutes later,” he tells you.

Till date, Zinn has created temporary and permanent artworks in 30 cities in the US, Canada, Europe (Germany, France, Netherlands) and Asia (Taiwan). “I have made an average of 100 installations per year for the last eight or nine years and I have been drawing on the street for about 15 years, so I’ve probably made more than a thousand artworks by now. Luckily, the ones I created in my own neighborhood have all washed away in the rain; otherwise, I would have no more opportunities nearby,” he asserts.

There is some kind of thought, he says, that goes behind an art.  “Each artwork begins with pareidolia — the human habit of perceiving meaningful images in random arrangements of shapes and lines. Streets are covered with marks and textures, and as soon as a pair of specks have revealed themselves as potential eyes or a drain grate as a mouth, I add my own additional lines and shapes until the artwork starts to look more like what it wants to be. Choices have to be made along the way, but the most successful images come together without much thought,” Zinn tells you.

Zinn has a piece of advice for those who want to take-up this field. “The tools for chalk street art are inexpensive to buy or can be made by hand, they’re small and sturdy enough to carry on a whim, and using them requires no elaborate training or cleanup. Chalk’s childish reputation makes it a familiar and accessible art-making tool even for people who don’t think of themselves as serious artists. Finally, because the results are temporary, there is no need to feel anxious and intimidated about the value of what you create,” he tells you.