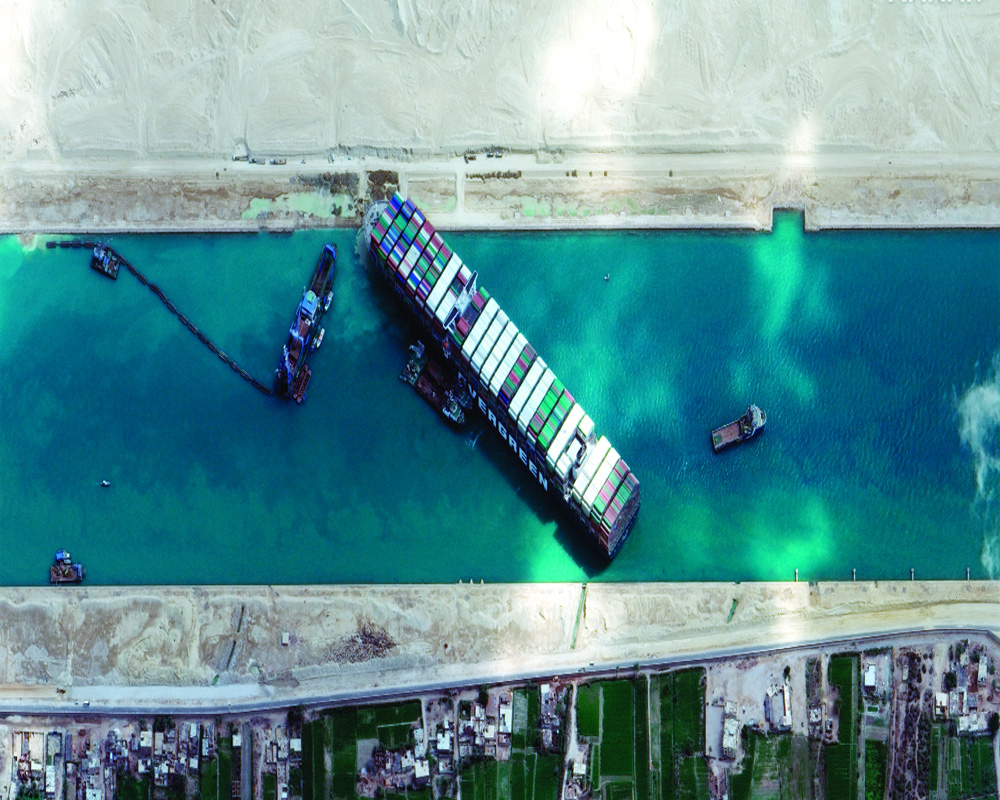 On March 23, 2021, global business took a billion-dollar hit after the goods ship Ever Given beached diagonally causing a complete traffic jam. MUSBA HASHMI speaks with experts to bring you a report on what may have caused the ship to get stuck, the legalities involved and the fate of the crew on board, 25 of whom are Indians

Many of us might have come across the image of, what looked like a still from an animated action movie, a ship blocking a canal, not a random one, but the Suez Canal —  an artificial sea-level waterway in Egypt, connecting the Mediterranean Sea to the Red Sea through the Isthmus of Suez and dividing Africa and Asia. The blockage, however, might not sound much of a deal  to you, but the six-day long traffic jam caused by it was disastrous enough that it resulted in a loss of not less than $13 billion.

The incident is big enough that even Google has a different take on it. When you search Suez Canal on the search engine, you will see a GIF of ships sailing through easily. Not sure whether this was updated after the blockage was cleared or before, it is interesting enough to get a special mention.

The picture kept memers on their toes, who, without wasting much time, started coming up with hilarious tweets and posts. So much so, that such a humongous blockage turned meme material within minutes.

If you wonder, what has been the size of Ever Given, one of the world’s largest ships operated by Evergreen Marine Corp, it is 400 metre long, double the size of the Statue of Liberty. To give you more analogies, the size of the container ship is five football fields long and as high as the Eiffel Tower.

With that being said, there are reports that suggest that the ship was moving at a fast speed and that can be one of the reasons behind this unfortunate blockage which left this huge beauty stuck in a diagonal position. But Captain Kamal Chadha, MD, Marex Media Pvt Ltd, has a different take on it.

“On either sides of the canal is a flat land, a desert. So, the wind can blow at a fast pace. When such a huge ship packed with containers is in a narrow channel like this canal, no matter what the speed is, it is difficult to steer; it is not a car, of course. There will be friction between the ship’s surface and the water because it is gliding on water. In such a case, maneuvering a ship can be tough and has to be done carefully. In such a situation, one cannot lower down the speed below a certain level because otherwise it will not manoeuvre. You need speed to move. Now the exact status of the speed can’t be assumed until we have all the details,” he tells you.

Many safety agencies and other authorities are up and running. The company also is conducting their inquiries internally not to play the blame game, but in order to prevent  the reoccurrence of such an incident.

Not to forget, there are many people who were in attendance on the ship. On the bridge, from where the ship is commanded, there is a Captain, officers, pilot, a man who is steering the ship and down below are the engineers who are monitoring the working of the engine. “It is not one man who is taking the ship through, it’s a complex process. There are authorities who keep an eye on the operations of the ship. As for the canal, there is one ship behind the other. Hence, it is a planned and carefully executed operation. For years, nothing happened, but then in one go such an incident occurred. The reason why people are doing guess work for the time being is that there is not enough information available. However, the bottomline is, it is an accident and will be investigated thoroughly. It is too early to draw conclusions,” he explains.

The commercial losses, he says, are a point to discuss. For the ship itself, the authorities have to find out all the damages that might have happened to the ship.  Then, there was a delay in the ship reaching its destination and due to this, some goods might have been perished. Also, the ship was hired by a company, there will be losses on that side as well. “Moreover, there are a lot of consequential losses. First of all, the Suez Canal authorities might have lost a lot of money. There can be losses of  about $30 million per day, but it’s a wild guess. But, overall, experts believe the industry stands to lose $13 billion in these six days. However, I am positive the losses are much higher,” he asserts.

Such an incident, without a second thought, invites legalities. Since there are a lot of people involved, it is matter of time and proper inquiry that will suggest who is to blame here.

“There are various parties involved. First of all there is the Suez Canal authority, then there are ship managers and the charterers, people who hired the ship. Mind you, that most of these parties must have insured themselves against accidents and consequential damages. Hence, the insurers will also be involved in this situation because directly or indirectly, the brunt of this would be beared by the insurance company. Also, there are re-insurances, they are the ones who further insures the insurance companies. It can continue to extend. Not only the companies, there will be individuals who have the right to make a claim of recovers or whatever in case of the legalities. Fortunately, there is no loss of life or environmental damage that has been reported, otherwise it would have made things more difficult. We can only wait and see where the blame gets pinned,” he says.

Among all the hustle and bustle of the incident, the less talked about fact is what happens to the crew that was on board. Will they continue to work or will they services be held back?

“The crew will be safe, unless it is in some way proved that the crew was directly involved in doing something on purpose that led to the accident. There might be a cause of negligence that may happen. But, in this case, the crew will go with the ship and their Protection and Indemnity (P&I) insurance and the P&I club are there for their protection. I don’t foresee any difficulty for them because the most important question is were lives lost? The answer is no. Was there environmental damage that happened? The answer is no, again. Generally, beyond these two points, there is no need to hold the crew back. One can have an inquiry, but with that being said, the crew will proceed with their services. Also, as far as I perceive there are no criminal charges applicable in this case and hence, no reasonable approach that requires to hold the crew back,” Chadha explains.

With all the speculations rolling in, Captain Nalin Pandey, CMD, Pentagon Marine Services Pvt Ltd and a member of the Maritime Association of Shipowners, Shipmanagers and Agents, says that one has to wait for an official announcement to come in as to what exactly happened that left the vessel in such a position.

Having said that, one of the many reasons of the blockage that are being speculated is that there was a sandstorm and the wind force pushes the ship in the opposite direction. “Since there are no reports of machine failure whatsoever and the crew was well-qualified, we cannot roll out the sandstorm factor. I don’t want to speculate other things and can’t blame the crew for the accident since they are competent enough and the chances of this are very less,” Pandey says and tells you that there were about 400 ships that were left stranded, however the exact numbers are yet to be confirmed.

There were ships coming in from both the sides and some were even about 50 miles away from the canal, all stranded.

As for the losses, he says, it has to be beared by the ship owners. “There is no loss as such for the Suez Canal, because if the accident didn’t happen, they would have passed a week earlier and now a week later. But eventually, the vessels passed the canal and must have given the taxes. See this as if you have parked your car ahead of a toll plaza. You are waiting there for half an hour, but after that you will eventually have to go through the toll plaza and give your tax. So the Suez Canal didn’t lose anything instead they did more business by supplying the stuck vegetables to their destinations. The Egypt didn’t have much to lose, but the cargo owners and the ships that were in the waiting line was losing on money,” he tells you.

The silver lining in the grey clouds was that the ship, finally, was freed on Monday. It was nothing, but the usual operations that were implemented. “Tugs dredgers and a digger were called from around the world. Some of the weight was reduced; however, not much weight shedding was required because of the high tides that helped in refloating the vessel. What, however, might have caused the delay, is the time taken for the dredgers to reach the canal and get mobilised. Also, because the crew’s safety was paramount, the plan had to be carefully assessed by the authorities and then implemented. All this takes time. Since they were able to refloat it in a week or so, full credit goes to them,” he says.

Directive issued to sanitise all cold storages in UP

Mayawati for free Covid vax to all poor