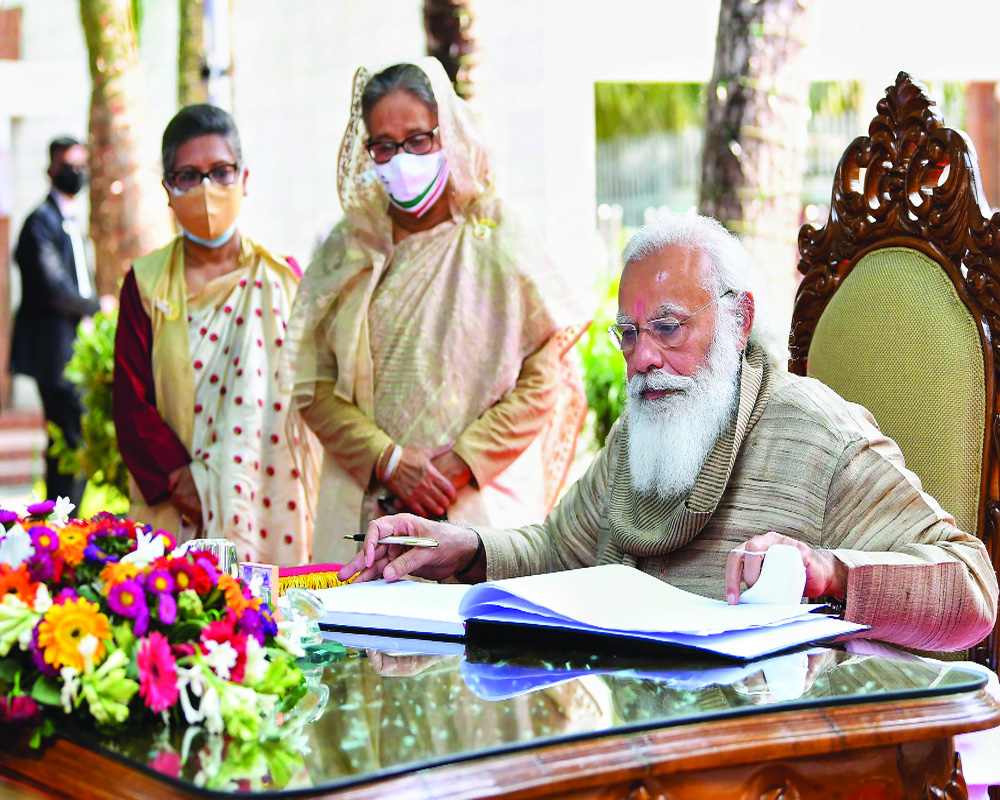 Prime Minister Narendra Modi’s visit to Bangladesh on its 50th Liberation day and his becoming first head of any state/Government to pay homage at Bangabandhu Mausoleum have given a fresh impetus to the bilateral relations. The spirit of Vasudhaiv Kutumbakam and the Neighbourhood First policy have the potential to further cement the bonhomie between the two countries

March 26 marks the 50th year of Bangladesh’s liberation — a genocidal war in which three million perished and over 200,000 were women raped and several wounded after Pakistan Army launched an attack on March 25 midnight on unarmed Bangladeshis: men, women and children.

The attack started in Dhaka University targeting students’ halls, especially the Jagannath Hall which housed the minorities and Rokeya Hall that housed the women students — the most vulnerable groups in the mayhem created by the Pakistan Army.

The war started after Bangladesh declared Independence after the party of Bangabandhu Sheikh Mujibur Rahman, the elected leader of the country, emerged victorious in the 1970 election — the first ever election in Pakistan based on universal adult suffrage.

This was end of journey of Pakistan as a nation state based on two-nation theory. The Bengalis who had overwhelmingly supported the Pakistan movement were the first one to reject the state that denied their separate cultural-linguistic identity, exploited them economically and denied to respect the voters’ mandate.

In this war of liberation, in spite of all odds, India stood with the people of Bangladesh. Not only hosting ten million of refugees, but diplomatically mobilising the world opinion and drawing their attention to the enormity of violence and the challenges of hosting the refugees. In fact, at one stage the refugee population surpassed the population of the state of Tripura that borders Bangladesh.

Yet, like the Government, people opened their homes in the bordering Indian States, supported them and contributed funds for supporting the refugees. They took the refugees as members of their family. Without such large scale support by Indian people it would have been difficult for the Government of India to host the refugees.

On March 31, 1971, Indian Parliament passed a resolution saying the Pakistan Army’s brutality unleashed on unarmed people is “systematic decimation of people which amounts to genocide” and recorded “its profound conviction that the historic upsurge of the 70 million people or East Bengal will triumph”.

The main objective of Pakistan was to cleanse the country of Mujib’s supporters and sympathisers and they were helped by local collaborators to identify those who were considered a threat to Pakistan military regime for demanding the recognition of the election mandate.

In the March 7 speech, Mujib gave a call saying that this time it is the war of liberation, the war of freedom exhorting people to go ahead with it even if he is absent — anticipating his arrest or elimination. As the refugee flowed into India, Pakistan projected that these people are infiltrators who have been expelled.

India’s then Prime Minister Indira Gandhi speaking in the Lok Sabha, after a visit to the border States to assess the condition of refugees, had said, “This is an insult to the aspirations and spontaneous sacrifices of the people of Bangladesh, and a calculated attempt by the rulers of Pakistan to make India a scapegoat for their own misdeeds.”

She warned, “Pakistan cannot seek a solution to its internal problem in India by pushing its own people out.”

Though many countries, especially China and the United States, referred to this uprising as “internal problem” some thought that by providing aid to the refugees they would be able to pacify India.

The increased influx of 60,000 people per day only reflected the stark reality and the enormity of the crisis. India tried to cut down on non-plan expenditure, raised fare on the tickets for long distance travel, the entire Cabinet donated their salaries, people and other voluntary organisations raised money to support the refugees financially where as people of the bordering villages opened their home and hearth to look after the refugees.

Schools were shut down to accommodate the refugees. After 13 days of war, Bangladesh was liberated by India-Bangladesh joint force in which the Indian Army lost more than 3,000 personnel.

Bangladesh was accorded recognition as a nation state on December 6.

On the occasion of the 50th anniversary of Bangladesh Liberation war, Modi addressed the national programme in Dhaka and remembered the Bengali martyrs and Indian soldiers who laid down their lives for the liberation of Bangladesh.

He also conferred the Gandhi peace prize on Bangabandhu Sheikh Mujibur Rahman for “his outstanding contributions towards social, economic and political transformation through non-violent and other Gandhian methods.”

Modi on Saturday visited the mausoleum of Sheikh Mujibur Rahman and paid floral tributes to him, becoming the first-ever foreign Head of State or Head of Government to pay homage at the grave of “Bangabandhu” at Tungipara in southwestern Bangladesh.

This is significant as Bangladesh is observing the Mujib Barsho, the birth centenary of Mujib.

It was he who laid the foundation stone for a strong India-Bangladesh relation shared by strong bonds of history and geography, charactering this relationship as “eternal and enduring”.

The two countries in the past decade have made progress. After the ratification of landmark land boundary agreement which in itself is a history for implementing territorial adjustment and demarcating the border without acrimony and bloodshed, India also accepted the verdict on maritime boundary as adjudicated through international arbitration.

The demarcation of both land and maritime boundaries paved the way for comprehensive mechanism to manage the border, joint anti-terror military exercises, coordinated patrol by the navies of the two countries as well as coast guards.

Bangladesh put to rest the mistrust and suspicion by handing over Indian insurgent groups who were sheltered in Bangladesh by the previous Bangladesh Nationalist Party coalition regime.

The restoration of the Chilahati-Haldibari railway line and Karimganj/ Mahisasan (India)-Shahbazpur (Bangladesh) is underway. The Agartala-Akhaura rail project is under construction, financed by a grant from India. There are many firsts between the two countries. Tripura opened the first waterway with Bangladesh — the 90-km long Sonamura-Daudkandi route — apart from other waterways that facilitate trade. The last year witnessed the first container train reaching Bangladesh. The first parcel train carried chilli from Andhra Pradesh to Dhaka; in June a record 100 freight trains were run between the two countries carrying essential items like sugar, maize, spices and finished products.

India’s focus has been people of Bangladesh. Not only it provides the largest number of visas to Bangladeshis but it has concentrated on High Impact Community Development Projects which are implemented through Indian grants.

A total number of 63 projects with grant aid worth $160 million has already been implemented. India has established of 36 community clinics in five districts of Bangladesh and 11 water treatment plants in Bangladesh which will help common people.

All these projects are executed by the locals and have helped in contributing to employment generation.

In the spirit of Vasudhaiv Kutumbakam and the Neighbourhood First policy, India unfolded the Vaccine Maitri programme and provided the Covid-19 vaccine to its neighbours. It has gifted two million vaccines to Bangladesh.

However, major irritant remains. Water sharing is one of the issues that often threaten to derail the bilateral relations. There are 54 common rivers the two countries share. Over the period of time siltation, encroachment of river bank and barrage has affected the flow of the water. The need of the hour is to take basin approach to management and conservation.

Bangladesh is one of the India’s closest neighbours with which it shares largest land boundary. The relation is marked by mutual trust and respect as is evident by high-level visits. This is Modi’s second visit to Bangladesh. The socio-cultural aspect of the bilateral relations and people to people contact has remained life-blood of the ties. This has the capacity to make the two states overcome the challenges they face. In the golden jubilee year of diplomatic relations, the progress that the two countries have made in bilateral relations and cooperation would remain a Sonali Adhyay (Golden Chapter) in their foreign policy.

(The writer is a Research Fellow at South Asia Centre, MP-IDSA)