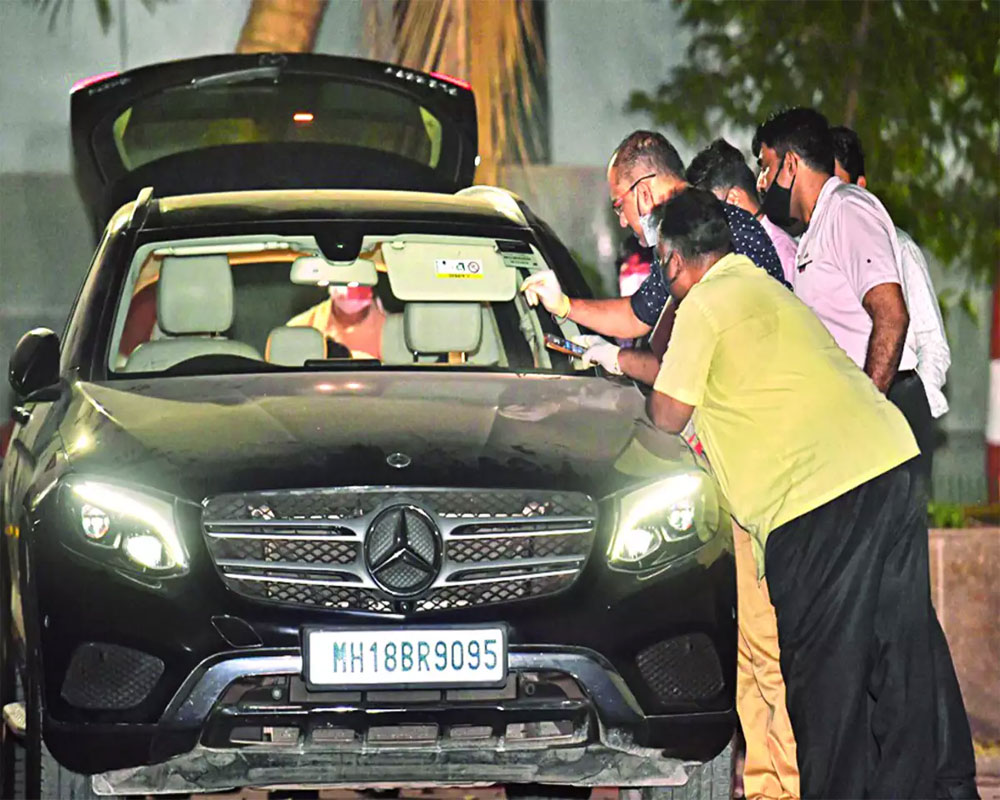 The NIA has seized a Mercedes car that was used by arrested police officer Sachin Waze and recovered Rs 5 lakh from the vehicle after searching his office from where "incriminating" documents were recovered, an official has said.

Waze is at the focus of a probe by the National Investigating Agency (NIA) into a case related to the recovery of an SUV with explosives near industrialist Mukesh Ambani's house in south Mumbai on February 25.

His plea contending that the manner of his arrest by the agency was illegal was also rejected by a court here on Tuesday.

Waze, arrested for his alleged role in the case on March 13, was attached to the Crime Intelligence Unit (CIU) of Mumbai police's crime branch till recently.

The office is located in the police commissioner's office compound in south Mumbai.

The NIA team recovered some "incriminating" documents and electronic evidence such as laptop, iPad and mobile phones from Waze's office there, an official of the probe agency said on Tuesday.

A black Mercedes car, which was being used by Waze, was also seized from a parking lot near the Chhatrapati Shivaji Maharaj Terminus (CSMT), and Rs 5 lakh in cash, a note-counting machine, two number plates and some clothes were recovered from it, NIA's Inspector General Anil Shukla said.

The searches started around 8 pm on Monday and continued on Tuesday, he said.

The NIA has so far recorded the statements of seven officials of the crime branch, including an assistant commissioner of police.

Kazi had on February 27 collected the Digital Video Record (DVR) of CCTVs from the housing society in Thane's Saket area where Waze lived, two days after the explosives- laden Mahindra Scorpio car was found on Carmichael Road near Ambani's house.

The probe agency suspects that it was collected to destroy evidence which could implicate Waze himself, the official said. During the search, the DVR was seized.

The wife of businessman Mansukh Hiran, who had claimed that the Scorpio was stolen from his possession and who died mysteriously, has alleged that the SUV was being used by Waze for some time.

The SUV case was taken over by the NIA following Hiran's death.

A special court on Sunday remanded Waze in the custody of the central agency till March 25. On Tuesday, the court rejected Waze's plea claiming that his arrest was illegal.

His lawyers Sajal Yadav and Sunny Punamiya argued that Waze was not produced before the court within 24 hours of his arrest, as is required.

No sanction was taken from the state government under section 45(1) of the Code of Criminal Procedure, the lawyers contended.

Under section 45(1), the sanction from the government is necessary if an official is to be arrested for anything done in his or her official capacity.

Waze was arrested at 11.50 pm on Saturday and produced before the court at about 2.45 pm the next day, he said.

Waze was called in the morning for some clarification about the probe, but he arrived late at night, the prosecutor claimed.

Waze's lawyers had alleged that he was detained since 11 am on Saturday.

Sanction was not needed as Waze had not acted in discharge of his official duty, the NIA's lawyer said.

Judge P R Sitre, while rejecting Waze's plea, observed that he was a policeman and knew his rights.

"The entry in the station diary clearly reflects that intimation was provided to the accused and the police station concerned and also information about his arrest, which means grounds of arrest, were provided," the judge said.

Whether he had acted "in the course of performance of duty" can be examined during the trial, the court held.

It allowed Waze's lawyer to watch his interrogation from behind a glass partition, but not within the hearing distance.

Earlier, speaking to reporters here on Tuesday, BJP leader Pravin Darekar said the more the ruling Shiv Sena in Maharashtra defended Waze, the more suspicion there will be about the state government's intentions.

The Sena had on Monday said the takeover of the case by the NIA was an "insult" to the Maharashtra police.