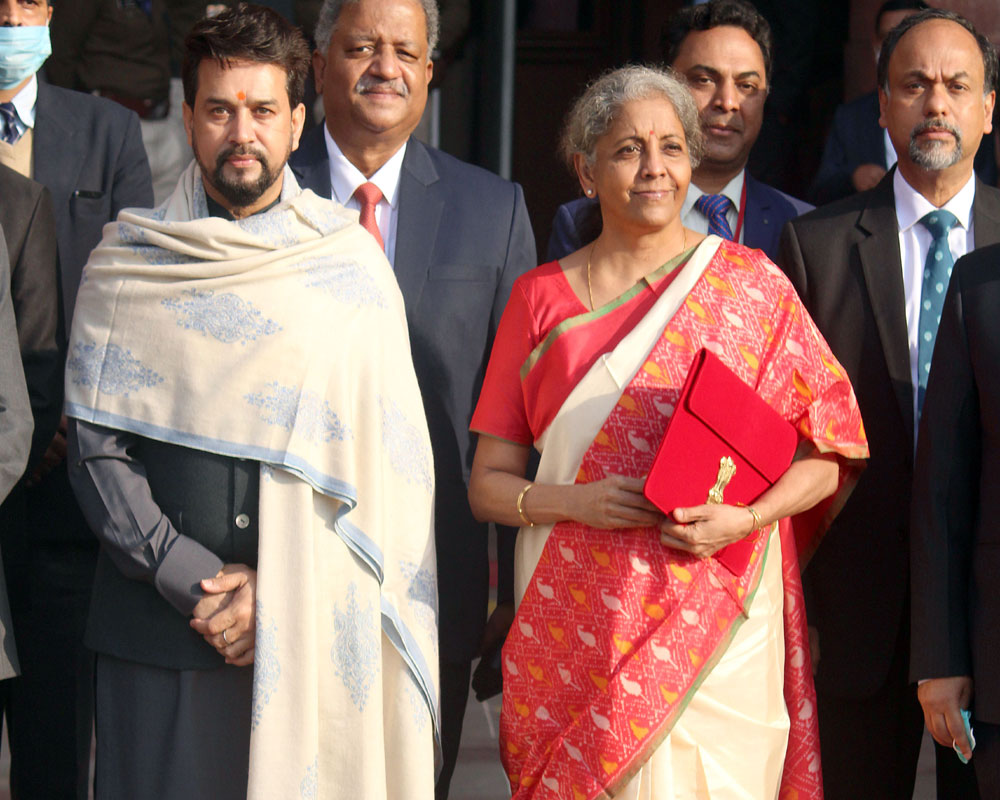 Finance Minister Nirmala Sitharaman on Monday used her trademark 'Bahi-Khata', a ledger wrapped in a red-coloured cloth, to carry Budget documents as she arrived in Parliament House to present her third straight Budget.

Sitharaman, India's first full-time woman Finance Minister, had in July 2019 ditched the colonial legacy of a Budget Briefcase for the traditional Bahi-Khata to carry Union Budget Papers. She used the same last year and again on Monday.

Her budget for fiscal year beginning April 2021 (FY 2021-22) is Modi government's 9th straight budget since 2014 (including one interim budget presented ahead of general elections in 2019).

She was appointed Finance Minister when Modi swept to power again in the 2019 election, and presented her maiden budget on July 5, 2019. She used a red-cloth folder enclosed with a string and emblazoned with the national emblem to carry the Budget documents.

Earlier, Finance Ministers in different governments including her predecessors in the Modi government - Arun Jaitley and Piyush Goyal - used the standard budget briefcase.

Before Sitharaman, a long-standing colonial tradition in connection with the budget presentation was broken during the Atal Bihari Vajpayee government when the then Finance Minister Yashwant Sinha presented the Budget at 11 am rather than at the traditional time of 5 pm.

Since then all governments have been presenting the budget at 11 am.

The tradition of carrying the Budget briefcase was a British legacy. The word 'Budget' originated from the French word 'bougette', which means leather briefcase.

The "budget case" tradition started in the 18th century, when the Chancellor of the Exchequer or Britain's budget chief was asked to 'open the budget' while presenting his annual statement.

In 1860, the then British budget chief William E Gladstone, carried his papers in a red suitcase with the Queen's monogram in gold. Budget briefcase came into being because Gladstone's speeches were extraordinarily long and he needed a briefcase to carry his speech papers.

India's first finance minister RK Shanmukham Chetty carried a leather portfolio to present the first Budget in 1947. TT Krishnamachari in the 1950s carried something that looked like a file bag. Jawaharlal Nehru carried a black briefcase.

Piyush Goyal, who presented the interim Budget in February 2019, was the last finance minister to have carried a briefcase. He carried a red one to Parliament.

On Budget day, the Finance Minister of India poses with the Budget bag outside the parliament. In Britain, the Chancellor of the Exchequer poses with his suitcase in front of 11 Downing Street before Budget speech.

Soon after presenting her maiden budget in 2019, Sitharaman had said that Bahi-Khata was a break from the colonial legacy.

"Why did I not use a leather bag to carry budget documents? I thought it is high time we move on from the British hangover, to do something on our own. And well, easier for me to carry too," she had said.

One of her predecessors, P Chidambaram of the Congress, had however scoffed at her choice in that year. "A Congress finance minister in future will bring an iPad," the former Finance Minister had said, when asked to comment on the Bahi Khata.