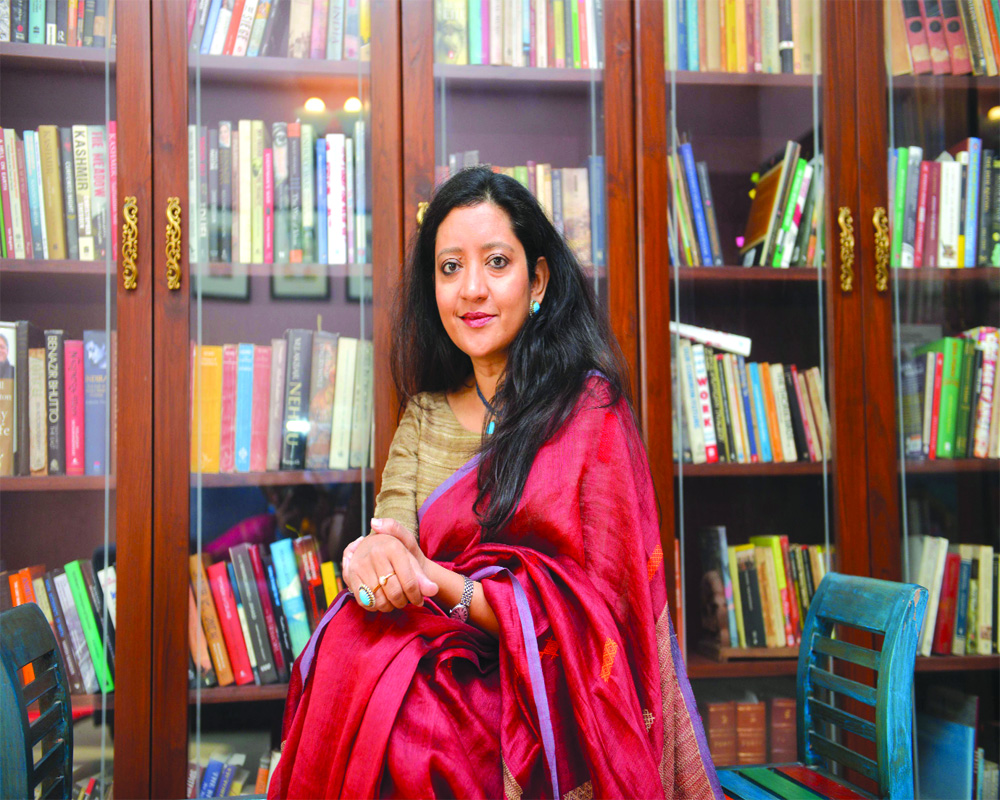 Ghazala Wahab’s Born A Muslim: Some Truths About Islam in India won the Book of the Year Award at the Tata Literature Live! Festival for the year 2021 in the non-fiction category. In a conversation with Saimi Sattar, she talks about the reasons for the demonisation of the community, the history of institutionalising violence and more

I had heard of Ghazala Wahab, the person — long before her book, Born A Muslim: Some Truths About Islam in India, started making waves — through a common friend. And not surprisingly, when we connect over a concall, the name comes up as the ice breaker. But other connections hover beneath the obvious and the stated (co-religionist woman from a small-town middle-class family who does not harbour fundamentalist thought) make what she says easy to comprehend while creating parallel narratives in my head.

Wahab, a journalist with many years behind her, has woven a personal narrative with a historical perspective. The intensely personal account seeks to understand how Islam, which has put down its roots in the country, has become so reviled by a section of the right-wing. This quest has been awarded the Book of the Year at the Tata Literature Live! Festival for the year 2021 in the non-fiction category the work.

Excerpts from the interview:

What prompted you to write the book?

The origin of the book was in my writing on terrorism. It was here that I came a lot across what we call Jihadi or Islamic terrorism. And these terms used to bother me as I was also sold out on the idea that there was indeed terrorism in the world. One of the threats that India faces is terrorism and I completely agreed with the idea that a lot of terrorists were Muslims. So, my approach was researching what is in the religion that prompts Muslims to engage in these acts of violence. And that’s how I got interested in the subject. But my entire perspective on terrorism changed. This was the starting point.

Coming to an understanding is one thing but reaching out to a larger audience by putting this on paper is another. Did that happen organically or was it a conscious decision?

The conscious part was that I wanted to write about what I thought was a misconception about Islam among Muslims. How they understood a lot of verses and how they should not be taken out of context as these were revealed at a particular time answering to a particular problem and should not be taken to be directions for perpetuity were the issues that I was looking at. Then, there was the hijab and full-face covering... issues that I felt strongly about which I felt needed to be criticised. It was a conscious decision to write this and reach out to as many Muslims as I could. Telling them how they had misunderstood their religion and how due to this misunderstanding and their doggedness, they have allowed their religion to become a subject of ridicule.

When I started reaching out to a cross-section of society, I realised that my approach was one-sided. I enlarged its scope because this idea of identity politics or the community sticking to an identity largely stemmed from insecurity. So, I realised that the sources of this insecurity had to be understood. Were there internal or external reasons? And that is how the scope of the book continued to grow. What you see is the result of this.

There is a chapter about your family facing police action post riots. There were riots in North East Delhi and it has been alleged that the police action was one-sided. Would you say there are parallels?

If you just draw a parallel with NE Delhi riots then it would be reducing the subject to just one particular incident. We have had a history of communal violence in India. A lot of times we call them communal riots but, more often, it is one-sided violence. What had happened to us was not particular to us. A lot of people had faced attacks on lives and property and were subjected to police action against them in the name of maintaining law and order. This has been a trend. So, there have been various incidents of violence post-Independence. This is a playbook that has not changed with time. These have happened time and time again. It is unfortunate but true.

No, I wouldn’t say that. It was already institutionalised in the manner in which law enforcement agencies would blink and look the other way for a few hours till a particular mob or community could vent their anger. They would let the ‘milk boil over’, so to say. If some people lose their lives or properties are burnt during the time, it was considered to be a small price to pay. I’ve forgotten the resource right now but Indira Gandhi has recorded in the case of Hindu-Muslim violence that there are certain occasions where you have to let the events take their course before the police can intervene. I don’t remember the context in which she said this but it is on record. (“One has to let such events take their own course before stepping in,” said the former Prime Minister Indira Gandhi, while replying to Financial Times when asked why she had not acted earlier to stop the violence during Assam's Nellie massacre of February 18, 1983, when the State was under President's Rule.) The worst part of this institutionalised ‘look the other way approach’ by the law enforcement agencies is that you don’t question law enforcement agencies as you worry or fear that it will affect or impact their morale. Commissions are instituted but the police hierarchy is not held accountable. Charge sheets are filed against unknown people. This idea of holding people accountable is just not there and it is nothing new.

What we have now are a lot of vigilante groups that are doing the dirty work. This has created a pervasive sense of fear which was not there earlier. I have not grown up with it. When I was growing up or people I have spoken with say that the violence was a periodic event. Things would heat up and then they would calm down. Things would go back to usual. It did not lead to any wholesale relocation or fissures. People would move to Muslim majority areas because there is security in numbers but a permanent fissure in society, where you have to constantly watch your back, did not exist. If you had business interests, which were inter-community, you would go back to working with them. All that has changed to some extent.

As you point out, you had not experienced this kind of discrimination or violence but people lower down in economic and social status did. Was it easier writing it as an outsider-insider?

I wouldn’t say it was easier though it did give me the advantage of access. People did talk to me as I was an insider and from the community as well as a journalist who had not written on the community but had a larger perspective on national issues as I had a large body of work out there in the public domain. This put me at an advantage. I wouldn’t say it was easier because writing about violence never is or maybe I am a little sentimental about these matters. When I write on warfare or terrorism, I bring a certain human element to these issues. I do develop a certain emotional connection. When I was writing about communal violence and tracing its history post-Independence, it was a very disturbing experience. Writing this tract was the most difficult part of the book. I did not sleep for many many nights after writing this chapter

You’ve been the editor of Force, a magazine for Defence, for a long time. Did that change your perspective given that not very many Muslims are a part of the armed forces?

No. I had not done any work on the community except for writing on terrorism. I have not really engaged with the Indian Muslim community before I started work on the book. It did not prepare me for anything when I started writing this book. As for not many people being in the armed forces but there are not many Muslims in any of the mainstream Government organisations whether it is Civil Services or others. The numbers are very limited.

Treating Muslims as a monolith who are not patriotic is something that has gained credence despite evidence to the contrary... Where did the community go wrong which led to the building of this narrative?

When a narrative is built, it has little to do with the community. It is being built by others. Treating Muslims as a monolith is just facilitating stereotyping. If you go into details and diversities, the stereotype will just fall flat. That is deliberate.

The community cannot be held responsible as a Muslim cannot do anything to change perspective. They are doing whatever they can or whatever anyone in India has done. Even today when you pick up the newspaper and you see someone selling a defence secret, I think, a lot of Muslims scroll down immediately to check the name of the person and are relieved to see that he is not a co-religionist. I am also guilty of doing that. Despite all this, being accused of being fifth columnists or not being patriotic enough is a perception created by vested interests. And unless it is reversed by those who have created this perception or by the majority community who stand up and say this is false and we won’t go by it, Muslims can’t do much about it. They are the victims here.

Was your book aimed at changing these perceptions?

Yes (a very thoughtful one). And I have said that in my introduction that it allays a lot of misconceptions both among the Muslims and also among the non-Muslims. I hope that people can sift between the myths and realities of the community in India. And that they start talking to each other and understand each other better.

Would you say that the kind of violence Muslims face has changed over the years?

It has become more widespread. Big events of communal violence may have reduced but everyday incidents of violence have actually increased. The consequence of this is that an increasing number of Muslims are not getting a place in the mainstream and are rather relinquishing the space to recede to their ghettos. A non-Muslim professor told me that many of his colleagues who had properties in south Delhi have sold these, often at a loss, to go back to Okhla and Jamia because they felt that they will be safer and more comfortable there. Ideally, that should not be happening. They should not be ceding these places which have been acquired with much difficulty. But if you are so insecure, it is unfortunate and should not have happened.

Did you anticipate the book would win a prize?

No, I didn’t it was a very very pleasant surprise.

What did you hope the readers would carry back?

They apply the rational part of their mind rather than the emotional and they would realise that the answers are all there in the public domain. They would realise what they are told is not correct and it is not difficult to find the truth.

Any more books coming up?

I am working on one book ad it would be out in a year and a half or two years.