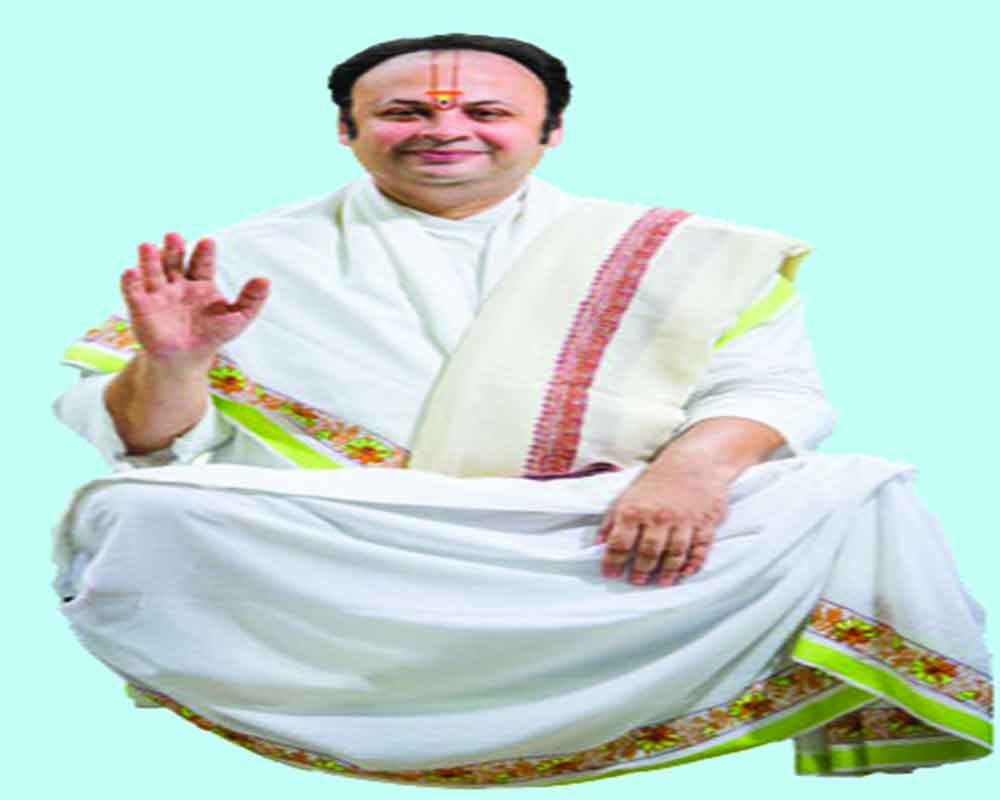 A Vaishnav does not harbour negative feelings of hatred, jealousy, envy, and so on, and treats everyone with respect, equanimity and equality

Vaishnavism is one of the major forms of modern Hinduism, characterised by devotion to Vishnu and his incarnations. A devotee of Vishnu is called a Vaishnava. The Vaishnavite tradition is known for the loving devotion to an avatar of Vishnu, and as such was key to the spread of the Bhakti movement in South Asia in the 2nd millennium CE. For Vaishnavas, absolute reality is manifested in Vishnu, who in turn is incarnated in Rama, Krishna, and other avatars. Through his avatars, Vishnu defends traditional righteousness in keeping with the moral law.

Vaishnavism is the worship and acceptance of Vishnu. The various sects of worshippers of Vishnu pray to him in different ways. For some, the goal of religious devotion to Vishnu is liberation from the cycle of birth and death. For others, it is health and prosperity in this life, good crops, success in business, or thriving children.  Vaishnavism comprises many sects and groups that differ in their interpretation of the relationship between the individual and God. It has four main categories of sub-schools: the medieval-era Vishishtadvaita school of Ramanuja, the Dvaita school of Madhvacharya, the Dvaitadvaita school of Nimbarkacharya, and the Pushtimarg of Vallabhacharya. The Srivaishnava sect, for example, emphasises the doctrine of qualified non-dualism of Ramanuja, according to which, although the differentiated phenomenal world is illusory, it is nevertheless the medium through which devotees may gain access to God. Another group professes the dualism of the philosopher Madhva, the belief that God and the soul are separate entities and that the soul’s existence is dependent on God. The Pushtimarg sect maintains the pure non-dualism doctrine of the theologian Vallabhacharya, which does not declare the phenomenal world to be an illusion. The Gaudiya sect, founded by Chaitanya, teaches inconceivable duality and non-duality, the belief that the relation between God and the world is beyond the scope of human comprehension.

HDH Shashth Pithadishwar Puja Pad Goswami 108 Shree Dwarkeshlalji Maharajshree is the chief patron - managing trustee of Vaishnav Innerfaith Pushtimargiya Organisation (VIVO-Global). His Divine Holiness hails from the Pushtimarg tradition of Vaishnavism as the direct descendant of Jagadguru Shrimad Vallabhacharya Mahaprabhuji, the founder of Pushti Bhakti Marg and one of the five great Acharyas in Hinduism. His Divine Holiness is enthroned as the 14th Gadipathi of Shashthpeeth at Vadodara, one of the seven thrones of Shri VitthalnathjiGusainji, the son of Shri Vallabhacharya Mahaprabhuji. He is not only the head at Kalyanraiji Mandir, Vadodara but also at several temples/Havelis in India, the UK, the USA, and Canada. The first supreme omnipresent Jagad Guru Shrimad Vallabhacharya Mahaprabhuji established the Vaishnav religious system to grace upon the Universe, the Divine Grace, also known as Pushtimarg. Jagad Guru Vallabhacaryaji had two Divine Sons - Shri Gopinathji& Shri Viththalnathji-Gosainji. Shri Viththalnathji-Gosainji had seven sons. His sixth son was Shri Yadunathji. Shashtha pithadhishwar Param Puja Goswami 108 Shree DwarkeshlaljiMaharajshri is the 14th Generation of Shri Yadunathji. For the past 13 generations based on the traditions of Shashtha pithadhishwar, he resides on every Gaadi-Pati (Throne) as Raj-Tilak. He is presently residing in Vadodara as Raj-Tilak in Seva of Mohini Swarup Shri Kalyanrayji. This is the same Swarup that Beloved Vallabhacharya ji served (Sevya).

Pujyapad Goswami 108 Shree DwarkeshlaljiMaharajshri is presently the Raj-Tilak Gaadi-Pati of Vadodara, Ahmedabad-Naroda (Shri Mahaprabhaji’sBethakji), Gondal, Baria, (Gujarat), Gokul (Uttar Pradesh), Dhanpur, Shergad (Rajasthan), Vidisha (Madhya Pradesh), Sikandarabad (Telangana). Likewise, in Atlanta-Gokuldham, Ocala-Pushtidham, Connecticut-Vallabhdham (All-USA) &Leceister-Shreeji Dham (UK). Moreover, he is serving various other religious establishments around the world as an advisory. From a very young age, Puja Maharajshree has been an inspirational religious, social and cultural leader as well as a guiding force for the young and old alike and strong support for the disadvantaged members of society. He has motivated thousands of youngsters to embrace Pushtimarg through various religious, cultural, educational, and charitable institutions throughout India and the world. Over the years, HDH has been honored for His profound philosophical and poetic writings as well as for His religious, social, and humanitarian work. He is a renowned Pushti Margiya Propagator, Philosopher and Teacher. He appreciates antique collections and art &artistry. He is very proficient in playing Mrudang (Pakhawaj) in Music Area. He is articulate in preparing and adorning jewelry for Shree Thakorjee. He has written several ongoing poetries in Gujarati, Hindi & Vraj Bhasha. He is the author of various religious and philosophical articles and texts. He has an interest in ancient & modern, known-unknown Gazals’ collections. He displays a keen interest in national geographic and current affairs of past and present times...

He has received several accolades and awards including the prestigious “Glory of Gujarat” award in 2015 for promoting social well-being, Indian culture, and religion as well as for His valuable contributions to economics and religious research. Most recently in August 2021, His Divine Holiness was awarded an honorary doctorate by North American University, USA.

Puja Maharajshree continues to travel tirelessly throughout the world. HDH Dwarkeshlalji Maharajshree enlightens the world on the specifics of terminology commonly used by followers of the Vaishnav cult.

Who is a Vaishnav? Anyone offering divine loving services to Lord Shree Krishna by dedicating and finding refuge in Him is called a Vaishnav. A Vaishnav does not harbor negative feelings of hatred, jealousy, envy, etc., and treats everyone with respect, equanimity, and equality.

What is Inner Faith?Inner faith is the divine love one experiences after realising Shri Krishna’s true nature. It is the recognition of the all-pervading nature or Brahmavad essence of God within ourselves and in the world that gives a positive outlook and attitude towards life and creates respect, understanding, and awareness of oneself as well as others. Unyielding faith originating from one’s experiences of God’s omnipotent presence can lead to extraordinary experiences which are practical and liberating. In this state of liberation, one merges into Shri Krishna’s blissful form and no caste, creed, color, sex, or age prevents one from attaining Shri Krishna’s grace. It transcends all boundaries of identity, time, space, and place.

What does Pushtimargiya mean?Pushtimarg also known as “The Path of Grace” is a Vaishnav sect of Hinduism established by Jagadguru Shrimad Vallabacharya Mahaprabhuji, one of the great Acharyas of Hinduism. “Pushtimargiya” is spontaneous, selfless, motiveless love for LordVaishnavism theology, descend to empower the good and fight evil, thereby restoring Dharma. This is reflected in the passages of the ancient Bhagavad Gita as: Whenever righteousness wanes and unrighteousness increases, I send myself forth.

For the protection of the good and for the destruction of evil,and for the establishment of righteousness, I come into being age after age.

(The writer is Editor-in-Chief of Opinion Express.The views expressed are personal.)