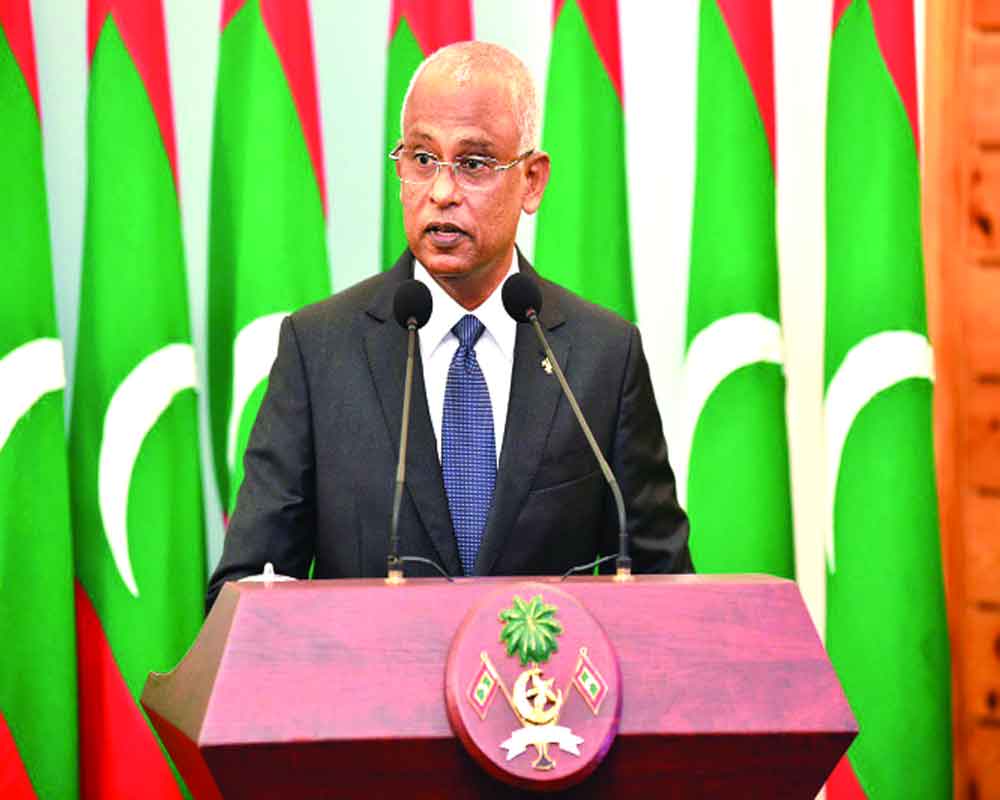 India is helping Maldives have a better maritime surveillance system

President of Maldives Ibrahim Mohamed Solih was in India this week, where his itinerary included meeting the President, Prime Minister, other senior government ministers and business delegations in Delhi and Mumbai. This high-level visit by the Maldivian President comes at a time when the relations with India are on a path of reconstruction.

Abdulla Yameen, the second democratically appointed president of the island nation and head of opposition party, Progressive Party of Maldives (PPM), was known to be openly pushing for a pro-China policy vis-à-vis Indian interests. His five-year tenure from 2013 to 2018 has been widely criticised for infringement on human rights, freedom of speech and expression.

He was charged with money laundering and put in prison. However, a local court acquitted him of the charges last year. This acquittal has emboldened his party to pursue the ‘India Out’ agenda, where the ex-president is widely seen sharing stage with anti-India supporters.

Yameen has stated that if his party returns to power in 2024, they will cancel all ongoing agreements with India. India had in 2021 signed an agreement for providing financial assistance and developing the largest infrastructure in Maldives called Greater Male Connectivity Project (GMCP).

The GMCP will involve building a nearly seven kilometres long bridge and other links from capital city Male with three neighbouring islands. Almost 40 per cent of Maldives’ population resides in the capital, while the rest are spread over across the 1200 islands dotting the Indian Ocean. Remote islands rarely have healthcare or educational facilities for the residents and many have to travel to the capital for most of their needs.

Boats and ferries are the principal means of transport from the capital to these islands and a rough Indian Ocean during most times of the year makes things difficult. A link via bridge has been seen as a crucial requirement for uplifting the lives of citizens in this island country.

India is also developing and maintaining a coast guard base at Uthuru Thila Falhu, which, according to both governments, is being done to help Maldives have a better maritime surveillance system in place. During the recent visit of Solih, both governments signed at least six MoUs and India reviewed another USD 500 million worth of financial assistance to Maldives.

India also announced gifting 24 utility vehicles and replacement of an old ship, CGS Huravee, to Maldives defense force. This security cooperation between the two countries has been singled out by the ex-president Yameen, who has termed it as Maldives selling its sovereignty to India and providing unfettered access to Indian soldiers in the region.

The second challenge Solih, who leads the Maldivian Democratic Party (MDP), faces is with his partner in government, who is also Parliament Speaker Mohammed Nasheed. It is understood that the Speaker, who has also been an ex-president, seeks a Parliamentary system of government.

Solih has far resisted the move, which could be a cause of concern going forward, given the fact he was a coalition choice.

Geographically, Sri Lanka and India are two closest South Asian neighbours of Maldives. Located at a strategic juncture in the Indian Ocean, Maldives serves as an important post in the global maritime trade and traffic flows. It is worth noting that the fate of Sri Lanka has fallen with its huge dependence on Chinese money for building key infrastructure projects. Maldives can also be similarly persuaded to tilt towards China, unless India continues to enhance its strategic and economic ties.

(The writer is a policy analyst. The views expressed are personal)