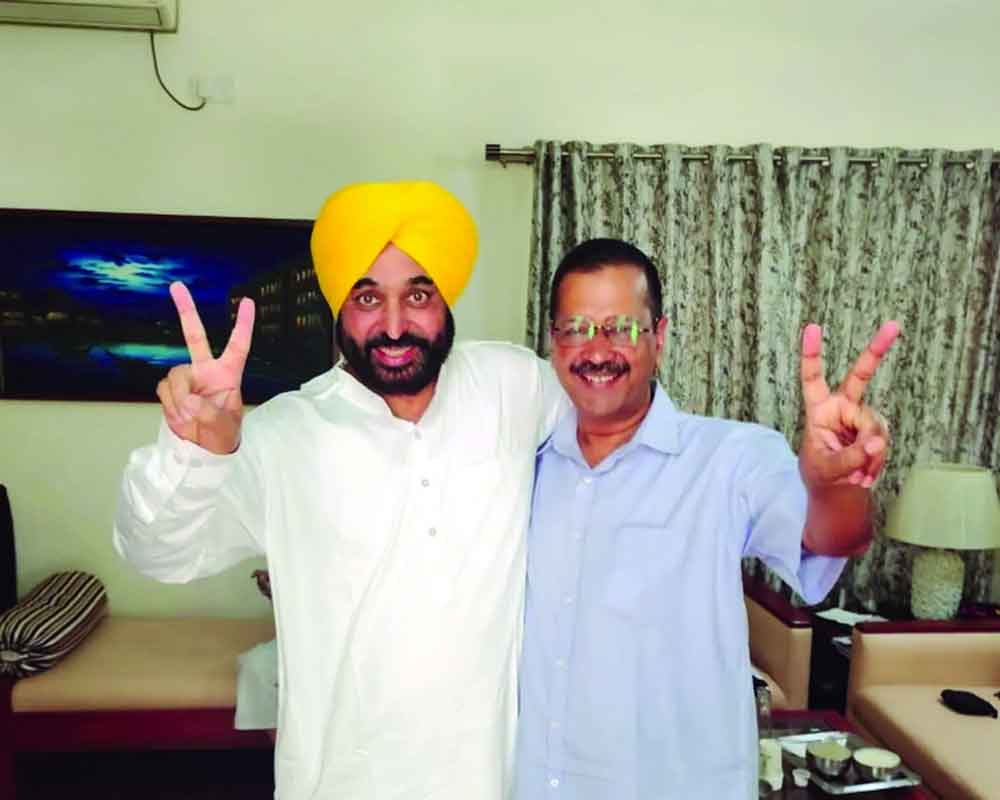 The spectacular win in Punjab could make Arvind Kejriwal shift his focus to Gujarat, which is going to polls later this year

The Aam Aadmi Party (AAP) has done a Delhi in Punjab. It swept the Delhi Assembly elections in 2015 winning 67 seats of the 70 seats. Cut to 2022, it won more than 90 of 117 seats in Punjab. In the process, it ended the two-party (SAD and Congress) dominance in the northern State by emerging as the third alternative. AAP convenor and Delhi CM Arvind Kejriwal announced to go national, buoyed also by two seats with 6.67 per cent vote share in Goa. It has made an entry into Gujarat and trying to get a foothold in Uttarakhand and UP. AAP’s big win in Punjab is also an indication of India’s changing political landscape.

With Congress having weakened significantly, it is the regional parties like AAP, TMC and DMK that are halting the BJP juggernaut. Led by Delhi Chief Minister Arvind Kejriwal, the 10-year-old party is already bringing significant change, and later this year, it would be interesting to keep an eye on itsvote share in Gujarat, the home state of Prime Minister Narendra Modi. The main challenger for the BJP is now AAP.

Promise of better public services, good quality schools and hospitals, which got the AAP two consecutive terms in Delhi, remained the consistent campaign theme for Kejriwal’s party in Punjab. Caught in a multi-cornered contest along with Congress and the Shiromani Akali Dal, Kejriwal had unveiled a 10-point ‘Punjab Model’, drawn from its model of governance in Delhi, and assured the voters of creating a new-age, prosperous, and forward-looking Punjab.

The emergence of AAP in Punjab is an indication that the people there are fed up with the binary of the Akali Dal and Congress that has dominated its politics for decades, ever since the state was formed. It wants to give the AAP a chance to tackle its many woes. It does not want the elderly, do-nothing, Captain Amarinder Singh in another configuration. It rejects the noisy, Pakistan/ Khalistan-loving Navjot Sidhu, and the sudden emergence of Christian-Sikh Charanjit Singh Channi. It would not countenance the corrupt Badals yet again.

AAP has had a roller coaster ride with a meteoric rise in the 2014 parliamentary polls but nosedived in the 2017 assembly elections. It won 20 seats with a vote share of 23.7 per cent in the last assembly elections, but didn’t announce a chief ministerial candidate. The silence sparked speculations that Arvind Kejriwal wanted to become the Punjab chief minister. However, this time around, the party did not repeat the mistake. It declared its Sangrur MP, Bhagwant Singh Mann, a popular Sikh face in the Malwa region, as its chief ministerial candidate.

AAP learned from its previous mistakes in Punjab when it was hesitant to put faith in local leaders. In 2016, it removed its State president Sucha Singh Chhotepur over corruption allegations. The party’s attempt to remote-control the state from New Delhi failed in 2017, where it was restricted to 20 MLAs in the 117-State assembly. AAP has come a long way since.

The party’s splendid performance is going to create ripples that could lead to realignments at the national level too. Political observers see it as an endorsement of Kejriwal as a prospective national leader against Prime Minister Narendra Modi. The spectacular win in Punjab could make Kejriwal shift his focus to Gujarat which is going for polls later this year. AAP has already made considerable gains in the civic elections in Gandhi Nagar and Surat last year.

AAP, ruling in Delhi for the past seven years, has come with a model of governance (Delhi Model) that encompasses its policies and programmes including free power and water supply, free bus travel for women and fighting corruption. Political experts feel that AAP will make its presence in some more states on free water, free power and free bus travel in the coming elections.

(The writer is a senior journalist with The Pioneer. The views expressed are personal.)