The missing Chief of Defence Staff

The missing Chief of Defence Staff 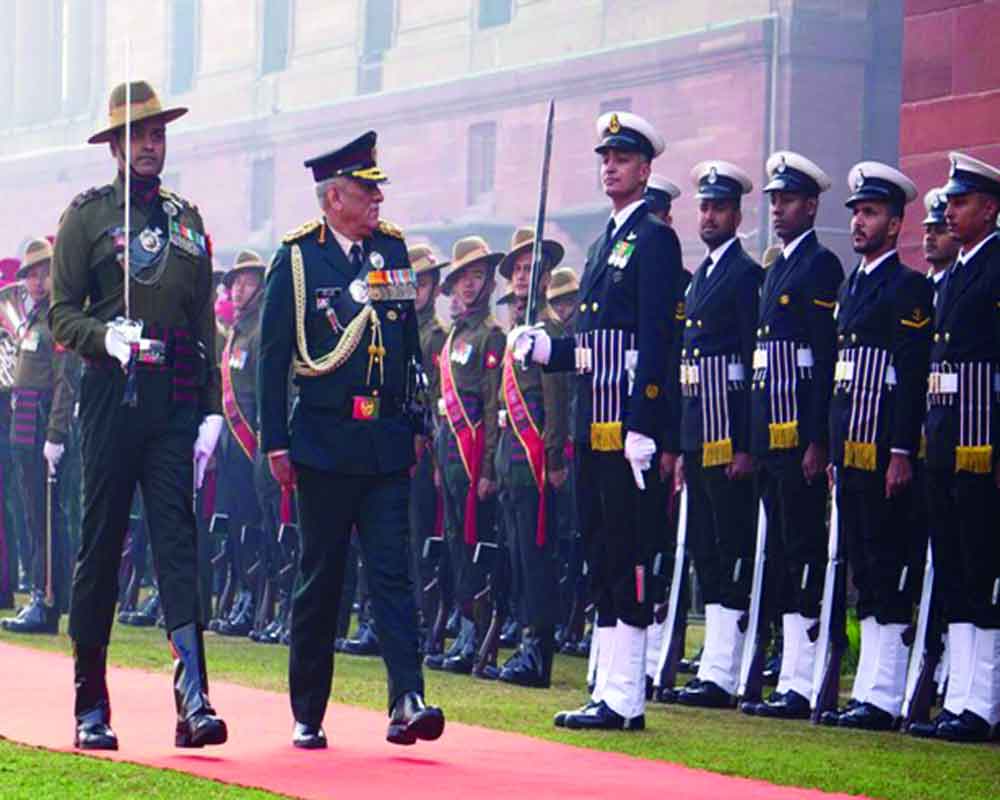 Conventional wisdom would suggest that the senior-most, Air Chief Marshal Vivek Chaudhari be made CDS and Permanent Chairman Chief of Staff

For five months, India did not have a Chief of Defence Staff (CDS) after the tragic death of Gen Bipin Rawat on  December 9 last year. COAS Gen MM Naravane, who was given ‘additional charge’ and appointed ‘officiating’ CDS as a stopgap measure, retired on  April 30. Gen Manoj Pande took over as COAS the next day so that there was no void in the Army chain of command. But the CDS post fell vacant as no one has been appointed permanently or in an officiating capacity after  April 30. This deficiency may continue as Prime Minister Narendra Modi is traveling abroad and nothing as significant as appointing a new CDS, a personal passion for him, can materialize  till he returns tomorrow. As  Modi runs a tight ship, decision-making rests with PMO. Hence delays in appointments like CDS and ambassadors. Nepal, a high brand strategic country in India’s neighborhoods First policy is without an ambassador.

NSA Ajit Doval who accompanies Modi during his foreign travels and whose sterling hallmark enhances with seasons has added to his titles of ‘spymaster’ and James Bond, the label of ‘grandmaster of geopolitics conferred on him by former Maldivian President Nasheed. In short, Doval not Defence Minister Rajnath Singh will help Modi in selecting the CDS. Just two persons constitute the Appointments committee.

For BJP, CDS was so vital for national security that it was included in its election manifesto. And therefore the fanfare that accompanied Rawat’s appointment as the first incumbent. The Government has not shown similar urgency in appointing CDS after Rawat’s demise. The widely expected elevation of Gen Naravane to CDS did not happen. Let us study the options the government might be considering.

The Naravane option may be ruled out as he has bid adieu to Supreme Commander of the Armed Forces, President Kovind.  In the past, the President would host a dinner for the retiring COAS. This time it was merely a call-on. The second option is appointing a retired service Chief and the name of former CNS Adm Karambir Singh is doing the rounds. It’s a sound decision to remuster a former Chief and redeploy him. A CDS other than from the Army will be reassuring for the other two services who feel overwhelmed by the operational and numerical dominant Army. Also, it will take the sting out of some of Rawat’s ill-considered remarks like ‘Air Force, like artillery, is a supporting arm’. The question in this ‘resurrection of the retired’ for CDS is why did the government have to wait for six months to do so?

Instead of appointing Gen Naravane as officiating CDS, the second option could have been implemented. Barring the name of the Admiral, which has appeared in a personal blog, no name has been floated in the mainstream media.

There is a third option: kick upstairs one of the three serving chiefs. Conventional wisdom would suggest that the senior-most,  Air Chief Marshal Vivek Chaudhari  be made CDS and Permanent Chairman Chief of Staff. The government may have considered other options too. An option the government eliminated quickly was appointing Gen Naravane as CDS soon after Rawat or now another officiating as it did earlier. The first would have entailed locating a COAS from its seven Army Commanders club (including Army Training Command) to replace Naravane. But as I have written earlier on this page, that would have upset the line of succession - applecart according to which Gen Pande would succeed Gen Naravane after 30 April. Clearly, the government had its eye on Gen Pande as COAS and did not wish to create another supersession controversy as it had when Gen Rawat superseded two senior Generals to become COAS.

In order to have a COAS of its choice and not disturb the chain of seniority, the government let a Vice Chief of Army Staff and an Army Commander retire by 31 January and another Army Commander (all senior to Gen Pande) superannuate on  March 31. In mid-April, with the grass mowed, Gen Pande’s appointment as COAS was announced. Normally the COAS appointment is made public three to four months before he is to assume command. That obviously could not happen as three Generals senior to Gen Pande were in the way of his promotion.

Much has been written about Gen Pande’s combat engineer background and that he is the first Engineer officer to breach the red line as COAS. The balance will come from   Infantry  Lt Gen, BS Raju as VCOAS. He is professionally highly rated: served as a military advisor in Bhutan, commanded the Srinagar Valley Corp, and was Director-General of Military Operations.  He is a graduate of Royal College of Defence Studies London and will make a great team-mate for Gen Pande.

By delaying the appointment of a permanent CDS, the government may be having second thoughts on the transformative reform of creating the Department of Military Affairs leaving the defence secretary with just policy and a peripheral charter. The pushback from Defence Secretary to reclaim lost turf is palpable. The five-month and counting  CDS void created opportunities for civilian bureaucracy to restore its ‘control’ over the military. Still a CDS is urgently needed.